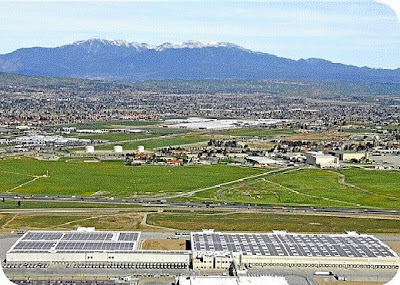 The 800,000-plus Tesco Fresh & Easy Neighborhood Market distribution center pictured above includes 500,000 square feet of roof top solar energy panels, as you can see in the photograph. Tesco says the massive solar panel array and system provides about 70% of the building's total energy needs. One doubts this "green" aspect of the distribution center would need an "environmental review," since the impressive roof top array and solar energy system is among the largest of any commercial building in the U.S

The Tesco Fresh & Easy distribution center is located on land that once was a U.S. Air Force base and is now the Meridian Business Park, located off of Interstate 215 in Riverside County.

The original ruling against Tesco was made by a judge in response to a lawsuit filed by a non-profit citizen, health and environmental organization in Southern California called Health First. The United Food & Commercial Workers (UFCW) union, which is attempting to organize Tesco Fresh & Easy store-level employees, was supportive of the Health First lawsuit.

When the Fresh & Easy Neighborhood Market distribution center was built in 2007 it didn't go through an environmental review process separate from the one that the entire Meridian Business Park development went through. Tesco was given approval to take this route by the local March Joint Powers Authority, a government agency that is responsible for all development on the former U.S. Air Force land. The authority approved Tesco's plans for the distribution center.

However, Health First argued that projects the size of the Tesco Fresh & Easy distribution facility need to go through separate, individual environmental impact reviews. Lawyers for Tesco and the March Powers Authority disagreed. As a result, Health First filed a lawsuit; the lawsuit the Superior Court judge agreed with.

Tesco and the March Powers Authority then appealed that judge's ruling to the Riverside-based state appeals court, which ruled in favor of the two parties on Thursday, overturning the judge's decision and ruling against Health First's lawsuit on the appeal. [We reported on the appeal on April 16, 2008 here: Tesco and Riverside County March Joint Powers Authority File Appeal Over Fresh & Easy Distribution Center Environmental Review Court Order.]

The appeals court decision isn't final yet though. Health First's legal counsel has the right to offer oral arguments against the appeal to the court.

If Health First decides to go this route then Tesco's and the March Powers Authority lawyers also will make rebuttal oral arguments. If that happens then the court will either uphold its ruling after completion of all the oral arguments or reconsider it.

As it stands right now, the appeals court's decision is set to become final in March if Health First decides not to further pursue the case further by offering the oral arguments.

The appeals court's decision is an extremely positive one for Tesco because had the court agreed with the previous judge's decision, the company would have had to temporarily close the Riverside County Fresh & Easy Neighborhood Market distribution center and pay to have a complete environmental impact report conducted on the facility, which could take as long as a year to do. Further, it's possible that such a review would end up requiring Tesco to make numerous expensive changes to the facility or even close it all together.

The facility is Tesco's only one. All of the about 112 Tesco Fresh & Easy stores in Southern California, Nevada and Arizona receive fresh foods and grocery products from the Riverside County distribution center.

Had Tesco been forced to shut it down, even temporarily, it would have had to find an alternative way to distribute products to its stores. Such an alternative would be very expensive and disruptive for the grocery chain, particularly because the distribution center also includes a kitchen facility where the grocer prepares and packages all of the fresh, prepared foods items sold in the stores. It would be near impossible to find an alternative to the kitchen based on the centralized way in which Tesco's Fresh & Easy operates its prepared foods program.

Tesco also pre-packages most of its fresh produce and meats at the distribution center. The pre-packaged fresh foods are then shipped that way to the stores. This centralization process also would have made it difficult and expensive for the grocery chain to find an alternative had it been forced to close the facility.

Based on the appeals court ruling on Thursday, it's likely that even if Health First goes forward with the oral argument phase, that the court will uphold its Thursday ruling. As of yesterday, Health First had not indicated to the Riverside-based appeals court if it plans to go forward with the oral arguments.
Posted by Fresh & Easy Buzz at 3:46 PM