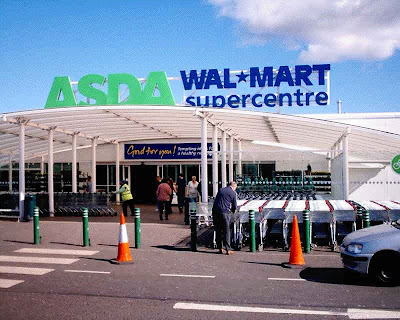 Arkansas, USA-based Wal-Mart, the number one corporation and retailer in the world, and United Kingdom-based Tesco, the world's third-biggest and the UK's number one retailer, have commenced a full-scale "cross-Atlantic" grocery retailing battle, after Wal-Mart announced yesterday a major expansion program in the UK for its Asda supermarket chain.

The battle also is joined in the U.S., where Tesco is challenging American food retailers including Wal Mart (which is the number one grocery market share leader in the USA) with its Fresh & Easy Neighborhood Market venture.

In less than four months, Tesco has already opened 50 of its small-format (average 13,000 square feet), combination basic grocery and fresh foods' convenience-oriented Fresh & Easy grocery stores in Southern California, Arizona and Nevada. The British retailer plans to have 200 of the grocery markets' open in California and the other two Western U.S. states by the end of this year, with many more coming in 2009.
To fight back against British invader Tesco's Fresh & Easy Neighborhood Market on its home turf in the U.S., Wal-Mart will open its own small-format grocery store version named Marketside this summer. The first three -to- four stores will open in the Phoenix, Arizona metropolitan area. The first Marketside stores will be located very close to existing Fresh & Easy grocery markets in two Phoenix suburbs.
The publication Natural~Specialty Foods Memo has an analysis piece which was published yesterday that discusses and analyzes the Wal-Mart/Tesco competitive battle and how it's heating up in both the United States--with the small format grocery stores--and in the United Kingdom, where Tesco and Wal-Mart/Asda operate numerous different format grocery, combination and general merchandise stores, including superstores and hypermarkets.
We suggest the piece to our readers as it provides not only a good background on the current battle lines being drawn between the two mega-retailers, but offers analysis on where the situation might be going, as well.
Read the full piece: "Wal-Mart Heating Up the Competition Against Tesco in the UK (As well as At Home in the USA).
Posted by Fresh & Easy Buzz at 5:44 PM

This is interesting. I have shopped in the UK at both Tesco and ASDA. I’m in CA now and have shopped certainly at Walmart years ago and now at Fresh and Easy. The formats are very different between the two countries. I don’t like the produce display format in the UK, but have to say, they let the grocery clerk SIT while they check your groceries. I think the US ought to look at that! It’s revolutionary and humane!!