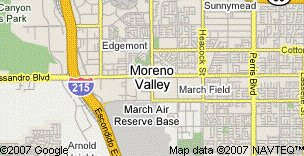 Tesco's Fresh & Easy Neighborhood Market opened its 44th small-format grocery store today in Southern California's Inland Empire desert region, a key market for the grocer. The approximately 13,000 square foot grocery and fresh foods market opened this morning in the city of Moreno Valley, at 2505 Alessandro Blvd @ Parris Blvd.
The huge desert Inland Empire region is a key market in Fresh & Easy's Southern California strategy. The retailer has said it plans to open about 48 stores in the region. It's first Fresh & Easy store opened in the area city of Hemet in late October, 2007. The grocer currently has stores in the Inland Empire cities of Upland, Indio and San Jacinto, in addition to Hemet and Moreno Valley.
Tesco will open the next new Fresh & Easy grocery store in the Inland Empire region on February 20, in Palm Desert, at 72885 Hwy. 111. Palm Desert is an upscale residentail community. It's also a major tourist area, with many people from California having second homes in the city and surrounding area. Its been growing rapidly as well, with many new jobs being created in the gaming and tourism industries. Most forms of gambling are legal in the region because California state law allows Indian Tribes--which are numerous in the area--to own and operate Las Vegas-style casino's, which many tribes do.
Following the opening of the Palm Desert store next week, the retailer will open another new Inland Empire region store on February 27 at 8765 Trautwein Road @ Buren Avenue in Riverside, and a store at 829 W. Foothill Blvd. in Upland on the same day.
Tesco says it plans to have the 48 stores in the two-county (Riverside and San Bernardino counties) region open and operating before the end of 2009. The retailer is shooting for having as many as 300 stores open and operating in California, Arizona and Nevada by the end of next year.
Tesco's Fresh & Easy Neighborhood Market grocery stores average about 10,000 -to- 13,000 square feet. The markets' feature a combination of Fresh & Easy brand private label and nationally-branded basic, everyday grocery items at resonable prices, fresh meats and fresh produce, specialty and organic groceries, and an extensive selection of fresh, prepared foods, ranging from basic items like meatloaf and macaroni & cheese, to upscale items like Thai food entrees, Sirloin Steak Tips in Burgundy Wine Sauce, and indulgent ready-to-eat upscale desert items, for example.
Posted by Fresh & Easy Buzz at 9:07 PM