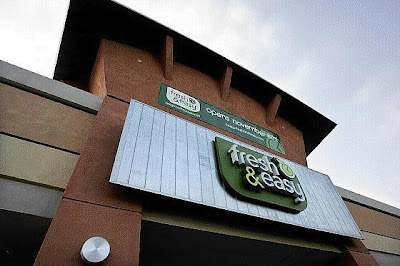 Nielsen based these findings--and numbers--on what it says was an analysis of existing grocery stores located where Tesco currently has opened, and has plans to open in the near future, Fresh & Easy grocery markets in the Southern California, Arizona and Las Vegas, Nevada metropolitan region markets. Kroger Co.'s most prevelant chain in those markets is its Ralph's Grocery Company division.

The proximity of a rival's stores to Fresh & Easy grocery markets has a major impact on weekly sales losses, the Nielsen report says. For example, in Southern California, Arizona and Nevada, Kroger Co. has the highest numer of stores within a five-mile radious of Fresh & Easy store locations.

We frankly don't put much credence in this study at this point in time for a number of reasons.

Second, The major supermarket chains in these three markets--Kroger's Ralph's, Safeway's Von's and its Safeway banner, Wal-Mart and Basha's are all strong grocers. They aren't about to sit back and let Fresh & Easy take millions out of their weekly sales without a big fight.

In fact, Wal-Mart if fighting back by building not only more Supercenters in Arizona, but later this year it will open its first four new small-format stores in the Phoenix region called Marketside as a direct shot across Fresh & Easy's small grocery market bow. Kroger and Safeway are power players, especially in Southern California, where combined they control about 70% of the entire food dollar market share. In Arizona, Basha's is the beloved local guy, and is widely successful. It's the retail grocery market share king in its home region of Arizona.

Lastly, the numbers in the study just don't take into consideration all the dynamics currently going on in these markets. Let's use the Phoenix, Arizona region as an example. Currently, not only is Tesco opening numerous Fresh & Easy stores in the Phoenix metropolitan area, but Wal-Mart is opening three new Supercenters in the region, two 45,000 square foot Neighborhood Markets, and at least the four (maybe more) 20,000 square foot Marketside small-format markets we mentioned above, all this year.

Further, Whole Foods Market, Inc. will open at least two huge Lifestyle stores in the region this year. (One 60,000 square foot Whole Foods Lifestyle store can easily do 700,000 in weekly sales. It likely takes 4-5 of the 10,000 square foot Fresh & Easy stores to equal one Whole Foods store in weekly sales.) Sprouts, a progresssive natural and specialty foods retailer also is opening at least two new stores (about 25,000 square feet) in the area as well. On top of all this activity, Colorado-based Sunflower Farmer's Market, a price-impact-oriented natural foods chain, will open stores (25,000 square feet or so) in the region also this year. Of course, Basha's, Kroger and Safeway all have additional new stores opening as well.

Just as Fresh & Easy can take sales dollars from the existing chains, these new Wal-Mart stores and all the others can take sales from existing Fresh & Easy stores nearby. In other words, its too fluid and too soon to determine with any degree of accuracy how things will shake out for Fresh & Easy in these markets, especially Southern California and Arizona.

Fresh & Easy has five stores currently in the metro Las Vegas Market. They should have more of an impact on taking sales away from existing retailers at this point in time as that market is much smaller. However, because of that smaller market variable, the sales totals on the other hand aren't that significant overall.

The competitive picture in Southern California is similar to Arizona. Along with Ralphs' and Safeways's Vons, which control about 70% of the region's retail food market share, there are numerous major players fighting over that remaining 30%. It will take double the number of stores Fresh & Easy currently has in the market to even begin making serious competitive inroads against the retail leaders and others in the market.

In our analysis, it won't be until about this time in 2009 that a real assessment of Fresh & Easy's impact in these two markets (especially Southern California and Arizona) can be made.

Go Tesco/Fresh n Easy - absolutely delighted that you have come to the colonies bringing certain British products - i.e. British back bacon and a few other items.

We are frequent visitors to Tesco when in the UK and are thrilled that you now have a modest presence here in California - and we hope that you are indeed competition with Kroeger's Ralphs as well as the other supermarkets which have frankly sat back on there laurels for many years and do not offer the same level of customer service/satisfaction as Tesco historically has and for these reasons Fresh n Easy will be successful!!!

Our very best wishes for your continued success and growth!

This blog, Fresh & Easy Buzz, isn't affiliated with Tesco's Fresh & Easy Neighborhood Market in any way. We are an independent blog.

I live in Vacaville & am looking forward to having Fresh & Easy here. I was hoping that the stores would be well on their way to opening by now, but it doesn't seem like there is any activity at all at either site. Any idea what the time frame is????