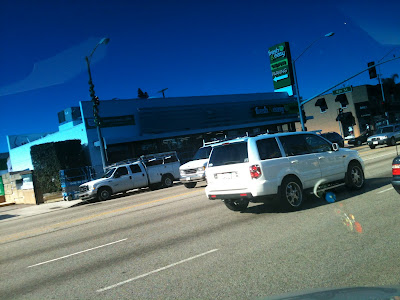 What a difference a week or so makes: New signs on the future Fresh & Easy Express, pictured above. Above photo taken 12/19/11. Photo below from our December 13, 2011 story. Photo credits: Fresh & Easy Buzz. 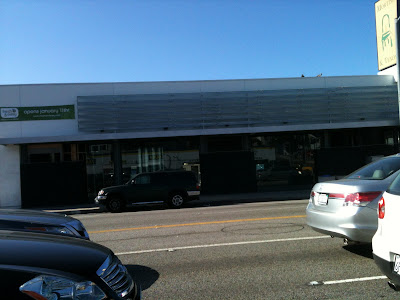 In the story we reported that El Segundo, California-based Fresh & Easy Neighborhood Market plans to open what is calls internally the "F3 store" on January 11, 2012.

The grocery chain hasn't announced the opening date of the Hermosa Beach Fresh & Easy Express store, or the dates of any other stores it plans to open in January 2012.

Since our story came out last Tuesday, Tesco's Fresh & Easy has made considerable progress on the 'Express' store, which is located on Pacific Coast Highway (PCH) and 8th Street in Hermosa Beach.

For example, as you can see in the photograph at top taken Monday, December 19, the exterior of the building, which previously housed a furniture store called Mortise & Tenon, now sports two new signs - the vertical sign directing shoppers to the store's parking lot on 8th Street and the Fresh & Easy signage on the building's facade.

If you take a look at the second photo at top, which is from our December 13 story, you'll see that the two signs weren't on the future Fresh & Easy Express store.

The Hermosa Beach unit is one of four Fresh & Easy Express stores the grocer plans so far to open in early 2012, all in Southern California.

The first Fresh & Easy Express store opened November 2, 2011 in Los Angeles See the November 1 and 2, 2011 stories linked at the end of this piece for details and photographs.

The Tesco-owned fresh food and grocery chain didn't and hasn't announce the specific locations of the stores, mentioning just the cities the grocery markets will be located in.

However, through our reporting and research we've identified the addresses of the 20-plus stores, which we published in this story on November 15: Fresh & Easy Neighborhood Market to Open 20-Plus New Stores in Early 2012 - We Have What's Not in the Press Release.

Of the 135 grocery markets located in California, 105 units are in Southern California. There are 14 stores, seven units each in metro Bakersfield and metro Fresno, in the mid-to-southern Central Valley, and 16 stores in Northern California.

Tesco has opened 29 new Fresh & Easy stores in calendar year 2011. No new store openings are planned the the remainder of the year.

Has anyone noticed if construction on the Fresh & Easy Express store across from the USC campus in Los Angeles has started?

The express stores are actually called F3 stores. Theres also a few F7 (7000 sq ft) shops and of course the f10 which is the traditional sized f&e store.

I don't think there are more than a handful of F7 shops right now. I know Anaheim Hills in Orange County is an f7 and there are a couple more in So. Cal but I'm not exactly sure what cities they are in. I think Walnut Park is also f7 but don't quote me on that. I live in Orange County and don't venture to F&Es in other counties very often. To be fair though, the average person may not even realize it if they were shopping in one of the f7 shops. The product line is pretty much identical to an f10, the only thing you might notice right away is that the aisles aren't as wide, and the shelves aren't as deep. That sorta thing. Hope this helps!

Pretty hard to distinguish with all the fixtures and product on the shelves.

Also, the 3K square-foot size difference between the F10 and F7 stores isn't that significant to the average person, in terms of a visual perspective.

The 3K square-foot Express stores are different of course, as being less than half the size of both the F7 and the F10 stores, the size difference is obvious, along with the much edited product selection.

In terms of the F7 stores, don't believe there are many more than a handful either.

We've suggested before that F&E should test a 20K (F20) square-foot store, like Aldi USA is doing. There are suburban locations where a bigger store would make good sense. Thoughts?

Thanks for your input!

Agreed. I always thought that both the size of the store that Fresh and Easy originally aimed for, around 10k, and also the style of the store, was based on them aiming to emulate Trader Joes and Aldi, so it would certainly make sense that if Trader Joes or Aldi stores start getting bigger Fresh and Easy may dabble in some bigger locations as well.

I live near the Fresh & Easy Express on La Cienega. The store looks nice but my big complaint is there's not enough of a selection to allow us to do all our shopping there. Especially meats and produce. It's a little more than a convenience store but not a full grocery market. We have to split our shopping with Ralphs even though the Fresh & Easy is closest.