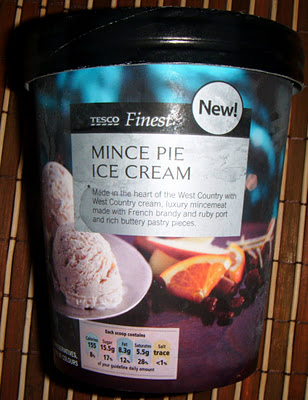 A slice of pie, often with a scoop or more of ice cream on the side à la Mode style, is a post-Christmas dinner dessert tradition throughout much of the world, particularly in Europe and America.

For example, no proper British family would be caught dead without having a mince pie on the cupboard for dessert on Christmas Day.

By the same token, most American families include pumpkin pie as part of their holiday dessert offerings, often along with apple pie, and in some cases even mince.

As any kitchen anthropologist knows, when it comes to pie à la Mode, there are two types of eaters: the ones who like just a bit of ice cream to go along with a healthy slice of pie; and those ice cream lovers who prefer just a smidgen of pie to go along with their ice cream.

Those in the latter camp can rejoice this holiday season - at least if you live in the United Kingdom, California, Nevada or Arizona.

Why: Because Tesco in the United Kingdom and its sibling in America, Fresh & Easy Neighborhood Market, which has 184 stores in California, Nevada and Arizona, are celebrating the holiday mince and pumpkin pie traditions in each respective country with special seasonal ice cream flavors.

Just in time for Christmas, Tesco has come out with mince pie ice cream under its Tesco Finest premium private brand, which it's offering in most of its 2,700-plus stores in the United Kingdom.

The ice cream is the second seasonal Tesco Finest brand product it's come out with a mince pie theme and taste. The other one is noted and pictured in this December 4, 2011 story: 'Merry Crispmas' ... From Tesco.

The Tesco Finest Mince Pie Ice Cream includes mincemeat made with French brandy and ruby port wine and bits of buttery pastry (the crust). There's also citrus and loads of spices, including cloves and cinnamon.

The limited edition ice cream, which is designed to stand alone rather than merely share a plate with mince pie, although mince pie lovers might find themselves "double-dipping" in a like-for-like à la Mode fashion. 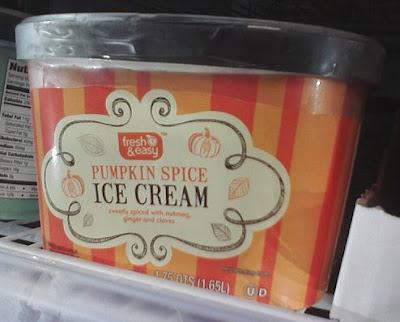 Fresh & Easy, which is owned by Tesco, is offering its own frozen version of pumpkin pie, with its limited edition fresh&easy brand Pumpkin Spice Ice Cream, pictured above.

The ice cream, which retails for $3.99 (1.25 quarts) is spiced with nutmeg, ginger and cloves, similar to how a traditional pumpkin pie is.

Like the Tesco Finest Mince Pie Ice Cream, Fresh & Easy's Pumpkin pie version is also designed to stand alone, although we see numerous à la Mode opportunities. A scoop or two sharing the same plate as a white or vanilla cake might make for a nice taste contrast, for example. Sort of turning the pie (or cake) à la Mode tradition on its head, so to speak.

Mince pie used to be a much more popular Christmas holiday dessert item than it is today in the United States. It remains so for Americans of a certain age but ask most Americans under about age 60 if they would like mince pie for dessert come Sunday and, with some exceptions (British expats for one), the answer will be no thanks.

Pumpkin pie remains a holiday favorite in America though, its popularity usually knowing no age boundaries. For example, here at Fresh & Easy Buzz we know numerous kids as young as 6-years-old and on up who love the spicy custard pies, and not just for the holidays.

But ice cream could be another matter. For example, we've searched pretty comprehensively and haven't found a mince pie ice cream in the United States, perhaps for the reason described above regarding the overall popularity of mince pie in America.

But perhaps those mince pie adverse younger folks might like the pie's flavors offered in ice cream form?

As such, perhaps Fresh & Easy's product developers should consider giving a fresh&easy brand mince pie ice cream a go next holiday season. The recipe is in the family, after all.

And even if younger consumers don't take to it, there's definitely a age 60-plus (which happens to be the fastest growing population cohort in the United States) or so group of people out there in California, Nevada and Arizona that would likely give it a try.

December 5, 2011: The Tesco Christmas Dinner Pizza - A Festive Feast Without the Fork

Readers: Click here to read all past stories in our Private Brand Showcase feature.
Posted by Fresh & Easy Buzz at 6:25 PM

As a Brit, I always think of Christmas Pudding as the Christmas desert, mince pies are usually for tea or supper