The Tesco Christmas Dinner Pizza - A Festive Feast Without the Fork 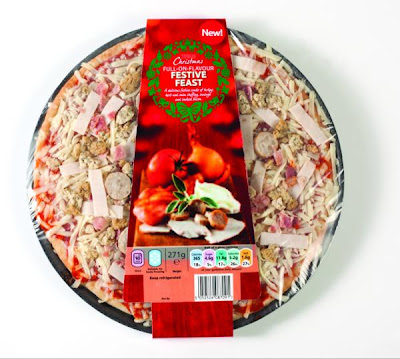 For example, yesterday (read here) we wrote about Tesco's limited edition Tesco Finest brand "Crispmas Dinner" collection, a line (range in British industry terminology) of Christmas dinner-inspired crisps (potato chips) in flavors like mince pie and roasted turkey with stuffing, which it's now offering for sale in its stores in the UK, for the Christmas and New Years' the holiday season.

But saying "Merry Crispmas" to shoppers with its "Crispmas Dinner" snack crisp collection is merely the tip of the festive feast-inspired iceberg of creativity coming from Tesco's private brand product developers.

Enter Tesco's first-ever Tesco private brand Christmas dinner pizza (pictured at top and below), which the retailer is introducing in its stores in the UK this week.

The chilled, ready-to-heat pizza, which is a carnivore's delight, features a turkey, sage and onion stuffing, and is piled high with sausage, smoked bacon and mozzarella cheese.

Here's how chilled foods range product developer Louise Sampson, the proud parent of the turkey and pork-packed Christmas dinner pizza, describes the Tesco holiday creation:  "We set out to create a pizza for all those people who simply can’t wait until Christmas Day for the festive feast and wanted a sneak taste beforehand. We have created a pizza worthy of the big occasion with a stone-baked thin base which allows the toppings to take centre stage."

The timing of the Christmas dinner pizza could be spot on for Tesco.

Why? Because pizza has recently become the most-popular prepared foods item (chilled and frozen) sold in UK supermarkets.

For example, in 2010 British consumers bought a total of 466 million pizzas from UK stores, as compared to a mere 156 million curries, according to data compiled in August of this year by Kantar Worldwide's UK office.

Tesco has been taking advantage of the booming pizza market in the UK - its corporate spokesperson says over the last 18 months its been overhauling, upgrading and developing new pizza varieties, and now offers 119 different refrigerated and frozen pizza varieties in its stores there.

Tesco is the leading food, grocery and general merchandise retailer in the UK.

It has an about 30% market share, according to research firm Kantar Worldwide, which is nearly as much as the number two and three chains, Walmart-owned ASDA and Sainsbury's, have combined, which is about 36%. Number four supermarket chain Morrisons has about 13% .

Together the four supermarket chains are refereed to in the UK as the "Big Four," largely because together they account for nearly 80% of all the food and groceries sold in the nation.

The Tesco Christmas dinner pizza not only is a creative seasonal item for Tesco, it also allows for plenty of food product fun and buzz creation. We're writing about it after all.

The idea of taking the makings a traditional Christmas dinner and putting it on a pizza might seem odd at first. However, with the exception of the turkey and stuffing, the other items - turkey, ham, bacon, onions and cheese - are pizza-topping mainstays. In the case of turkey, we're surprised it isn't used more often than is it as a pizza-topping, particularly since roasted chicken has become a popular choice for more upscale pizza offerings.

Suggestion: Tesco's Fresh & Easy Neighborhood Market chain should jump on the Christmas dinner pizza bandwagon and whip up a limited edition version of its own at its kitchen facility in Riverside County, California.

Why? No U.S. grocery chain offers such an item, for one. But even more so, it would be a fun and attention-getting creation (and in our estimation perhaps even a good seller) - the Fresh & Easy Christmas dinner pizza - for the grocer this Christmas and New Years' holiday season.

The clock is ticking. But there's still time if the Fresh & Easy fresh-prepared foods' product development team obtains the recipe from the mother ship in the UK this week and gets producing, post-haste.

Readers: Click here to read all past stories in our Private Brand Showcase feature.
Posted by Fresh & Easy Buzz at 4:21 PM