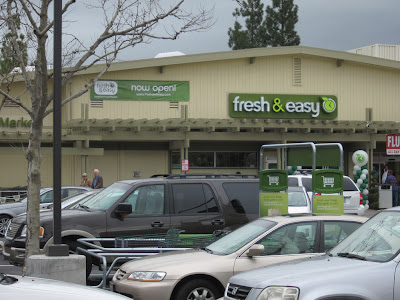 The Fresh & Easy store in Danville, California (pictured above) opened March 2 has about 10,000 square-feet of selling space inside. The San Pedro "Express" unit in Los Angeles will have less than half as much. [Photo: Fresh & Easy Buzz.]

We've now discovered what will  likely be the first smaller-format Fresh & Easy store to open. That unit, in Southern California, will be a 4,000 square-foot store at Sixth and Gaffey Streets (here) in San Pedro, which is a community in and around Los Angeles' harbor area and home to the Port of Los Angeles.

As we reported in January of this year, the Fresh & Easy "Express" format stores will essentially be a smaller and edited version of the 10,000 square-foot Fresh & Easy grocery markets. They will also borrow a couple elements from the United Kingdom-based retailer's Tesco Express (about 2,500-3,000 square-feet) convenience-style stores, which it operates in the UK and elsewhere in Europe.

Fresh & Easy Neighborhood Market has applied to the State of California for an off-sale beer and wine license for the 4,000 square-foot store at the San Pedro location, something we've verified through California's Alcohol Beverage Control Department.

Additionally, a hearing regarding Fresh & Easy Neighborhood Market's application for the beer and wine license is scheduled for September 21 of this year, according to a City of Los Angeles notice we recently reviewed.

In our January story we reported that among the current potential smaller store sites Fresh & Easy Neighborhood Market is looking at in Southern California include at least three locations in Orange County, along with more than one site in Los Angeles and nearby Santa Monica.

According to our sources, assuming it doesn't run into any objections in obtaining the beer and wine license for the store along with incurring other types of delays, Fresh & Easy CEO Tim Mason and his senior staff would like to open the 4,000 square-foot "Express" store in San Pedro around mid-November of this year, although as we always say about new store opening dates at Tesco's Fresh & Easy, they are fluid and dynamic. If the store doesn't open this year, it will open in early 2012, our sources say.

We reported in this December 10, 2010 story [Fresh & Easy Neighborhood Market CEO Tim Mason Says 70 New Stores Possible in Los Angeles Area] that Tim Mason, who since then has become the deputy CEO of Tesco as well as CEO of its El Segundo (Southern) California-based Fresh & Easy Neighborhood Market chain, told members of the Valley Industry & Commerce Association of the San Fernando Valley at a meeting that Fresh & Easy was looking to open up to 70 new stores in the Los Angeles area.

"We've identified 70 opportunities [new store locations] in Los Angeles", Mason told a meeting of the Valley Industry & Commerce Association of the San Fernando Valley (VICA) on December 9, 2010. "If we can open those 70 opportunities, that will be 1,400 jobs, as well as 300 construction workers per-site. We’re eager to invest and we want to get on," he told the group.

On July 12 of this month Mason said in a speech he gave at Town Hall Los Angeles that Fresh & Easy was still  looking at opening those 70 stores, saying as he did in December 2010 that part of the grocer's ability to do so is predicated on it not being bogged down with numerous local government regulations and objections by community and neighborhood groups.

Some of the 70 Los Angeles-area locations Fresh & Easy has identified are, like the San Pedro unit, in the 4,000-5,000 square-foot range and, like the store in San Pedro, will be "Express" units rather then flagship Fresh & Easy Neighborhood Market stores, although the 10,000 square-foot fresh food and grocery market remains Teco's primary format focus in the U.S.

Tesco's primary focus with Fresh & Easy will remain on the current 10,000 square-foot format stores, adding the smaller "Express" units as an adjunct or secondary format.

Are these Express stores also expected to feature only Self-Checkout stations?

G: Based on what we know at present, Fresh & Easy plans to use its same self/assisted-service checkout model in the Express stores.

Of course, if AB 183 passes the California State Senate and is signed into law by the Governor, then that could change to a certain degree in California. If not familiar with the legislation just type AB 183 in the search box in the upper left corner of the blog.

It looks like F&E is eyeing a location at 8th Street and Pacific Coast Highway in Hermosa Beach (just south of Los Angeles) for an Express location.

The location is currently empty and has an application for an alcohol license with F&E's name in posted in the window.

The article doesn't definitively say F&E is planning an Express location, but quotes a political official as saying he thinks it's a "new prototype." Also, the physical structure doesn't look as big as a typical F&E location.

JWE, the 8th Street and Pacific Coast Highway location in Hermosa Beach will be a Fresh & Easy 'Express' unit.

I've seen the building and it looks to be between 4K-5K square-feet to me.

In addition to that unit and the San Pedro location, Fresh & Easy has also signed a lease for an additional unit in Los Angeles. It's in an urban location, as we mentioned in our first story on the 'Express' format.

We will have more specifics on 'Express' in general and those locations soon in an upcoming piece.