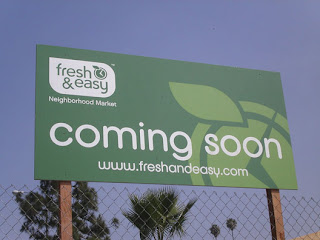 Tesco's Fresh & Easy Neighborhood Market sent out a press release today in which it announced it's hiring for more than 600 jobs for over 20 new stores it plans to open from January-March 2012. You can view the release .

In the press release, which you can view here, Fresh & Easy Neighborhood Market listed 22 cities - 21 in California and Las Vegas, Nevada - where the 20-plus new stores will be located. But the Tesco-owned grocery chain didn't list the addresses of those 20-plus stores in the 22 cities.

But never fear, earlier this month we published a list (at the top-left of the blog) of 26 stores in California that Fresh & Easy Neighborhood Market is currently preparing for early 2012 openings, and has started hiring employees for.

In addition, we included six locations in Las Vegas that Fresh & Easy has been planning to open for a number of years but hasn't, instead closing six stores there a year ago this month. (See the store closing list at the top of the blog for the locations.)

As we note in the list, we don't suspect Fresh & Easy to open more than a handful of the six units in Las Vegas in the January-March 2012 time period. But, as the grocer noted in the press release today, it does plan to open one or more new store in Las Vegas in early 2012.

Below are the specific locations of the 26 stores Fresh & Easy currently plans to open in early 2012. There could be others coming up, and a couple might not make the cut by the end of March for currently unforeseen reasons. But we've identified the units using a variety of sources in our reporting, along with using various research tools.

You'll see numerous publications write about Fresh & Easy's plans, announced today in its press release, but this is the only place you are going to obtain the specific locations - at least for a little while.

You can click here for Fresh & Easy's press release so that you can match up the cities listed in it with the addresses and cities listed below.

We will be reporting on and writing about Fresh & Easy Neighborhood Market's early 2012 new store plans extensively in the coming days, weeks and months. But there are a few takeaways we want to leave you with from our specific location list above and Fresh & Easy's announcement today.

Also key is the fact that Fresh & Easy will be intering three new market regions when it opens the stores in San Luis Obispo (Central Coast), Monterey (Northern California's South Coast) and Sacramento. We will be writing more about this development in an upcoming story.

Lastly, there are currently 184 Fresh & Easy markets. Tesco CEO Philip Clarke has said the United Kingdom-based retailer needs 300 Fresh & Easy units open and operating by February 2013 in order to fit with his strategy of breaking even with Fresh & Easy by the end of the 2012/13 fiscal year, which is over in February 2013, 16 months from now.

It's an achievable task - but neither easy nor in many cases advisable. Tesco has opened under 50 new stores so far in 2011, for example.

The 600-plus new jobs Fresh & Easy says its hiring for, all but a handful in California, is good news for the Golden State, which still has the second-highest jobless (over 12%) rate in the U.S. The highest:  Ironically ... it's Nevada, at 14%-plus.
Posted by Fresh & Easy Buzz at 11:24 PM