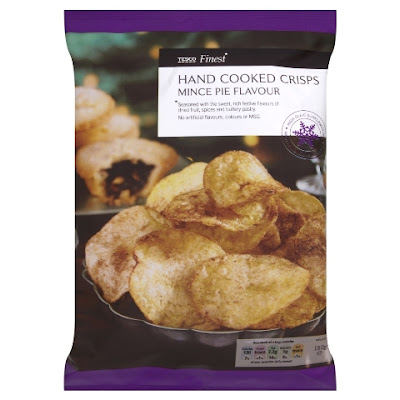 Tesco is wishing shoppers in the United Kingdom a "Merry Crispmas."

The UK-based global retailer has taken some of the most iconic foods and desserts associated with Christmas dinner - mince pie, turkey, stuffing and cranberries - and used them as the flavor inspirations for its Tesco Finest private brand "Crispmas Dinner" collection, which is a limited edition line (range in British terminology) of sweet and savory crisps (potato chips to uninitiated Americans) that it's introducing in its stores in Britain for Christmas and New Years.

The "Crispmas Dinner" collection includes mince pie flavored crisps, which Tesco is billing as the "first ever" sweet crisp in Britain. The hand-cooked mince pie crisps are seasoned with dried fruit, spices and buttery pastry, according to Chris Gee, the crisps' buyer at Tesco in the UK.

Gammon is pork, as in Christmas dinner ham. Specifically, the meat comes from the hind-leg of the pig, which differentiates it from bacon. Wensleydale is an aged cheese produced locally in Wensleydale, North Yorkshire, England.

Tesco, which owns 184-store Fresh & Easy Neighborhood market in the U.S. (California, Nevada and Arizona), is the UK's leading food and grocery retailer and the third-largest retailer in the world, after number one Walmart Stores, Inc. and Carrefour of France. The UK, where it has 3,000-plus stores, accounts for about 70% of Tesco's overall global sales. It has operations in 14 countries.

The Christmas dinner-inspired crisps also have multiple local angles, in addition to the use of Wensleydale cheese, according to Tesco. For example, the snack chips, which are produced in Devon UK, are all made from Hermes variety potatoes, which are grown in Cornwall and Hamshire in the United Kingdom.

"These limited edition crisps have been launched with the party season in mind – we think people will be able to have a lot of fun with them," says snack buyer Gee. "We’ve worked with top crisp-making experts to make sure they taste as special as you'd expect of the grandest meal of the year.

Flavored (including exotic flavors) potato, vegetable and other types of chips and crisps are currently very popular in the U.S., Europe, Asia, Africa and elsewhere throughout the world.

For example, the Terra Chips brand, which features numerous flavors and varieties of potato and vegetable chips, is extremely popular in the U.S. Some of the more exotic chip flavored we've spotted in stores throughout the world include: shrimp, Marmite, horseradish, pickled onion and many others.

This exotic flavor growth-trend in the snack chip or crisp category, combined with the fact that in the case of mince pie, which we're told is thus far the top-seller in the Tesco Finest limited edition crisps' range, is about as British as mum and, well ... mince pie when it comes to Christmas, leads us to the reasoned conclusion that Tesco has hit a home run with its "Crispmas Dinner" collection.

The holiday season crisps are creative (the concept, flavors and positioning), fun (allow for plenty of word play) and in the best spirit of branding tell a story - that story being the taking of some of the most iconic foods of Christmas and using them as the flavor inspirations for a popular snack item - crisps - giving them a holiday season flavor and marketing spin.

And the tag-line potential isn't bad either - "Merry Crispmas."

Readers: Click here to read all past stories in our Private Brand Showcase feature.
Posted by Fresh & Easy Buzz at 5:17 PM

I sure wish they don't bring any more British products here. We reduce and waste most of them because they do not sell.

I don't think Fresh and Easy are in any danger of having this product on their shelves. As far as British goods are concerned it varies from area to area - in many of the San Diego Fresh and Easy stores, where there are a lot of European ex-pats about, the British products (which ironically are mostly produced by American companies such as Heinz, Mars and Kraft!) sell pretty well.