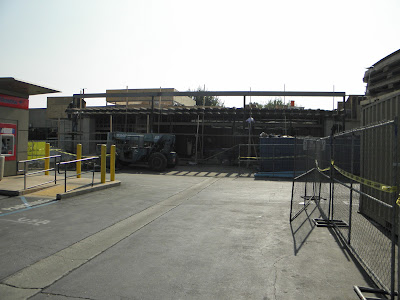 Construction on the Fresh & Easy Express store at Victory Boulevard and Buena Vista Street in Burbank, California, pictured above and below, is in full swing. The store is set for an early 2012 opening. The photos were taken by a Fresh & Easy Buzz correspondent on November 18, 2011. Note the "now hiring" banner in the photo below. [Photo credit: Fresh & Easy Buzz.] 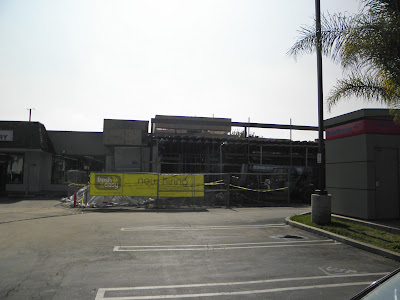 As we've previously reported, including most recently in our November 1, 2011 piece linked above, we've discovered an additional six Fresh & Easy Express stores Tesco and its Fresh & Easy chain plan to open next year, for a total of seven units thus far. All seven stores are in Southern California.

As a service to our readers, we've identified the specific locations of the additional six Fresh & Easy Express stores Tesco's Fresh & Easy currently plans to open.

Listed below are the addresses of all seven 'Express' units - the store opened November 2 and the six additional units planned thus far.

Tesco's Fresh & Easy has not publicly announced the specific locations of the six of the additional 'Express' stores to date. Therefore, we believe you're seeing all six locations for the first time here.

﻿Fresh & Easy Neighborhood Market is currently preparing three of the six yet-to-be-opened 'Express' format stores listed above - the Figuera Street and Jeffferson Boulevard store in Los Angeles; the Pacific Coast Highway and 8th Street unit in Hermosa Beach; and the Victory Boulevard and Buena Vista Street location in Burbank - for early 2012 openings, as we noted in this story on November 15.

In addition to the seven Fresh & Easy Express locations, the 184-store fresh food and grocery chain continues to look for additional sites in California where it might locate the micro-small-format stores, which are a scaled-down version of the 10,000 square-foot standard Fresh & Easy markets.

The Fresh & Easy Express stores offer all the product categories - dry grocery, perishables, produce, meat, beer and wine, fresh-prepared foods - that the standard version Fresh & Easy stores do, but in an edited version.

The 'Express' store opened on November 2 in Los Angeles also has an in-store bakery and self-service coffee bar, which are features Tesco's Fresh & Easy is adding to about 100 of its stores. According to our sources, plans are for all of the Fresh & Easy Express stores to include the bakeries and coffee bars.

However, Tim Mason, the CEO of Fresh & Easy Neighborhood Market and Tesco's group deputy CEO-chief marketing officer, said last year and again this year (see here and here) that Fresh & Easy could open as many as 70 new stores in the Los Angeles area over the next couple years.

Fresh & Easy has opened a handful of new stores in Los Angeles this year, with some planned there for next year. Many of the 70 potential units Mason is referring to would be Fresh & Easy Express stores, according to the information we have.

But for now its a total of seven Fresh & Easy Express stores that Tesco's Fresh & Easy plans to have open and operating in 2012.

Could you write a post explaining the strategy behind their locations, both normal and express?

1) Why so many locations new building construction when there's so much available empty retail space...sometimes in the very same strip mall they're building into.

2) Why are so many stores located directly across the street from an existing full-service grocer?

3) Why are some store locations laid out years in advance?

For 3, take this example in Fresno.
http://g.co/maps/yfxxs

Parking lot built (and painted) back in 2009, with no signs of the store ever being built as we enter 2012. Why spend money on the parking lot so far in advance? Why pay for the land?

Heres another Fresno example. After having the parking lot sit idle for years, a Fresh And Easy building was erected this summer...but according to this blog, no opening is planned in the near future.

Would you please drop us an email at freshneasybuzz@yahoo.com. Want to provide you with some information per your comment questions, along with asking you a question.

PS: Just mention in the email you are the Jass who left the comment. Thanks.