'Side by Side': Wine at Fresh & Easy Neighborhood Market Aids America's Wounded Warriors 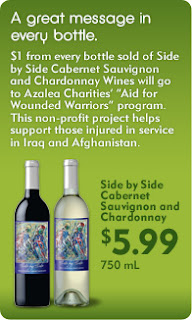 Fresh & Easy Neighborhood Market is offering something extra as part of the introduction of its new "Side by Side" brand Cabernet Sauvignon and Chardonnay wines this week.

For each bottle of wine sold, the grocer is donating $1 to Azalea Charities' "Aid For Wounded Warriors" program, which helps U.S. soldiers who've been wounded or injured in Afghanistan and Iraq.

The wine is being introduced in Tesco's 175 Fresh & Easy stores in California, Arizona and Nevada this week and is priced at $5.99 bottle, $1 of which goes to the fund to aid the wounded warriors.
The non-profit group assists soldiers who've been wounded or injured in Afghanistan and Iraq in variety of ways.

For example, the all-volunteer organization purchases specific items weekly for the wounded warriors, at the request of U.S. Military and Veterans Administration Medical Centers and Fisher House rehabilitation  facilities throughout the country. Many of the items bought are things not provided to the men and women as part of their military and veterans' medical care.
The Azalea Charities' project, which is based in Northern Virginia near the nation's capital, also provides financial support to the CrisisLink Program, which is a telephone hot line for the wounded warriors and their families.
You can learn more about Azalea Charities' "Aid for Wounded Warriors" program here. There's also a link at the page that can be used to make an online donation.
We're approaching Memorial Day weekend, which includes cookouts and picnics but is really about honoring those who've made the ultimate sacrifice for their county.

We honor their families as well on Memorial Day, along with all those still living who've served.

And among those who've served and are still living, as a people and country we owe more to them than we're currently giving, particularly those wounded warriors who seldom if ever complain - in fact many want to get back to Afghanistan or Iraq and rejoin the brothers and sisters they left there - and define the term the "American Spirit."

We invite those of you reading this to join us in making a donation this week to whatever organization helping wounded warriors or veterans you choose.

For example, along with Azalea Charities' wounded warrior assistance program, there's the "Wounded Warrior Project," which offers a myriad of programs and services to aid wounded warriors and their families, as you can learn about at the group's website here.

Most of us can afford to donate $10, $20 or more to programs helping those who've served and were wounded or injured doing so.

There's no better time to help than now, a few days before Memorial Day.

If you don't think you can afford a small donation, look at it this way - just spend $10 or so less at the grocery store (sorry grocers) while stocking up for your backyard cookouts and Memorial Day picnics this weekend. Then donate that $10 or so to one of the two wounded warrior assistance programs mentioned in this story, or to any other organization assisting active duty soldiers or veterans.

Take our word for it, in the grand scheme of things doing so will make you feel even better than having that extra beer or two, second hamburger or hot dog and extra serving of dessert this weekend will.

And with the money you saved buying (and eating) a little bit less at the grocery store for your weekend party, you'll have enough to donate whatever amount you can afford to help those Americans who should be on our minds and in our thoughts not only on Memorial Day but throughout the year.
Posted by Fresh & Easy Buzz at 6:27 AM

I saw your post and looked for the side by side wine in my local Fresh & Easy in Fresno last night but they did't have it.

Don't have it here in Pacifica either. F&E advertised it in their mailer here too earlier in the week.

Rancho Cucamonga doesn't have it and neither does San Dimas.

The Willow Glen Fresh & Easy in San Jose doesn't have the wine either.

Note: Over the weekend we called all the Fresh & Easy stores the readers mentioned in comments and none of the stores had the Side by Side wine.

We also had correspondents check 4 additional stores - 2 in Southern California, 1 in Arizona and 1 in Northern California - and none of those stores had the Side by Side wine on the shelf either.

It's a major customer service/logistics/distribution problem since the grocer advertised the wine in it "Friends of Fresh & Easy" mailer that went out last Tuesday.

Readers, are you seeing the Side by Side wine in any Fresh & Easy stores this week/currently?

I looked for the wine in the Lake Mead-Las Vegas store yesterday. None. The clerk said it wasn't shipped by the main office. Really poor taste promoting a donation to soldiers then not having the product.

The promotion, nor the wine, is in the Pacifica store. I checked yesterday. I did talk to one of the clerks about the missing Side by Side wine with the Wounded Warriors donation, and she said she would speak to the district manager.

Agree with you very much VegasDad. And over Memorial Day weekend too. :(

Still no wine at the store where I shop. Checked another Fresh & Easy store in Vegas since I was in the neighborhood last night and none there either. I left a message on Fresh & Easy blog and they haven't even published my comment let alone responded. I'm a wounded vet so it's probably more important to me than others. But Fresh & Easy just lost a good customer. Me.

We never got it at the FE store I work at a team leader at in Southern Cal. Going to check on it.

We're told by a good source that the Side by Side wine is being shipped to stores this week, starting yesterday.

Has anyone seen the wine in any of the stores this week?

We will be checking as soon as possible. But let us know if you've now seen it on store shelves.

I saw it last week, and bought a bottle. Went back for some more today as it was simply delectable, but there was none there today!!! Where has it all gone and where can I buy more??