Tesco's  Fresh & Easy Neighborhood Market is launching a "clip-strip" cross-merchandising program in its stores, featuring a selection of numerous packaged general merchandise items like kitchen gadgets, cookware, toys and other products, merchandised on plastic "clips" attached to grocery shelving strips throughout the aisles.

The general merchandise "clip-strip" program was launched in the first batch of Fresh & Easy stores a little over a week ago, and is being implemented in all of the grocer's 175 units in California, Nevada and Arizona.

ATA, which was founded in 1991 by Sumner Bennett and has distribution centers in Hayward, California and Nashville, Tennessee, is also a full-service "rack-jobber," meaning it offers merchandising services for its "clip-strip" programs, providing the labor to stock and replenish the general merchandise items for retailers. ATA is providing this service for Fresh & Easy Neighborhood Market.

As you can see in the photographs accompanying the story, the general merchandise items are cross-merchandised throughout the Fresh & Easy stores. In the stores we visited, the only sections without the "clip-stripped" products were the refrigerated/frozen food cases and fresh produce.

The philosophy and strategy behind "clip-strip" merchandising programs, which U.S. grocery stores have been using for many decades, is to create impulse sales by cross-merchandising related non-food and consumable items (as you can see in the photos) adjacent to compatible products on the shelves, in order to generate added impulse sales from shoppers. Cross-merchandising wine bottler openers next to wine and champagne (see the photo below), for example, frequently results in these types of impulse purchases by shoppers.

A number of grocers (some of Safeway's divisions, for example) also include higher-ring, higher-margin consumable items in their "clip-strip" programs, such as packaged sun dried tomatoes, dried mushrooms and gourmet dry-sauce mixes (near dry pasta), in order to achieve the same objective - impulse sales from shoppers.

All of the items we saw in the Fresh & Easy stores we visited were non-consumable, general merchandise products, however, which isn't uncommon, as numerous other grocers do the same.

Launching the "clip-strip" cross-merchandising program and using ATA to handle it is a good idea for Tesco's Fresh & Easy for a variety of reasons - although because of the limited and incremental nature of such programs it will result in minor overall added sales for the grocery chain.

First, Fresh & Easy needs to increase its customer average market basket size - the dollar amount of groceries a shopper buys during a visit to one of the stores. Therefore, any form of merchandising - and particularly a cross-merchandising-oriented effort like the "clip-strip" program that has the potential to add impulse purchases to customers' regular, planned item purchases - is a net positive for the grocery chain.

For example, suppose Jane A. Customer buys $20 dollars worth (planned purchase) of food and groceries at her local Fresh & Easy market. But while shopping in the store's aisles, she notices a wine opener, a plastic cat food can lid and a plastic "Pop Tart" container - all of which are currently available on "clip-strips" in the stores we visited - and tosses the three items in her shopping cart, which total, say, $7, bringing Jane's average market basket order for that particular shopping trip to $27, rather than the original $20 she planned to spend.

The result: An added $7 Jane might not have spent if the "clip-strip" program didn't exist at Fresh & Easy - as was the case until now - along with offering a potentially higher average market basket (purchase) for the store.

Additionally, "clip-strip" programs utilize available shelf space because the items are attached to the grocery shelf strips, thereby adding incremental sales without any additional cost to the retailer of added shelving or fixtures.

If the items sell well in a store, they also add to the store's average sales-per-square-foot metric, since the "clip-stripped" items are offered within a store's existing walls. 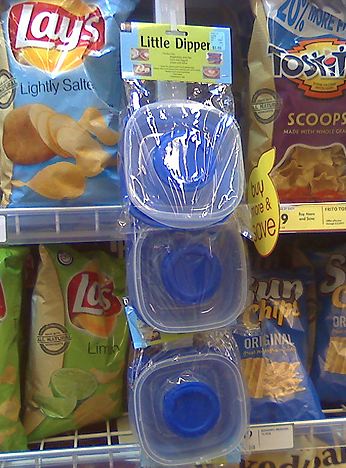 The "clip-stripped" general merchandise items, which are rotated periodically, are also almost always offered on a "guaranteed sale" basis by ATA and other distributors. In other words, if certain items don't sell over a given period of time, they're either traded out by the distributor for different items of equal dollar value or credited on the invoice to the grocer by the distributor.

Further, when grocers select to take the full-service merchandising service offered by ATA and other "rack jobbers," for "clip-strip" programs, that means the distributor sends merchandisers into the stores to stock and replenish the general merchandise items on a regular basis, which means no labor cost for the grocer. ATA is providing this service-level to Tesco's Fresh & Easy.

Lastly, the programs also offer advantageous seasonal opportunities for grocers. For example, in the summer months, items related to outdoor activities - picnics, cookouts - can be featured on the shelf strips next to related food and grocery items like condiments, beverages, hot dog and hamburger buns and others. Doing this takes advantage of seasonality to spur impulse sales.

The "clip-strip" item selection can also be partially geared to neighborhood demographics. For example, if a grocer desires to, it can have ethnic-oriented general merchandise items included in the overall merchandise  mix, say for its stores in neighborhoods with high Latino or Asian populations. Chopsticks are a good example, as are tortilla warmers.

And let's not forget the toys - a selection of which are almost always included in grocery store "clip-strip" programs, including the one being launched at Tesco's Fresh & Easy - frequently to the displeasure of mothers and fathers who take the kids grocery shopping.

Toys, largely because of those little customers sitting in the shopping cart child-seats, often are among the best-selling general merchandise products offered in "clip-strip" programs, regardless of where the items are placed on the shelf strips in stores.

But placing toys in, for example, the breakfast cereal aisle, and clipped on the shelf strip eye-level to a child sitting in a shopping cart seat, generally is a good bet if a grocer wants to generate some solid impulse sales. 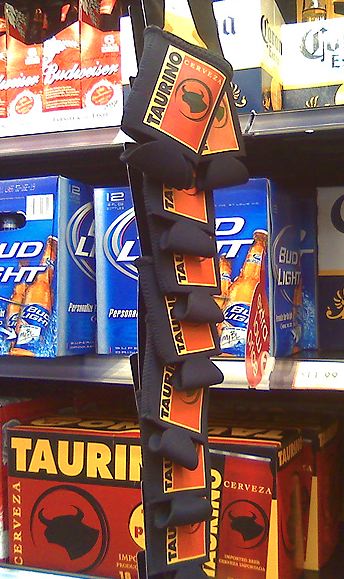 According to our sources at Fresh & Easy Neighborhood Market, most of the 175 stores should have the "clip-strip" programs in place by the end of this week.

Additionally, new Fresh & Easy stores will include the cross-merchandised. "clip-strip" program and items in the stores when they open.

But it and similar merchandising programs - along with making some major changes at Fresh & Easy - are essential for Tesco if it wants to come close to breaking even with its U.S. fresh food and grocery chain by the end of its 2013 fiscal year (just 23 months away), as CEO Philip Clarke says it will do.
Posted by Fresh & Easy Buzz at 7:47 PM

Clip strip's huh?.... It's amazing that the company that wanted to transform the way the American people shopped for food, adopts more and more things that traditional safeway, kroger, and supervalu stores do to increase profits.....

Guess there is no point in re-inventing the wheel on successful merchandising tactics.

It only took Fresh & Easy 3.5 years to figure out clip-strip programs help sell merchandise. That's what I find interesting.