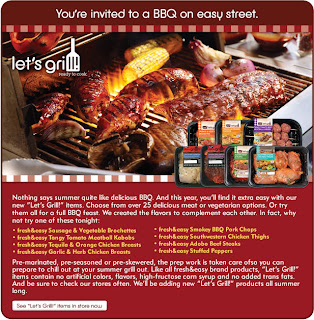 Tesco's Fresh & Easy Neighborhood Market is launching 26 new marinated and ready-to-grill beef, pork, poultry and vegetarian items under the fresh&easy "Let's Grill" brand in its 175 stores in California, Nevada and Arizona in advance of the upcoming summer grilling season.

The new "grill-pack" items, which contain no artificial colors, flavors, high-fructose corn syrup or added trans fats (some have preservatives though) are an expansion of an existing line of "grill-pack" meat items Fresh & Easy offers in its stores.

The retail price-points for the new "grill-pack" items noted above range from a low of $3.99 - Pollo Asado - and $4.99 - Stuffed Red Bell Peppers - to $8.99 for the Peppered Beef Fillet Tips.  A number of the items are being offered at a mix and match price of 2/$5.49, based on purchasing a minimum of two SKUs.

You can view all 26 of the new "fresh&easy "Let's Grill" items, along with the retail prices, here.

As part of the introduction of the 26 new "grill-pack" items, Fresh & Easy Neighborhood Market said today Neil Strawder, who's known around grilling circles in Southern California as "Bigmista," will be going on the road to various stores again this year, as he did in 2010, offering summer grilling tips - and free BBQ - to Fresh & Easy customers.

Fresh & Easy hasn't announced which stores the grill-master will be visiting first or when his road show will begin. But, according to our sources, the first store barbeque will be in early June, with a series of other store cookouts happening throughout the month and into July and August. At the events held outside the stores, Fresh & Easy serves free barbeque and side-dishes to all who attend.

"Bigmista" recently competed in "The Ultimate BBQ Showdown." The event is being broadcast on CBS May 28th (Memorial Day weekend).

Strawder, who's sworn to secrecy about who won, competed against fellow grill masters Myron Mixon, Tuffy Stone and Bubba Latimer - great names all. The winner receives the "Kingsford Cup" (as in the charcoal briquet brand from consumer products-maker and marketer Clorox Co.) and a cash prize - along with bragging rights, of course.

In our June 7 and July 9, 2010 stories we complimented Tesco's Fresh & Easy for coming up with the "Bigmista" road show. However, we offered what we felt was a well-deserved critique of the grocery chain's marketing head and department for not promoting the events in any significant way, which they didn't.
﻿
﻿﻿﻿﻿﻿﻿Our critique included noting here that Fresh & Easy missed a perfect opportunity to tie-in the grill-pack items it was promoting at the time and Strawder's store road show with a promotion the grocery chain was doing with the Los Angeles Dodgers. Read about that promotion here - June 3, 2010: Fresh & Easy Neighborhood Market Teams Up With The Los Angeles Dodgers in 'Game & Grill Sweepstakes' Promo.

Fresh & Easy tied-in the launch of the 26 new grill-pack items with "Bigmista's" road show in the press release it issued today though, something it didn't do last year, which shows it's learning, as well as perhaps reading Fresh  & Easy Buzz closely.
﻿
﻿The ready-to-grill vegetarian items are a new addition to the grill-packs for Tesco's Fresh & Easy, having focused on beef, pork and poultry previously.

Speaking of our 2010 stories, we suggested in this one on June 7 that adding some vegetarian options to its "grill-pack" line would be a good idea for the grocer to do.

Here's what we said in the last paragraph of our June 7, 2010 piece: "Meanwhile, who doesn't love free barbecue? The answer: Hardly anyone - although vegans might like some grilled veggies to be available. Therefore, we suggest 'Bigmista' stock up for his road show next week, and get a little rest before it starts."

Fresh & Easy has done just that - adding vegetarian options to its "grill-pack" line less than a year later.

The 175-store fresh food and grocery chain has also launched six different salad kits, which you can see here, to tie-in with the ready-to-grill items.

Fresh & Easy Neighborhood Market is planning to introduce additional items to the "Let's Grill" line this summer, according to our sources. The first new SKUs should hit the stores in June, our sources tell us, followed by a few more in the July-August period.

The already-marinated, ready-to-grill meats and veggies, which can be prepare either on an outdoor grill, grill pan on the stove, or in one of the ubiquitous electric grills (George Foreman anyone?) found in nearly every kitchen in America, are part of a trend we call "ready to cook," which means everything is done for the consumer, all he or she has to do is grill it, fry it, or pop it in the oven.

"Ready-to-cook" differs from "ready-to-heat" because in the latter case all a person has to do is warm the food product - entree, side-dish - up in a microwave or conventional oven. In contrast, with "ready-to-cook," consumers have to put in slightly more effort, such as making sure they don't over or under cook the meat, poultry or vegetable items.

U.S. grocers and butcher shops have been adding value to meat items for over 30-years,

And from a merchandising and margin perspective, that's exactly what Tesco's Fresh & Easy (and all grocers) is aiming for by offering the value-added meat, poultry and veggie items.

Fresh & Easy can sell the marinated steaks, chicken, pork and veggies for a much higher price, without a huge expense because the marinades and seasonings don't cost much, than it does the same items in their natural state. The desired result: A higher gross margin on the items, which Tesco hopes, along with other efforts it's making, will help lift its operating margin for Fresh & Easy Neighborhood Market from its current negative-38% to at least plus-1% as soon as possible.

To put Fresh & Easy's negative-38% margin in perspective, it's difficult t find a U.S. grocery chain or independent that's profitable without a margin that's a least a positive-20%.

And Whole Foods Market, which Tesco's Fresh & Easy positions itself against with the marketing tag-line - "wholesome food that doesn't cost your whole paycheck" - currently has a positive-36% margin, the highest among all U.S. grocery chains.

Fresh & Easy has fun with the Whole Foods "Whole Paycheck" ad slogan - a nickname people are using for the super-successful natural grocery chain much less these days since it's improved its pricing structure and value proposition over the last two years. But we suspect if Whole Foods Market co-founder and co-CEO John Mackey offered to arm wrestle (and he's done stranger things) Fresh & Easy's CEO, Tim Mason - winner gets the other chain's margin - Mason might be tempted to take Mackey up on the proposition.

But grilling and not arm wrestling season is upon us so, to quote "Bigmista" from one of his Fresh & Easy store road show events last year - "Let's Grill."