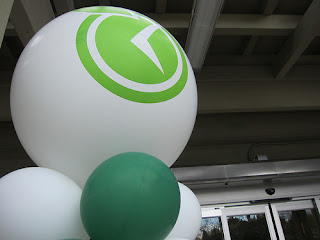 Until last year the shopping center was without a grocery store anchor. There are now two - a 99 Ranch Market supermarket that opened in the center last year and the Fresh & Easy store, which opened this morning at 10 a.m..

We reported in an April 2009 story - April 19, 2009: Tesco's Fresh & Easy Signs Lease For New Store in Pleasanton, CA; We Reported 15 Months Ago the SF Bay Area City Was in its Strategic Sites - that Fresh & Easy had signed a lease for the Pleasanton location. However, Fresh & Easy Neighborhood Market didn't publicly announce its plans to open a store at the location until last summer, when it announced it would open 11 stores in early 2011 in Northern California.

We first identified Pleasanton as a city where Tesco's Fresh & Easy would open a store in this January 24, 2008 story:  Fresh & Easy Locking-Up Leases For Northern California Invasion.

Tim Mason, the CEO of United Kingdom-based Tesco's Fresh & Easy Neighborhood Market, which is headquartered in the Southern California city of El Segundo, attended the Pleasanton store opening today. Mason, who's based in Southern California, is also Tesco's deputy CEO, a position in which he reports to the global retailer's CEO, Philip Clarke, as his deputy.

Mason wasn't the only grocer wearing a suit and tie at the Pleasanton store opening today. A Fresh & Easy Buzz correspondent spotted two Safeway corporate employees at the store today. One even had a Safeway Stores, Inc. plastic name card attached to his belt. Safeway's corporate headquarters office complex is just a short drive from the Fresh & Easy market in the Rose Pavilion Shopping Center.

In addition to the 99 Ranch Market store in the shopping center and the Safeway supermarket not far away, there's also a Trader Joe's store just down the street from the new Fresh & Easy market at Santa Rita Road and Rosewood Drive.

Fresh & Easy Neighborhood Market is set to open three more stores in Northern California this month, on April 27. Those stores are at the following locations in the following cities: Hayward (Mission Blvd. & Rousseau St.), Napa (Imola Ave. & Jefferson St.) and San Jose, at Saratoga and Payne. All three cities are in the San Francico Bay Area.

Additionally, the Tesco-owned fresh food and grocery chain, which now operates 173 stores in California (124 units), southern Nevada (21 units) and metropolitan Phoenix, Arizona (28 units), will soon announce the opening dates of at least four more fresh food and grocery markets in Northern California. Those stores are in San Francisco (at 32nd Street and Clement; and 5800 Third Street at Carroll Avenue), Antioch and Fairfield, as we've reported here and here.

Fresh & Easy has opened 18 stores so far this year - 10 units in Southern California and eight stores in the north.

The grocer hasn't opened any new stores in Nevada or Arizona so far this year, and has no openings planned for April in either state. In November 2010 Fresh & Easy closed six underperforming stores in metro Las Vegas, Nevada and six similar units in metro Phoenix, Arizona.

Below are the locations (and dates opened) of the eight stores Fresh & Easy has opened in Northern California so far this year: