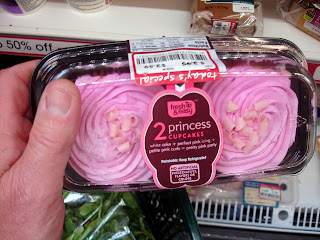 Fresh & Easy Neighborhood Market, which is owned by United Kingdom-based Tesco, celebrated its British pedigree and heritage today by featuring "fresh&easy princess cupcakes" in its 175 fresh food and grocery stores in California, Nevada and Arizona, in honor of the wedding of Prince William and Kate Middleton, who are now officially know as the Duke and Duchess of Cambridge.

The Fresh & Easy stores we visited today, as well as others in the chain, were displaying the cupcakes - which are white cake, with pink icing and pink curls, and contain no artificial colorings or flavors - prominently.

Fresh & Easy Neighborhood Market has sold the pink "princess cupcakes" in its stores since 2008. It's a product ready-made to merchandise and promote for today's big event, if ever there was such a product.

Some customers we observed and talked to in the stores today thought the "fresh&easy princess cupcakes" were created by the grocer specifically for Kate and William's wedding today. They were surprised when told by store employees that not only are they available year-round in the Fresh & Easy stores but have been for quite some time.

Therefore, not only was it a good idea for Tesco's Fresh & Easy to promote the "princess cupcakes" today, in order to have some fun, create a little in-store excitement and grab some impulse sales, it also, at least where we observed it, served to introduce a number of shoppers to a ready-to-eat sweet treat they weren't previously aware was available at the grocery chain.

Additionally, knowing the pink cupcakes are always available in the stores might just bring some of those shoppers back to Fresh & Easy to buy them for their own special - and not so special - occasions, particularly if there's a "princess" or two - or even a budding Kate Middleton - living in the house. After all, part of being a princess is getting what you want, when you want it. 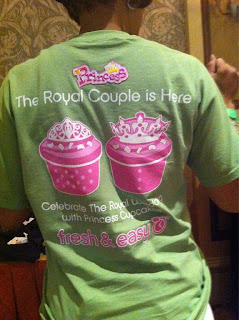 Fresh & Easy store workers also served as human billboards for the "fresh&easy princess cupcake" promotion today, wearing shirts like the one pictured above.

The message on the shirts: "The Royal Couple is Here;" featuring a picture of two "princess cupcakes" below it, is eye-catching and, as we observed more than once today, led a number of shoppers to ask: "Where are the princess cupcakes?"

The human billboards therefore served a positive merchandising purpose, along with creating some fun and excitement in-store around the Royal Wedding.
Posted by Fresh & Easy Buzz at 8:17 PM

I am having a hard time reaching anyone in F&E headquarters about a problem at the stores on Sunrise in Palm Springs, California. The manager at the store won't even tell me the name of the District Manager. And to top it off, I'm a Tesco shareholder. You call HQ and get transfer and then the line cuts off.