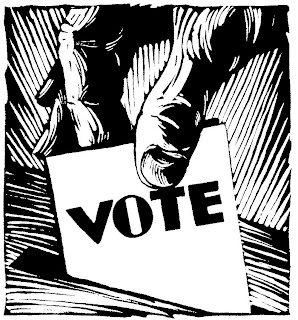 Seven Southern California-based UFCW union locals, which represent about 62,000 unionized grocery store workers in a region stretching from coastal and inland Southern California to the Mexican border, and including the southern Central Valley, held a strike authorization vote yesterday, the result of which will be announced by the locals later today.

The three year contract between union grocery store workers and unionized grocers in Southern California expired on March 6. The workers, the UFCW union and the grocers have been working on a day-to-day basis since then.

The three supermarket chains also happen to be the three market share-leading food and grocery retailers in Southern California. Normally Stater Bros., which is the fourth-largest grocer in the region based on market share, would also be a party in the talks. But this time around Stater Bros. decided to negotiate separately with the UFCW because of the struggles it having in the market, as well as because as a locally-based regional chain it says it has unique needs and interests, compared to the three national grocery chains, which is true.

Gelsons, a small Southern California upscale grocery chain, is also negotiating on its own with the union.

In the past, the region's top four chains negotiated together with the UFCW on a new contract. Once an agreement was reached, nearly all of the smaller unionized chains in Southern California, such as Gelsons, would then adopt the contract agreed upon by the big chains and the union.

Most of the smaller chains will likely do the same this year, as only Gelsons (and Stater Bros, which is a medium-size chain with about $3 billion in annual sales), which has under a billion dollars in annual revenue, is negotiating on its own with the union.

In order for yesterday's vote to result in an authorization to strike, a two-thirds majority of the UFCW-member grocery clerks voting have to vote in the affirmative.

However, a two-thirds majority vote in favor of a strike against Ralphs, Vons and Albertsons doesn't mean a strike will happen soon - or ever. Instead, the union and its members can call for a walkout at anytime - and the UFCW officials wield considerable power regarding if a strike against the three chains occurs, and if it does, when it occurs - once the members authorize it.

We will know how they voted later today when the results are posted by the union locals.

Here's our analysis of what the results of the strike authorization vote to be announced later today will be, based on conversations we've had with UFCW members and union officials in Southern California, along with a summary of what we predict will happen based on those results, should we be correct about the outcome of yesterday's vote.

First, based on our reporting, it's our analysis the UFCW members will vote by an at least two-thirds majority, if not slightly higher, to authorize a walkout against Ralphs, Vons and Albertsons.

However, we predict the presidents of the seven Southern California UFCW union locals will not call for an immediate strike against the three chains, despite the member vote to authorize the walkout.

Instead, the UFCW officials negotiating with representatives of Ralphs, Vons and Albertsons will use the threat of a walkout as a negotiating tool with the chains. Leverage.

Additionally, most of the UFCW member grocery clerks we've talked with since last week, when the strike authorization vote was announced, told us they can't afford to live on the small stipend they would receive if they were to go out on strike, particularly in the current poor economy, where everyday basics like the cost of food and gasoline are going up each week.

The UFCW locals are cognizant of this reality. In fact, one Southern California UFCW official told us, based on remaining anonymous, that if yesterday's vote results in the strike authorization, the union will not call for a walkout anytime soon but instead will use the possibility of an employee walkout as part of its negotiating tool box with the representatives of the "big three" grocery chains.

Officials at the seven Southern California-based union locals believe Ralphs, Vons and Safeway are dragging their collective heels in terms of moving the negotiations along.

In turn, all three chains have said in statements last week and this week they believe the union officials have acted prematurely in calling for yesterday's strike vote.

Such are the things labor negotiations are made of.

The last contract negotiations (for the contract agreement that expired March 6) took about seven months before an agreement was reached by the union and the chains. That contract was ratified in a vote by the UFCW local members in 2007. The contracts run for three years.

At the end of March, about three weeks after the expiration of the contract, the three chains sent a list of their key negotiating items, including desired take-backs, to the UFCW locals. Therefore, the negotiations have only been going on in a real sense for a little over two weeks.

The negotiations currently center on employee health benefits and pension issues. For example, the chains want employees to contribute more money out-of-pocket for their health benefit plans. The union objects to the proposed increase, saying many part-time employees already can't afford the contribution amounts and therefore are not participating in the employer-union health plan.

The three chains also want some reductions in the various types and amounts of hourly premium pay paid to the workers.

For example, union store clerks get extra hourly pay when they work on Sundays, after certain hours in the evening and on certain holidays. The chains say they need to get the premium pay rates better under control because the added labor costs are, among other things, making them less competitive against the growing number of major non-union grocers in Southern California, who don't generally offer premium pay.

Among these non-union chains are: Walmart, Target, Trader Joe's, Whole Foods Market, Sprouts Farmers Market and Tesco's Fresh & Easy Neighborhood Market. Each of these grocers has and are opening numerous new stores in Southern California, and in the process they've collectively been taking sales and market share away from the big three unionized supermarket chains, along with Stater Bros. and some of the smaller unionized chains.

We will report on the results of the strike authorization vote later today, along with offering some analysis about what the results could mean for Ralphs, Vons and Albertsons - and for the non-union grocers mentioned above.
Posted by Fresh & Easy Buzz at 12:04 AM