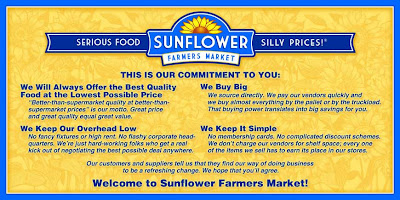 The makeover began with a recently debuted new logo (at top), is now followed by the new website launched today, and will soon be seen in the form of redesigned labels on all the private brand products offered in the 33 Sunflower Farmers Market stores in Colorado, Arizona, New Mexico, Nevada and Utah, a process vice president of marketing and IT Steve Black says the grocer has about 50% completed.

The refreshed and redesigned Sunflower website offers a number of new or expanded features, including: added nutritional information, meal ideas, recipes and coupons; additional information about the grocer's offerings and activities; and a special focus section for Sunflower's "Silly Savings Club."

And in two weeks, the Sunflower Farmers Market brand and banner will fly for the very first time in the Golden State, when the Colorado-based grocer, which also has corporate offices in Arizona, opens its first store in the Northern California city of Roseville, near Sacramento, on Wednesday, May 11.

The opening of the flagship store in Roseville - and Sunflower Farmers Market is brewing up a big grand opening for May 11 - will be followed by the opening in October 2011 of a second Sunflower market in Northern California - in Modesto. Modesto is in the Northern Central Valley, about a two hour drive from Roseville.

The Modesto Sunflower Farmers Market store will be in the city's popular and busy McHenry Village shopping center, at McHenry Avenue and Briggsmore Avenue, located in a vacant building currently undergoing renovation by the grocery chain.

We first reported, as part of our April-through-December 2010 Northern California Special Report, that Sunflower Farmers Market was planning to open a store in Modesto. The retailer confirmed our story earlier his year, which we reported in a piece on March 24, 2011: Sunflower Farmers Market is Headed to Modesto as Part of Northern California Push.

The 28,000 square-foot Sunflower Farmers Market store will be the anchor grocery market in the busy shopping center.

The building became available as the result of its most-recent tenant's (Philips Lighting and Home) decision to move from it to a smaller building in the shopping center, which it did this month. But it has a multi-decade history of housing grocery stores.

Prior to the lighting and home retailer moving into the building in 2002, it housed a New Deal supermarket, which closed in 2002. Prior the the New Deal store, a Lucky Supermarket operated in the building for many years.

The New Deal supermarket in McHenry Village was part of what at its peak was a chain - New Deal Markets - of about 18-stores, owned at the time by Canada-based Provigo's Market Wholesale Grocery Company, a then-major wholesale grocer in Northern California.

New Deal Markets was founded in 1933 in Modesto by Walter and Charles Heckendorf. The brothers named the chain after President Franklin Roosevelt's depression-era "New Deal" economic assistance and social reform program. The Hekendorf  family owned and operated New Deal Markets, which had stores in Modesto and a number of surrounding cities, for over five decades.

Canada's Provigo acquired New Deal Markets in the 1990's, shortly after it bought Market Wholesale Grocery Company, which at the time was one of the leading wholesale grocers in Northern California.

New Deal, along with the family-owned Petrini's chain in the San Francisco Bay Area, which Provigo also bought in the 1990's, were at the time Market Wholesale's top two customers, accounting for over half its sales. Provigo's Market Wholesale had "right of first purchase" options with both New Deal Markets and Petrini's, which it exercised when the owners of the chains decided to retire and sell.

Market Wholesale sold and closed what were the 19 Petrini's stores in the Bay Area, after completely changing what was once, under the Petrini's multi-decade ownership, a very successful upscale supermarket chain, with a specialty food and grocery-oriented focus.

In the 1990's, Provigo hired Trader Joe's founder Joe Coulombe, who had by then sold TJ's, to turn the Petrini's stores into a cloned version of the Trader Joe's format, which included cutting all the gondola shelving down to about four-feet high, along with offering a very limited assortment of mostly specialty, natural and organic food and grocery products in the stores.

The format flopped. Provigo then sold off as many of the Petrini's stores as it could, and closed the rest. "Trader Joe's II" was far from a successful second act for Coulombe.

Provigo ended up selling some of the New Deal stores and closed others. It then sold off what it could of the remaining assets.

It also sold the assets of Market Wholesale to United Grocers (UG), a cooperative wholesaler in the Pacific Northwest which at the time had a facility in Medford, Oregon near the border with Northern California. UG later merged with Southern California-based Unified Grocers.

New Deal Markets, Petrini's and Market Wholesale, all once-significant players and names in the grocery business in Northern California, no longer exist.

Interestingly, Tesco's Fresh & Easy stores in California, Nevada and Arizona  look very much like the Petrini's stores did after Joe Coulombe took over and changed the interior design to a bare bones, utilitarian look. The limited assortment product mix and merchandising model and style of the Fresh & Easy Neighborhood Market stores is also very similar to what the Trader Joe's founder did in the 1990's with the once full-service Petrini's supermarkets.

As we've reported since last year, Sunflower Farmers Market has been and is looking for numerous future store locations in Northern California. For example, according to our sources, the grocer is close to closing on a location in San Jose and another in nearby Mountain View. Both cities are in the famed Silicon Valley, in the Bay Area. Were told no deals have been signed yet though.

The grocer is also looking at additional locations throughout Northern California, from the Sacramento region and the Bay Area, to the valley and the coast.

When Sunflower Farmers Market opens the doors of its first farmers market-style food and grocery store in California, at 7 a.m. on May 11 in Roseville, its planning a number of special events to mark the day and kick off its arrival in the Golden State.

Among the grand opening events planned for May 11 include: Free food and drink samples offered at a variety of booths set up by Sunflower's vendors and suppliers; prize drawings and giveaways in the store throughout the day; and scores of grand opening specials. In addition, the first 50 shoppers at the opening will receive Sunflower Farmers Market reusable shopping bags filled with $50 worth of free groceries.

Roseville has become a popular location for farmers market-style grocers. Sprouts Farmers Market, which now includes Henry's Farmers Market, having finalized it acquisition-merger of the competing chain on April 18, opened it second store in Northern California earlier this month -- in Roseville.

We broke the news on January 5, 2011 that representatives of Sprouts and Henry's Farmers Market were in talks to potentially do an acquisition-merger deal.

We also reported exclusively, before the two parties announced it, that such a deal would be done, along with reporting again exclusively on April 14 that the acquisition-merger would be final on April 18. On April 18 Sprouts Farmers Market announced just that. [Read our full January-to-April 2011 coverage of the Sprouts-Henry's deal and related issues here.]

In addition to California, Sunflower Farmers Market is entering another new state and market region this year. On April 18 the grocery chain announced it will open its first store in Oklahoma. The store will be at Northwest 63rd Street and North May Avenue in Oklahoma City. The 28,00 square-foot store is will open in September, according to Chris Sherrell, Sunflower's CEO. Sunflower operates stores in next door Texas.

As we've previously reported, Sunflower Farmers Market also has longer-range plans to open stores in Southern California. However, at present the farmers market-style grocery chain is focusing on the northern portion of the Golden State, starting with the Roseville store set to open May 11.

January 10, 2011: Sprouts Farmers Market to Open Second Northern California Store in Roseville No Later Than Mid-April
Posted by Fresh & Easy Buzz at 10:03 AM