New Report: How and Where Americans Spend Their Food & Grocery Dollars 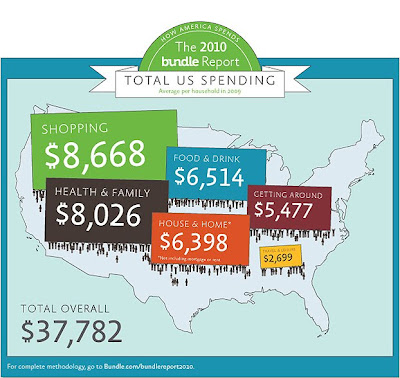 The consumer and money website Bundle.com, which is backed by Microsoft, financial services company Citi and the investment firm Morningstar, has produced what it calls its first-ever Bundle Report, which is titled: "The 2010 Bundle Report: How America Spends." The comprehensive report uses data obtained from Citi, the U.S. Federal Government and third-party sources, to arrive at an analysis of how much money, excluding housing costs, the average American household spent in 2009.

As the numbers depicted in the infographic here show, the average American household spent $37,782 in 2009, not counting mortgage or rent (which are not included in the Bundle data).

How, where Americans spend their food & grocery dollars

Most interesting to Fresh & Easy Buzz - as well as the most useful aspect of the report for grocers and food marketers - is the analysis the Bundle.com researchers did in the food and drink category.

First, using their data, the researchers looked at the demographics of U.S. food and grocery spending overall, breaking down the percentage spent on groceries (at all food and grocery retailing classes of trade) and at restaurants (of all types and formats). The results of their analysis is depicted in the infographic here.

As you can see in the graphic, Bundle.com determined the average American family spent $3,778 in 2009 on food and groceries at retail stores, while spending $2,736 dining out. [There are additional details and links here.]

Second, the Bundle.com researchers examined consumer spending in major U.S. cities when it comes to groceries and restaurants, developing a top ranking by city.

As the infographic here shows, Austin, Texas is the number one food and drink spending city, while Detroit, Michigan is dead last. Note the stark differences between number one Austin - $12,447 total ($6,146 annually on food-groceries at retail and $6,301 dining out)compared to $2,246 total ($1,375 at retail annually and $871 dining out) for last place Detroit.

The Bundle.com researchers point out five interesting aspects of their food-grocery-drink ranking by city:

• Austin, TX, residents spend almost twice ($6,301) the US annual average for dining out.
• In fact, five average Detroit households (the nation’s lowest spenders) can eat on one Austinite’s food budget.
• If Manhattan were its own city, it would be No. 1 for food spending ($13,079) and No. 1 for share of food budget spent on restaurants (59%).
• In Atlanta, dining out accounts for 57% percent of the city’s average total food and drink spending annually, the highest in the US and 28% higher than the US average.
• Denver residents allocate 22 percent of their daily spending to food, more than any other big city in the country.

It's important to note though, and the researchers do so, that like the rest of the study the city ranking data doesn't include what the average American family spends on either a mortgage or rent. We suspect this fact accounts for why New York City, San Francisco and Los Angeles, for example - all places with high housing costs and rents but big food spending cities according to other data sources - aren't higher-up in the ranking. But despite this variable - the intentional omission by the researchers of the housing cost data - the study remains not only interesting but useful.

In terms of Tesco's Fresh & Easy Neighborhood Market, just one of the grocer's current 159 fresh food and grocery stores is located in the top 15 cities ranked in the Bundle.com study. That store is in Scottsdale, Arizona, which is ranked number nine.

A final word: Like all such studies, this one should be used in conjunction with other food and grocery consumer purchase research and data. The reason for this is because no one study is precise. Using multiple data sources allows for a check and balance system, along with arriving at a more precise snapshot of consumer food and grocer purchase data and demographics. Having said that, in our analysis and opinion, Bundle.com's comprehensive study is a valuable tool for retailers, marketers and consumers.

Make sure in using the study you pay attention to the numerous links at the pages here, here and here. At these links are numerous other features Bundle.com provides regarding its study and data, as well as download links for the infographics presented.

The researchers describe in depth the methodology they used in the study here. We compliment the Bundle.com researchers on their work.
Posted by Fresh & Easy Buzz at 3:44 PM