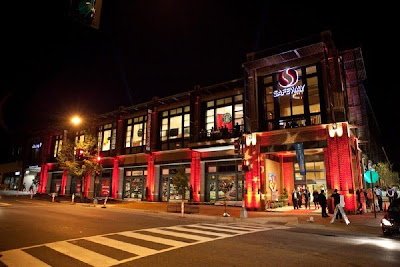 The expanded and remodeled 71,000 square-foot Georgetown Social Safeway on Wednesday night, all decked out for the VIP gala opening. Double-click on the photo to enlarge it. [Photo Credit: Chris Svetlik, Washingtonian.com.]

Perhaps only in tony Georgetown in Washington DC, the neighborhood where President John F. Kennedy lived in the late 1950's while serving as a U.S. Senator and where he kept his beloved townhouse even after being elected President a few years later and moving into the White House, would women get decked out in expensive designer gowns and stiletto heels and men put on suits and ties for the grand opening of a supermarket.

But Georgetown's Social Safeway, which will now be open seven days a week, 24 hours a day, isn't a mere supermarket. It's a Georgetown, and District-wide, institution. Therefore, holding a "gala in a grocery store" only seems fitting.

The store has been called the Social Safeway since the 1970's because it's a place where single Washingtonians are known to pick up one another, along with a steak, bottle of wine and a bunch of arugula. The residential blocks of Georgetown are filled with couples who met at the Social Safeway.

It's also a store where it's not uncommon to spot a famous, or infamous, Senator pondering the ripeness of the bananas or melons in the produce department (hint: Senator and former 2004 Democratic nominee for President John Kerry lives in Georgetown), or to see a onetime political power broker, now retired, pushing a shopping cart filled with steaks, ice cream, cookies, ready meals - and lots of bottles of wine and spirits.

The Social Safeway is back. And, after having the Safeway store closed for a year for expansion and a complete remodeling, the movers and shakers of Georgetown were ready to welcome back their new, bigger (71,000 square-feet), more upscale and greener "neighborhood" grocery store in a big way on Wednesday night.

On Wednesday evening (May 5), the night before the Social Safeway's grand reopening yesterday (May 6), the grocery chain threw an invitation-only VIP gala opening party rivaling events and receptions held at the White House or the State Department. There was a jazz orchestra, 10 wine and champagne bars, a Belvedere vodka fountain and brie cheese flown in from Paris, and enough types and varieties of foods and desserts to make even Martha Stewart happy. Not impressed yet? Well, there was a red carpet literally rolled out in front of the store for entering guests, and valet parking was available for those who drove. And we don't want to forget the fancy Safeway-logo ice sculptures, noted by the Washingtonian blog. You can see a photograph of one of the ice sculptures here.

The 650 guests - a who's who of Washington DC's political, lobbying, media, business and social circles - mingled, talked politics and more, just like they would do at a fancy Georgetown cocktail party thrown by social maven and Washington Post society writer and religion columnist Sally Quinn, who lives in the neighborhood. But rather than standing next to one of the impressive works of art at the home of Ms. Quinn and her husband, former Washington Post executive editor and current vice president-at-large, Ben Bradlee - who was best friends with the late President Kennedy - the well dressed men and women did their socializing at the Social Safeway in the produce department, near the in-store sushi and nut bars, next to a display of eggs, and in the store's uber-upscale 'Signature Cafe,' which features flat screen televisions, couches and tables, free WiFi, and an open hearth fireplace, along with fresh, prepared foods of every kind.

We wrote about the Georgetown Social Safeway in this piece - The Branded 'Signature Cafe' in Safeway Stores' Soon to Open 'Social Safeway' in Washington D.C. Should Turn A Few Heads - on April 8, 2010, from the perspective of how the store is Safeway Stores' most ambitious fresh, prepared foods merchandising effort to date.

However, since we do business and merchandising angles better than we do social event stories, although the two are usually linked in real life, we're going to turn the rest of the page (except our concluding paragraph) over to the Washington Post's talented social scene writer Lisa Rein, who attended Wednesday night's VIP gala opening at the greatly expanded and upscaled Social Safeway in Washington DC's Georgetown neighborhood.

>At the link at the end of this sentence you'll find Ms. Rein's story from the Washington Post, "With a VIP gala opening, Georgetown's Social Safeway is back on the market," which details all of the action at Wednesday night's Social Safeway gala opening party. Click here to read the article.

>And since no proper grocery store grand opening gala coverage is complete without pictures, here's a photo gallery-slideshow from the Washington Post of the Wednesday night bash. By the way, you won't find any humans dressed as cartoon characters giving out candy, a staple of supermarket grand openings, in these pictures. [Note: the fellow in the first photo in the gallery - the one wearing glasses, dressed in the dark suit with blue tie, and raising his glass of wine - is Safeway Stores, Inc. CEO Steve Burd. The women in the peach suit next to him, the one drinking champagne instead of wine, is civil rights leader and Washington D.C. Delegate to Congress Eleanor Holmes-Norton. Since District of Columbia doesn't get a Member of Congress like the states' do, she's called a Delegate. She also doesn't get to vote on Congressional bills, like the Members of Congress do. Other than that, she's a member of the club. Can you name any of the others pictured in the photograph?]

>Lastly, since words and pictures don't always tell the complete story, we include this video news report, which offers the sounds of Wednesday night's Georgetown Social Safeway gala opening. Additionally, these two video news reports are done in the store on its grand opening day, Thursday. They feature many of the in-store departments like produce, the Signature Cafe and the nut bar. The video reports are from DC's Fox 5 Television.

In case you're wondering why Safeway Stores' would spend so much money creating a super-upscale, 71,000 square-foot supermarket in Georgetown, at a time when so many American consumers (and most of the everyday residents of DC) are trading down and doing their grocery shopping at discount grocers like Walmart, Aldi, Sav-A-Lot and even dollar format stores, let us remind you - this is Georgetown in Washington DC, where recession or not, if you live in the neighborhood, you're likely to be either a Senator, Washington Lawyer, highly paid lobbyist, business executive, media star, or foreign diplomat. Or if not, are living way beyond your means. And, in many cases, you're also likely to have some connection to the U.S. government, often including a financial one that involves getting paid in one way or another with taxpayer money. So, recession or not, the movers and shakers of Georgetown aren't about to go discount when it comes to grocery shopping. And Safeway is obviously glad they aren't.
Posted by Fresh & Easy Buzz at 3:14 PM