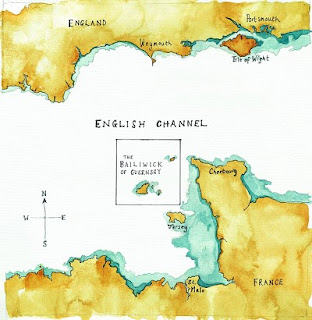 Michael Dennis, an analyst with the London-based financial advisory firm MF Global UK Ltd, is out with a new report (01/18/2010) - 'Welcome to Guernsey'- on Tesco plc, with a specific focus on its Fresh & Easy Neighborhood Market fresh foods and grocery chain in the Western USA: 135 stores in California (Southern and Central Valley); Metro Las Vegas, Nevada; and Metropolitan Phoenix, Arizona.)
Michael Dennis has been following Tesco plc for many years, and was one of the first UK-based financial analysts to dig deep into and take a close look at Tesco's Fresh & Easy USA business, beginning well before the first stores opened in October 2007.
Below are the initial highlights (in italics) from the London-based financial analyst's new report focusing on Tesco's Fresh & Easy U.S. business:
► Two years and two months ago, in late October 2007, Tesco opened its first Fresh & Easy store in Hemet, near LA, Southern California. Today, the majority of the 140 stores are heavily loss making with an average trading margin close to -50%. Tesco initially had plans for 200 stores by Feb 2009 but only achieved half of that, and since then store openings have been cut back to only 3 per month. This means F&E remains severely sub-scale and not at all what F&E CEO Tim Mason had planned. He said in an interview in the Telegraph in June 2007 ‘There is no point going to the US and being a small business.
► The outlook for 2010 looks set to get worse for Fresh & Easy. We are cutting our ex VAT sales forecast in 2010 by 11% to $636m from $715m implying sales growth of only 20% and increasing the level of trading losses from $120m to $200m. This is despite this years store opening program set to fall short of its target for the second year in a row. For 2010 this implies average weekly sales per store of $74k and -31% trading margins. This reflects their continuing over-use of 20% off coupons annihilating gross margin, high fixed distribution.
► The reason for our cut in sales and trading profits is based on our view that Walgreens is planning a more significant move into fresh food. Walgreens has been accelerating the development of their food offering ever since Brian Pugh left F&E in Sept 2008 as joint head of retail operations. Walgreens started selling private label wine in 1,500 stores in December 2009 and has now hired Jim Jensen, head of F&E fresh foods to work with Brian Pugh. They aim to formulate a move into selling ready meals, pizza, cut fruits, salads and more branded fresh food lines. If Walgreens move into fresh foods is successful, generating $130m+ of sales then we believe this could be the beginning of the end for Fresh & Easy.
► Tesco issued $2bn of bonds in 2008 paying 5.5%-6.15% to fund its US expansion plans and has now invested over $1.4bn and accumulated losses of over $630m by Feb this year. If Tesco plan to open more stores in Northern California with similar low sales densities then we believe they will need more funding to absorb more investment costs and trading losses.
► (Advice to shareholders) Take profits. NEUTRAL [TP 430p], based on 5% pro-forma EPS growth in FY10E and potential for cuts to consensus EPS as Tesco US & International disappoints investors.
You can read the full report at this link.
We happen to know that MF Global's Michael Dennis is a regular reader of Fresh & Easy Buzz, and we can see from his new report he's gleaned a few ideas and perhaps insights from a number of our past and most-recent stories and analysis pieces about Tesco's Fresh & Easy and its competitors in Southern and Central California, southern Nevada and Metropolitan Phoenix Arizona.

In particular is the new report's focus on the extensive personnel turnover in the executive and category manager headquarter positions at Fresh & Easy we've broke the news on, written about and offered analysis on, along with our most recent pieces on drug chain Walgreens' move into fresh foods category merchandising. See this story, and the links at the bottom, and this piece, and the links at bottom, as recent examples.

Other examples include our analysis on Tesco Fresh & Easy total sales vs. same-store-sales (called like-for-like sales in the UK), the potentially margin-busting regular use of its 20%-off store coupons (called vouchers in the UK), along with some other topics and issues we've addressed in Fresh & Easy Buzz for the last two-plus years.

We will offer some analysis of our own on some of the issues addressed in the MF Global report and the future of Fresh & Easy in an upcoming analysis piece.

However, we wanted to make the new report from the financial advisory firm available to our readers here on Fresh & Easy Buzz right away.

Sir Terry Leahy isn't going to just sit still and let Fresh & Easy continue losing tons of money. He's got too much riding on it. If things don't improve by the end of the year I think he'll make changes at the top and maybe even make an acquisition of an existing U.S. chain.