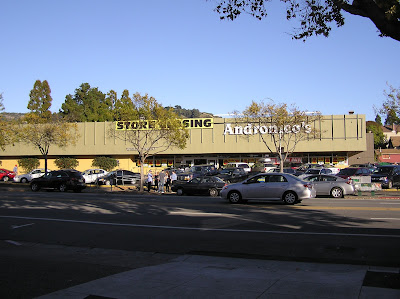 Cars fill the parking lot of the Androncio's supermarket on Telegraph Avenue in Berkeley. The grocer is liquidating all of the merchandise in the store at deep-discounts prior to closing the store, most likely by the end of the month. Click on the photo above to enlarge it. Note the "store closing" sign on the store. [Photo credit: Fresh & Easy Buzz.]

On November 25, 2011 Renovco Capital, the new owner of Community Markets, announced it will close the store at 2655 Telegraph Avenue in Berkeley, California as part of its strategy to turn the once 14-store food and grocery retailer around, leaving it with just five stores in Northern California's San Francisco Bay Area.

The Telegraph Avenue store is the second unit Andronico's has closed in Berkeley in as many months.

It's the third store the grocer has closed since July of this year.

Andronico's Community Markets started 2011 of with eight stores, down from a high of 14 units less than a decade ago. It now has five supermarkets - two stores in Berkeley and one unit each in San Francisco, Los Altos (South Bay Area) and San Anselmo (Marin County).

Renovco Capital bought 82-year-old Andronico's out of bankruptcy court of $16 million. (See the stories linked at the end of this piece for details.)

The closing of the Telegraph Avenue Andronico's supermarket, which has been a fixture at the location in Berkeley for many decades, offers a second store site opportunity for Tesco's Fresh & Easy Neighborhood Market in the Easy Bay Area University city (Cal Berkeley), where it's been looking for locations for some time.

In addition to Fresh & Easy Neighborhood Market, a couple other retailers, including a dollar store chain, are interested in the now vacant University Avenue Andronico's site, according to our sources.

Additionally, we're told a natural foods chain and CVS Pharmacy, in addition to Tesco's Fresh & Easy, are also interested in the Telegraph Avenue location, which our 'The Insider' columnist reported on November 26 will likely close by the end of the year.

Andronico's is already holding a merchandise liquidation sale at the Telegraph Avenue store, offering products for deep discounts, which is what it did when it closed the University Avenue supermarket. It took the grocer just a couple weeks to liquidate most everything at the University Avenue location.

Our commercial real estate and other sources say one possible scenario involving Tesco's Fresh & Easy and CVS Pharmacy in the Andronico's Telegraph Avenue location would be for the two chains to divide the building in half, putting a Fresh & Easy fresh food and grocery market on one side and a CVS drug store on the other.

Fresh & Easy Neighborhood Market and CVS did just that in a former Albertsons supermarket location at 32nd and Clement Street in San Francisco's Outer Richmond District.

The CVS drug store, which shares the building with the Fresh & Easy grocery market (view the floor plan here) opened about a month later.

The Telegraph Avenue Andronico's store in Berkeley has about 20,000 square-feet of selling space, based on our estimation. That would be enough room to put both a standard version (10,000 square-feet of selling space) Fresh & Easy store and a CVS drug store that's about the same size (or slightly smaller) as the unit at 32nd and Clement in San Francisco.

As an alternative, Tesco could put one of its Fresh & Easy Express stores (3,000 square-feet of selling space inside a 4,000 square-foot exterior) in the Telegraph Avenue Andronico's building, although going with a standard sized Fresh & Easy market makes much better sense, in our analysis.

But it's still early. And we suspect additional food retailers will be interested in the Telegraph location.

No deal has been done between the landlord and any retailer yet, according to our sources.

Of the two locations, the vacant Andronico's on University Avenue and the soon-to-be vacant unit on Telegraph,  the Telegraph Avenue location would be the better of the two for Tesco's Fresh & Easy if the grocer were to take just one of the sites, if it can, in our estimation and analysis.

The main reason for this is because a Fresh & Easy (or any other) store at the location would benefit greatly from the heavy pedestrian and auto traffic on Telegraph Avenue.

Additionally, the Telegraph Avenue location is closer to the University of California at Berkeley campus than the University Avenue site is, which is another big plus, because our research and reporting over the last 4-plus years shows that the Fresh & Easy format tends to be most popular among the millennial consumer segment, as well as college and university students.

Both the University and Telegraph Avenue locations offer excellent potential for Tesco's Fresh & Easy however. And commercial real estate buildings that can house grocery stores doesn't open up all that often in Berkeley.

Additionally, the Telegraph Avenue location, to a greater extend, and the vacant Andronico's building on University Avenue to a lessor but significant extent, both also have the potential to be excellent locations for the two farmers market format chains - Sprouts and Sunflower - both of which are putting a major emphasis on opening new stores in Northern California, including in the San Francisco Bay Area.

Berkeley is the ideal demographic for both farmers market style grocery chains, and as noted, grocery store (even smaller format) commercial real estate doesn't become available all that frequently in Berkeley.

November 26, 2011: Andronico's to Close Another Store in Berkeley as Part of 'Comeback' Strategy

October 30, 2011: 'The Insider' Offers Some Advice He Suggests the New Owners of Northern California's Andronico's Markets Should Take Post-Haste

May 30, 2011: 82-Year-Old Grocer Andronico's Needs A Sugar Daddy of Sorts: 'The Insider' Suggest Tesco and its Fresh & Easy Neighborhood Market Might Fit the Bill

Thanks for staying on top of this! I live around the corner from the Telegraph location, and even though Andronico’s isn’t my favorite market, it has been super convenient. Anything that moves in there that sells fresh produce has my vote--I’m encouraged to see that there’s some interested chains.

Would you please send me an e-mail at freshneasybuzz@yahoo.com.

Since you live so close to the Telegraph Ave. Andronico's store, would like to ask you a question about the location please. Just note in the e-mail you are the commentor. Would appreciate it.

A Sprouts or Sunflower Farmers Market would do well at the location. Berkeley = perfect demographics. As crunchy as it gets. UC is a half mile or so away. 30,000 students who can't afford Whole Foods regularly.

God forbid another dollar store moves onto University Ave. there is a smaller on in the complex and a huge on down at San Pablo. Don't we all have enough plastic crap from China?

The closeout sale at the Andronico's on Telegraph Avenue in Berkeley is set to end today, and the store set to close today.