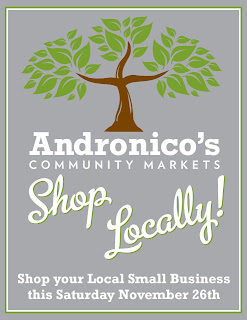 On October 17, 2011 San Francisco Bay area-based Andronico's Community Markets and its new owner, Renovo Capital, said in a press release announcing the closing of its store on University Avenue in Berkeley, California that it didn't plan on closing any of the shrinking grocery chain's remaining three stores in the University city (Cal Berkeley) where it's had a major presence for decades with four supermarkets.

"The new owner (investment firms Renovco Capital and Rosewood Private Investments) said yesterday that it doesn't plan to close any of the remaining three stores in Berkeley. But it wouldn't surprise me in the least bit if the investment firms aren't forced soon to close one of the remaining three Andronico's stores in the city, even though I believe it would like to keep all three for reasons of having a better retailing critical mass in Berkeley.

My predicted candidate for closure in Berkeley, if it comes, is the Telegraph Avenue Andronico's unit, which over the last couple years has lost considerable sales to a nearby Whole Foods Market store and Berkeley Bowl, a very popular and high volume local two-store independent grocer. Both Berkeley Bowl stores are located in the city."

Yesterday, Andronico's said in a prepared statement that it will close the Telegraph Avenue store in Berkeley.

Adam Alberti, who's acting as a spokesperson for the grocer and its new owner, said yesterday that the specific date the store will be closed has yet to be determined. I'm told by my sources though that Andronico's will most likely close the Telegraph Avenue store by the end of the year.

The closing of the Berkeley supermarket leaves Andronico's with just five stores - two units in Berkeley (East Bay area) and one store each in San Francisco, Los Altos (South Bay Area) and San Anselmo (Marin County) - down from a high of 14 units less than a decade ago.

Prior to July 2011 there were eight Andronico's grocery stores in the San Francisco Bay Area.

So far this year Andronico's has closed three supermarkets - a unit in Palo Alto in July, the store on University Avenue in Berkeley last month, and now the Telegraph Avenue-Berkeley store, which of the three was the largest unit in terms of square-footage.

In a follow-up column on October 30 - 'The Insider' Offers Some Advice He Suggests the New Owners of Northern California's Andronico's Markets Should Take Post-Haste - I offered Renovco Capital and Bill Andronico (who remains president of the grocery chain his family owned for 82-years until last month) a five-step playbook of suggested actions to take immediately regarding the turning around of Andronico's.

One of those action steps including the closing of an additional store, as you can read in the October 30 column linked above.

I also suggested Andronico's senior management team do a complete review of the chain's operations, marketing, merchandising and promotional functions. The closing of the Telegraph Avenue store is part of that evaluation process, which began around the first week of November.
Additionally, I had a chance to visit two of the Andronico's Community Markets stores last week - the unit in San Francisco's Inner Sunset District and the store on Shattuck Avenue in Berkeley.

Both stores were fully-stocked and ready for the Thanksgiving holiday. The fresh foods departments - produce, meat, bakery and deli-prepared foods - all looked good, as did the numerous displays throughout the store.
﻿﻿﻿﻿When I last visited the two stores in late summer, they were looking a bit rugged, although not nearly as bad as the University Avenue store in Berkeley closed last month and the Telegraph Avenue store set to close did at the time.

But last week the two stores I visited - and I have a history of knowing what the two units look like at their best - were attractive and well-merchandised.

In my first column about Andronico's financial struggles, on May 30, 2011 here - 82-Year-Old Grocer Andronico's Needs A Sugar Daddy of Sorts: 'The Insider' Suggest Tesco and its Fresh & Easy Neighborhood Market Might Fit the Bill - I suggested one of the first things the grocer should do was to establish a social media presence, particularly on Facebook and Twitter, which is something it wasn't doing at the time.

As I noted in my October 30 column, three weeks later, on June 20, Andronico's Community Markets became active with a Facebook page, and on July 29 launched a feed on Twitter (@andronicos1).

In that same October 30 column (as one of the five action steps I suggested the grocer take immediately), I suggested Andronico's "Hold a 'Thanksgiving' community celebration at each store, thanking shoppers for sticking with Andronico's through tough times - and letting them know better days are coming soon," along with promoting the events on its Facebook page and Twitter feed.

Andronico's did just that in mid-November. For example, take a look (here) at the Thanksgiving-themed customer appreciation days the grocer has been hosting at its stores this month and promoting on its Facebook page. The grocer also used its Twitter feed to promote the "Thanksgiving" customer thank you events.

The grocer created the attractive poster pictured at top to promote the event, touting its stores as the place to shop locally for food and groceries today. 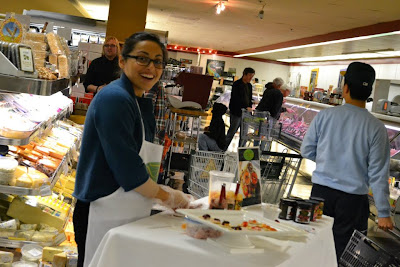 Andronico's Community Markets has also been conducting a variety of special promotions in its stores over the last few weeks, including a fall food festival at its Shattuck Avenue store in Berkeley that featured food samplings from the store's fresh foods departments and tastings conducted by numerous specialty foods vendors, like Dulce Chutney, pictured above.

The event also featured local guitarist Lucas Gonze (below) performing in the wine and spirits department at the Shattuck Avenue-Berkeley Andronico's store. 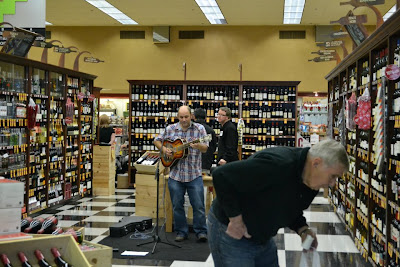 It's been about a month since Renovco Capital officially took over ownership of Andronico's, although its been providing financing for the small chain since around August-September of this year.

The senior management team and store employees have hit the ground running in the last 4-6 weeks, getting the remaining stores back in shape and promoting the "Comeback."

There's much more to do - and I will elaborate on my playbook for Andronico's, which I began in my May 30 column, continued on October 15 and October 30, and recapped here today, in the near future.

The future looks much better for Andronico's Community Markets (I still think the new owner should drop the community markets from the name and return back to the original Andronico's Markets) than it did just a couple months ago. But, as noted - there's still a long way to go in what is a very competitive market region.

October 30, 2011: 'The Insider' Offers Some Advice He Suggests the New Owners of Northern California's Andronico's Markets Should Take Post-Haste

October 18, 2011: Look for Fresh & Easy Neighborhood Market to Grab Closing University Avenue Andronico's Supermarket in Berkeley CA ... If it Can

May 30, 2011: 82-Year-Old Grocer Andronico's Needs A Sugar Daddy of Sorts: 'The Insider' Suggest Tesco and its Fresh & Easy Neighborhood Market Might Fit the Bill

>You can read all of our 'The Insider' columns at this link -  The Insider - along with all past coverage about Andronico's here.
Posted by Fresh & Easy Buzz at 9:56 PM