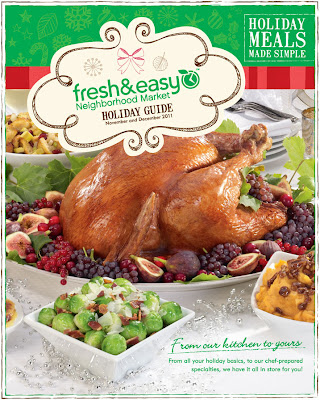 The Thanksgiving and Christmas season food and drink items featured in the holiday guide are set to be available beginning tomorrow, according to Fresh & Easy Neighborhood Market.

Among the many product offerings in Fresh & Easy's 12-page online holiday food and drink guide, which you can view here, include an impressive assortment of its own-brand seasonal ready-to-eat and ready-to-heat refrigerated, fresh-prepared foods, made at its kitchen facility in Riverside County, California. 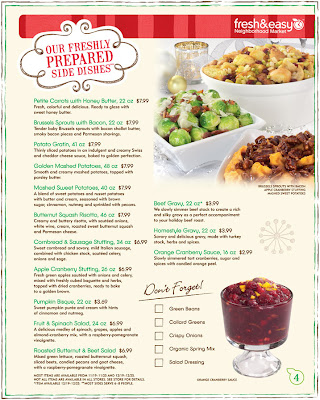 There's also some very decadent gourmet desserts that can do double-duty as gifts, as well as for enjoying at home. For example, there's a Cranberry & Almond Carmel Apple, at $9.99 each - yes, that's each - and the Espresso Truffle Trio ($5.99/3oz). 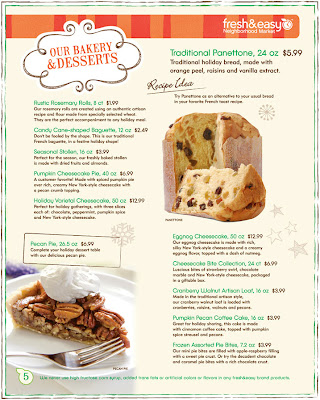 The turkey and beef roast dinners come with three side-dishes and gravy. The ham version comes with four sides and a honey-brown sugar glaze. There are 11 side-dishes shoppers can choose from.

The pre-cooked, ready-to-heat dinners can be ordered by shoppers online, as well as in the stores. The deadline for Thanksgiving is today, for pick up at the designated store from November 21-24.

For example, it's offering Jennie-O brand frozen turkeys for 39-cents a pound, which (see out twitter feed) is the best price we've found so far in Northern California, and the second-best promotional offering we've found in Southern California, after the Superior Grocer's chain, which is offering branded whole frozen turkeys for 37-cents pound in its 30-plus supermarkets in the region.

Fresh & Easy is offering Jennie-O fresh turkeys for $1.19 pound. That price is at the low-end - but not the lowest promotional price - in California, Nevada and Arizona.

For example, Safeway stores (Safeway and Vons banners) in offering its Safeway Select brand fresh birds at 99-cents pound in all three states. Safeway has around 600 stores in California, Nevada and Arizona.

A couple other grocery chains in California, such as 133-store West Sacramento-based Raley's in the north, also have fresh birds (Raley's brand) on sale for 99-cents pound.

Fresh & Easy's $1.19 pound price is a good one though, as a number of other grocery chains in California, Nevada and Arizona are offering comparable brand fresh turkeys for $1.29-$1.49 pound.

Fresh & Easy, which has 135 of its 184 stores in California - there are 28 units in metro Phoenix, Arizona and 21 stores in metro Las Vegas, Nevada - is also doing heavy deep-discounting this month, distributing its 20%-off store coupons weekly online and in its paper-version weekly ad flyers.

So far this month Fresh & Easy has distributed three $10-off (purchases of $50 or more) online discount store coupons via its friends of fresh & easy e-mail program - the first on November 2, another coupon on November 9, and a third $10-off/$50 or more voucher on Wednesday. Today Fresh & Easy sent out another new "friends" e-mailer and included the Wednesday coupon in it.

The store coupons are also being distributed in Fresh & Easy's direct-mail flyers, and in some cases in full-page newspaper advertisements the grocer has run this week in selected markets. We've also seen store workers handing out the coupons to customers in some of the Fresh & Easy grocery markets we've visited this week.

The friends of fresh & easy program is now part of the grocery chain's loyalty card program of the same name. However, customers need not have a loyalty card to use the store coupons.

In fact, the online coupons are available all over the web because various coupon and mom bloggers post them on their sites.

Do an Internet search for "Fresh & Easy coupons" or a similar version, for example, and you'll  see what we mean.

Fresh & Easy Neighborhood Market launched the loyalty card in October. The card gives customers bonus points which they can convert to discounts on their grocery purchases.

For example, shoppers who sign up this month get not only the 250 points that are an incentive for joining, but also an additional 250 bonus points that Fresh & Easy is adding as a bonus. The 500 points are good for $5 off any purchase over that amount.

Additionally, Fresh & Easy is giving members of its "Friends" loyalty card two-times the bonus points this month on numerous items they purchase. For example, last week, when the grocer was offering the frozen Jennie-O brand turkeys for 59-cents a pound (it slashed the price on the birds by 20-cents pound on Wednesday), it gave card-holders 500 bonus-points, which is the equivalent of a $5 coupon.

The Thanksgiving holiday period is a crucial one for Tesco and its Fresh & Easy chain, which is in-part why the heavy discounting is taking place. Not only is Thanksgiving the number one holiday for consumers food and grocery spending - and the most competitive among grocers - in the U.S. (Christmas is second), Tesco's fiscal-year 2011/12 third quarter is over at the end of this month. The quarter began August 28.

The six months from August 28, 2011 to the end of February 2012, when its 2011/12 fiscal-year ends, is an important period for United Kingdom-based Tesco because in March 2012 the one-year clock starts - to 2012/13 fiscal-year-end (February 2013) - which is when CEO Philip Clarke says the global retailer will break-even with Fresh & Easy Neighborhood Market.

Tesco recently reported a fiscal 2011/12 half-year loss for Fresh & Easy Neighborhood Market of $112 million, on sales of $470 million. The loss an about 21% improvement over the loss of the previous fiscal half-year period.

Fresh & Easy needs to continue the trend in order to have a chance of achieving the goal set by Tesco's CEO. Tesco will report the fiscal 2012/13 results in April 2013.

Right now its all about selling.

But the break-even deadline, which is less than 16 months away, is also very much top-of-mind at Tesco's global headquarters in the United Kingdom and at Fresh & Easy's headquarters office in El Segundo, California - and in the Fresh & Easy stores, with its employees.

To see all of the food and beverage items featured in Fresh & Easy's Holiday Guide, click here. A zip code is required to view the guide. If you don't live where there's a Fresh & Easy store, just type in the following zip code: 90266.
Posted by Fresh & Easy Buzz at 3:38 PM

We went to purchase our fresh turkey yesterday.

Is the turkey you are referring to Jennie-O brand fresh turkey?

So was it a mistake; you being charged 99-cents pound? Or intentional - that they reduced the price?

Where was the store you bought it at?

Yes, the turkey was the Jennie-O brand fresh turkey from the booklet advertised at $1.19 (1.29 was a typo).

On the Tuesday before Thanksgiving, the in-store display indicated a .99 price. This was in Fresno, near Fresno State.

I found it odd that they wouldnt highlight their best price in the mailing.