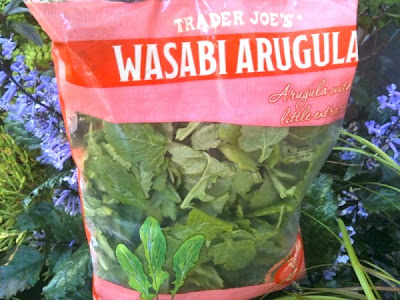 Trader Joe's, which we often refer to as an iconic grocer because of its rabid fan base and creative private brand development and merchandising, has introduced an interesting new addition to its eponymous store brand fresh, packaged produce line - Trader Joe's Wasabi Arugula.

What makes the new Wasabi Arugula item interesting isn't so much what's in the bag though. Instead, it's what's not inside that grabbed our attention.

Trader Joe's Wasabi Arugula doesn't include actual wasabi. Instead, what's inside the bags is a spicier version of the common arugula, also called rocket lettuce, that's sold in many U.S. supermarkets and grocery stores.

The grocer, which has about 360 stores in the U.S., already offers basic arugula or rocket lettuce under its Trader Joe's brand, packaged in cello bags similar to the new "Wasabi Arugula". Therefore, when its private brand development team and the marketers at the corporate offices in Southern California decided to introduce the spicier arugula variety under the same brand, they needed a catchy name. TJ's specializes in catchy names for its various private brand products, after all.

Enter wasabi, that extremely popular - except among the faint of palate - Japanese condiment (it's Japanese horseradish to be specific) - that's not only the staple at every sushi bar in the world but also provides a special kick when paired with many types of foods (and with other condiments like mayonnaise). it's also a catchy and fun word to say. If you don't believe us, say Wasabi fast three times straight right now.

The result: Trader Joe's Wasabi Arugula. And below the product name on the package a tag line says: "Arugula with a little extra punch."

The Wasabi Arugula packaging isn't deceptive. It makes no claim of containing actual wasabi - although including a packet of wasabi salad dressing would make some lovers of the Asian condiment do back flips of joy.

But when spotting the package of Trader Joe's Wasabi Arugula in the produce case from a slight distance away in the grocery aisle (point-of-purchase), the first thing that does come to mind is: "Interesting, arugula with wasabi." That is, until you pick the package up and look at it closely. In other words, the name (the hook) works to draw shoppers' attention to the product. That's good brand marketing.

The 7oz bags of Trader Joe's Wasabi Arugula sell for about $2.39-$2.59, depending on where the particular TJ's grocery market is located in the U.S.

We didn't see any cross-merchandising of chopsticks near where the Trader Joe's Wasabi Arugula was displayed in the refrigerated produce case. Doing so might be a cute idea though, in keeping with Trader Joe's whimsical merchandising philosophy.

>View all the past stories in our Private Brand Showcase feature at these links - private brand showcase, private brands showcase.
Posted by Fresh & Easy Buzz at 4:57 PM

Maybe it is like a Happy Meal, open and you shall find it!

In few months, I will check it out here in Fort Worth, its first in Texas! I will keep that product in mind.

Germans are known for being precise (and methodical) with their products - ask ALDI.