Central to the 26-year run of success for privately-owned Mollie Stone's Markets, which operates nine supermarkets in the San Francisco Bay Area, is its format, which combines a strong selection of everyday food, grocery and general merchandise essentials - what it calls neccessity shopping - with a healthy assortment of specialty, gourmet, ethnic, natural, organic and fresh-prepared foods, which it calls passion shopping.

In many ways the format is the brand for Mollie Stone's.

And speaking of branding, a growing and evolving aspect of the grocer's neccessity and passion shopping approach and format - the stores are neither basic supermarkets or specialty markets - is its focus on private brand development, merchandising and promotion.

For example, although Mollie Stone's has only nine-stores, the grocer, which is majority-owned by partners Mike Stone and Dave Bennett, has three private product brands of its own - Mollie Stone's, which it uses on assorted dry grocery items, fresh meats, produce and baked goods; Mollie O Organic (for organic products); and Nonna Luisa, which is the retailer's Italian foods' brand.

Earlier this year Stone and Bennett also introduced the first item in what we call their "personal brand." That brand is Mike & Dave's, taken from the partners' first names. The first product is Mike & Dave's Wing Sauce.

Mike & Dave's is technically a fourth private brand for Mollie Stone's. But we call it a "personal brand" because not only is it named after the two partners who serve as each others wingmen, but they're also marketing the brand to other retailers via wholesalers and distributors, in addition to selling it in the nine Mollie Stone's stores. Therefore it's a venture product brand for the partners in addition to one sold in their stores.

There will be additional items under the Mike & Dave's brand, according to Dave Bennett, who is the retail operations, marketing and buying/merchandising-focused half of the ownership team. Stone focuses on the overall running of the chain from a headquarters perspective, along with finance, administration, new store development and other related tasks.

Mollie Stone's, which has its headquarters office near the bay in the Marin County town of Mill Valley - its stores are in San Francisco (three units) and (one each in) Sausalito, Greenbrae, (Marin County), Burlingame, San Bruno, San Mateo (San Francisco Peninsula) and Palo Alto (Silicon Valley) - is currently beefing-up its private brand offerings as part of that neccessity shopping/passion shopping overall brand its been developing since Stone and Bennett founded the small but high-volume chain in 1985.

For example, this week the grocer is introducing a line of fresh-cut Glatt Kosher meats under its Mollie Stone's private brand in a number of its San Francisco Bay Area stores, including the three small in size but high in sales volume markets it operates in San Francisco. 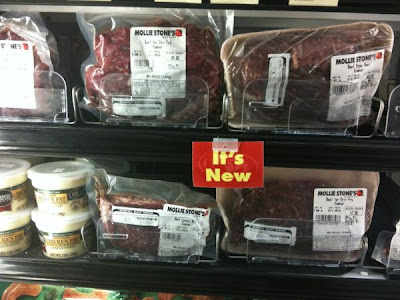 The Mollie Stone's brand Glatt Kosher meat line features a selection of  in-store cut, prepared and packaged cuts of beef roasts and steaks, ground meats and other varieties, as you can see in the photos above and below. 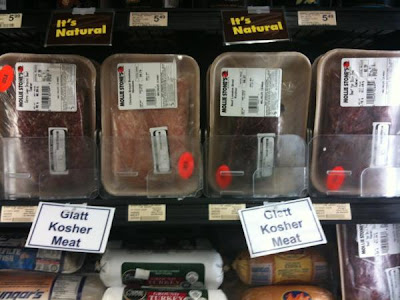 Kosher foods are a specialty of Mollie Stone's - and a passion of co-owner Bennett, who is one of the leading kosher category mavens in the food and grocery business.

For example, earlier in Mollie Stone's history, Bennett managed the Palo Alto store in addition to being involved in running the other stores the partners' operated at the time.

Over the years Bennett and his team at the Palo Alto supermarket created one of the most extensive kosher category product assortments of any chain or store in the Bay Area.

They also focused on enhancing the kosher offering for the key Jewish holidays, which has resulted in the Palo Alto location becoming a shopping venue for many Jewish consumers from throughout the nine-county Bay Area, particularly during the key Jewish holidays like Passover. There are nearly 7 million residents in the region, many of whom are observant Jews.

For example, Bennett tells us Mollie Stone's is in the process of growing its Nonna Luisa Italian foods private brand, which is named after the most important member of any Italian household, not to mention the entire culture. That person, of course, is Nonna (grandmother).

The grocer, according to Bennett, is in the process of adding two new items to its small but growing Nonna Luisa private brand line, both imported from Italy - shelf-stable Gnocchi and Organic San Marzano tomatoes. The label for the tomatoes is pictured at the top of this story.

Bennett tells Fresh & Easy Buzz the new items are will be introduced in the nine Mollie Stone's stores between January-March of next year. There are currently pasta, oils and vinegars under the Nona Luisa brand.

That maven, mensch and Italophile, all rolled up into one, is Angelo Demante, who's managed the Sausalito Mollie Stone's grocery market  since it opened in 1988.

Demante, who's worked in the food and grocery retailing business for over a half century, not only is and speaks Italian, he knows the Italian foods' category inside-out, and regularly creates in the Sausalito store some of the best-looking Italian food product displays we've seen, particularly during holidays such as Columbus Day, Easter and Christmas, when many Italian specialty foods are popular and in demand.

In fact, we're told by a source we're only identifying as Deep Clerk that Demante, who may be the oldest-in-age but youngest-in-spirit - particularly when it comes to the Italian foods category - supermarket store manager in America, may already have an end-cap picked out in the Sausalito store for the new Nonna Luisa brand Gnocchi and canned tomatoes set to be introduced early next year.

If Mollie Stone's can make the launch happen in January, the timing could be perfect: Angelo Demante, the grocer's Italian foods' maven and mensch, can simply replace boss and kosher category maven Dave Bennett's current holiday kosher foods end-cap with his own, featuring the two new Nonna Luisa items imported from Italy, which would be another great way for kosher to meet Italian at Mollie Stone's Markets'.

You can view all the stories in our Private Brand Showcase feature, including our most recent about Safeway Store's new private brand and Fresh & Easy's new burrito bowls, here.
Posted by Fresh & Easy Buzz at 6:31 PM

Love the label on the tomatoes. Nice job Dave and Mollie Stone's. How about a Nonna Luisa pasta sauce line to go with the tomatoes?