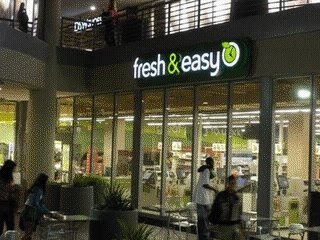 Beginning this week, the Hollywood Boulevard store will start offering beer and wine but not hard liquor, which requires a separate license.

The reason the Hollywood Fresh & Easy market hasn't sold beer and wine (or spirits) until this week is because the retailer's applications for a liquor license and beer and wine permit for the Hollywood store were both denied after the Rite Aid drug store chain, which has a store next to the Hollywood Boulevard Fresh & Easy unit, opposed granting the store the permits because of an ordinance in the city that requires there only be a set number of stores within a given geographical area that are allowed to sell spirits, beer and wine.

The issue has now been resolved regarding beer and wine only, allowing the Fresh & Easy market to start selling the adult beverages this week.

In Fresh Buzz's analysis the ability to now offer wine and beer for sale at the Hollywood Boulevard Fresh & Easy store is a plus for the grocer for a variety of reasons.

First, the neighborhood's demographics -- lots of younger consumers and wine and beer drinkers -- means added sales for the store. Many shoppers have complained since the store opened in January, 2008 about not being able to pick up a bottle of wine or a six pack of beer with their other purchases while in the store. Now they can.

Second, the Hollywood Boulevard neighborhood is a major tourist area. Hollywood tourists are known to sometimes enjoy a bottle of wine or a six pack of beer. Now when tourists shop at the Fresh & Easy store for prepared foods, they can add beer and wine to their purchases.

Additionally, since Tesco's Fresh & Easy offers numerous (over 60 SKUs) proprietary wine blends -- including its $1.99 a bottle ($2.99 in Nevada and Arizona) Big Kahuna brand Australian wine -- the store's wine category offerings will provide some differentiation to shoppers -- and for the grocer -- vis-a-vis the nearly next door Rite-Aid drug store's wine selection. This is a plus for the Hollywood Fresh & Easy store since its offerings aren't just a duplicate of the drug store's.

Selling beer, wine and spirits is a sales plus for grocers because the items help to increase the average customer market basket size (total dollar amount per purchase), which is a key metric for food retailers. Shoppers pick up a bottle or two of wine with their food purchases and buy snacks and other complementary items along with their beer purchases, for example. It's a win-win for grocers.

Customers can now do so to their hearts (or palates) content beginning this week at the Hollywood Bloulevard Fresh & Easy grocery and fresh foods market.

>June 11, 2008: Out of His Compound and Hitting the Street; the 'Militant Angeleno' Shops and Reviews the Hollywood, California Fresh & Easy Grocery Store