Memorial Day 2009 - A Day of Remembrance: In Honor of Those Who Made the Ultimate Sacrifice in Service to Their Country 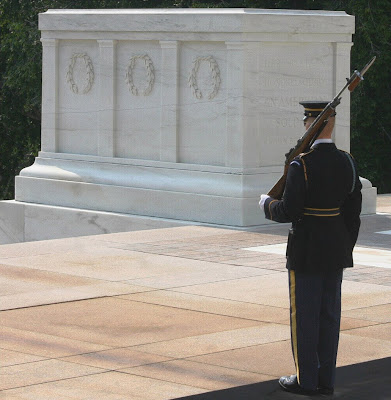 The Tomb of the Unknowns [soldiers] (pictured above) at Arlington National Cemetery in Arlington, Virginia, located across the Potomac River from the nation's capital, is a memorial to all of the American service members who fought and died in foreign wars but who've never been identifield.
The Tomb of the Unknowns, which was established in 1921, contains the remains of one unidentified soldier from World War I, World War II, the Korean War and the Vietnam War.
The Tomb of the Unknowns, which is considered hallowed ground, is guarded 24 hours a day, seven days a week, 365 days a year, by a dedicated military honor guard.
The inscription on the marble tomb simply reads: "Here Rests In Honored Glory An American Soldier Known But to God." 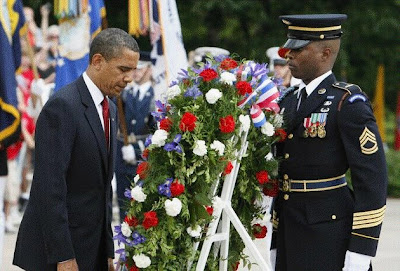 President Barack Obama lays a wreath at the Tomb of the Unknowns at Arlington National Cemetery this morning. [Photo Credit: Charles Dharapak/AP. May 25, 2009.]

we re grate to the people who are sacrifice in service to their country.Thanks to the blog to provide this information.