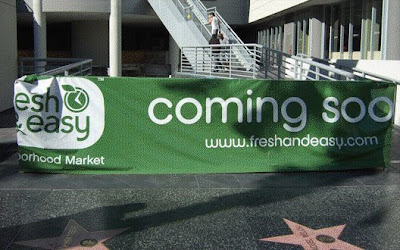 Hollywood Blvd. is where celebrities of movie, television and other show biz fame have stars on the sidewalk with their names on them. The street also is home to the famous Mann's Chinese Theatre, and to the fairly new Kodak Theatre, where the Academy Awards and EMMY Awards celebrations are held each year.

Grand opening events will go on all day. These include food samplings, store tours and entertainment. Fresh & Easy also will donate $1,000 to a local non-profit organization to be named. 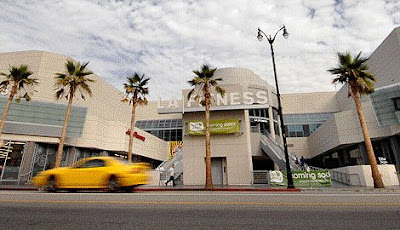 Above is the Fresh & Easy store location in a center on Hollywood Blvd. in Hollywood.

The Hollywood Blvd. neighborhood where the new store is located is an interesting one. The area has become increasingly residential over the last five years. It also hosts thousands of tourists daily, especially in the spring and summer. They come to view the "Walk of Stars," tour the theaters, and enjoy the sights. These sights include numerous street vendors and other interesting folks, who all are looking for their shot at stardom.

The neighborhood also has a vibrant nightlife scene. There are numerous restaurants, cafes and nightclubs, that draw people from all over the region.

There currently are few grocery stores in the immediate neighborhood, so the location should be good for Fresh & Easy. It also should provide the retailer with some interesting publicity for it's retail operation: The Hollywood tabloids and blogs love to report on celebrity sightings at the city's supermarkets. It's likely they will add the new Fresh & Easy market to their location list, especially with it being right on Hollywood Blvd.
Posted by Fresh & Easy Buzz at 5:51 PM