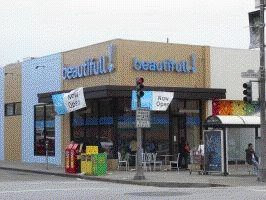 Tesco has postponed the Northern California market region launch of its Fresh & Easy small-format (10,000 -to- 13,000 square-foot) grocery and fresh, prepared foods markets indefinitely, saying the primary reason for doing so is the poor economy, as we've previously reported in Fresh & Easy Buzz.
But recession or not, the current state of the economy isn't stopping a San Francisco Bay Area fresh, prepared foods retail start up called "Beautifull" from opening the first store (pictured at top) of what it says will be numerous fresh, prepared foods markets it plans to open throughout Northern California's Bay Area region.
"Beautifull" is headquartered in the East Bay Area city of Emeryville, which is located just over the Bay Bridge from San Francisco. The fresh foods company has a central kitchen facility in South San Francisco, which is where all of the ready-to-eat and ready-to-heat fresh, prepared foods are made.
The first "Beautifull" store, or what the company calls a "fresh foodspace," opened on April 29 in San Francisco's Laurel Village Shopping District (at 3401 California Street @ Laurel) in a building that most recently housed a Cuban-themed cafe and for many years before that was home to a popular neighborhood diner called Ms. Brown's Feed Bag.
The building's interior space, which is no more than 5,000 square-feet in size, was gutted and turned into the "Beautifull" fresh foodspace" by noted restaurant and retail space designer Cass Calder Smith, who has designed some of San Francisco's most popular and trendy restaurants, including Restaurant Lulu and Terzo.
The "Beautifull" (note the second l in "Beautifull," as in a "full" tummy no doubt) format is devoted strictly to fresh, prepared foods of all kinds, ranging from comfort foods like macaroni and cheese, roast beef and meatloaf to more upscale offerings, along with a complete selection of ethnic entrees and side dishes, ranging from the basic to the exotic.
A sampling of the prepared foods items in the store includes: (entrees) ready-to-heat Prime Ribs of Beef, Spaghetti & Meatballs, Southwestern Style and Leek & Wild Mushroom Corn Frittata's, Thai Chicken Curry, Grilled Salmon, and Moroccan Chicken, for example, along with dozens of side dishes including various potato and rice-based sides, vegetable side dishes and much more.
The format also features ready-to-eat desserts of all types, along with numerous beverage offerings. [You can view the various prepared foods' offerings at the company's Web site here. 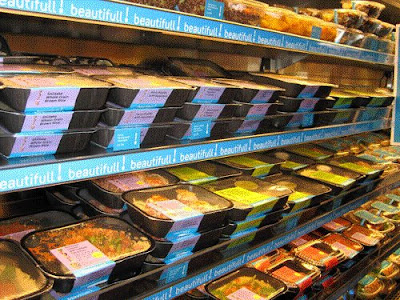 Have been in the store twice now, once a couple days after it opened and again this week. Tempted to say it looks Beautifull. But seriously the designer did do a nice job. Also was surprised how busy it was considering the economy. But it is SF. Some of the dishes excellent. Others need work.

I disagree somewhat with the comment that customers are choosing "less prepared foods and opting more for basic food and grocery purchases and cooking at home".