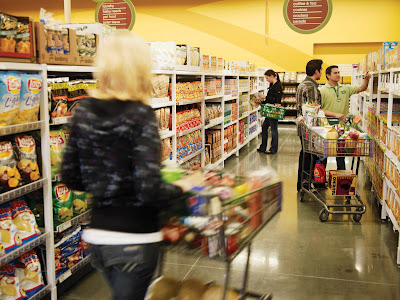 According to Nielson Company, Uwins will present "The Story of Fresh & Easy," a presentation highlighting how "Tesco brought its philosophy of creating value to the U.S."

Uwins "will discuss how Tesco used research to determine how it would create value for customers in the United States, as well as how Tesco is performing with the creation of the brand, the stores, and the company," according to Nielsen.

That part of Uwins' talk should be interesting in terms of the various mixed scenarios currently in the markeplace and in the financial markets regarding the relative sales performance of Tesco's small-format, combination basic grocery and fresh/specialty foods-oriented stores.

Tesco also continues to open new stores in Southern California, Arizona and Nevada. The grocer says it plans to have at least 150 of the small-format, convenience-oriented Fresh & Easy stores open in those three market regions by the end of this year. Originally, Tesco estimated it would have 200 stores open by the end of 2008.

As we reported here in late March, Fresh & Easy Neighborhood Market is currently taking a three month new store opening pause--from April to the end of June--but says it will resume its rapid new store opening schedule again beginning in July, and running until the end of the year.

In order to have 150 stores open and operating by the end of 2008, Tesco will need to open 89 new stores in the the six month period from July to December, 2008. This works out to opening a new store about every 2.5 days. Fresh & Easy opened new stores at about that pace between late October, 2007, when the first grocery store opened in Hemet in Southern California, to early April, 2008, when the 61rst Fresh & Easy grocery market opened.

The Nielsen Company's annual Consumer 360 conference is one of the consumer packaged goods industies top events. It's usually attended by over 1,000 CPC and retailing industry executives and others.

This year's conference will be held on June 3-5 at the JW Desert Ridge Resort and Spa in Phoenix.

Other speakers and topics at the conference with a retail focus include:

>Lisa Kauser, vice president consumer and consumer solutions, Unilever North America. Her presentation is titled: "Shopper Showdown: How to Thrive in the New Economy." In her talk, Ms. Kauser will explore how consumers are evolving their shopping behavior and adjusting store and brand choices to offset increasing food and retail prices, according to Nielsen.

For more information about the conference, including additional educational sessions, topics and speakers--as well as obtaining registration information--you can check out the Nielsen Consumer 360 Conference website here.
Posted by Fresh & Easy Buzz at 4:09 PM