What Others Are Saying: The LA Times on Safeway's New Small-Format 'Market by Vons' Grocery Store in Long Beach, California 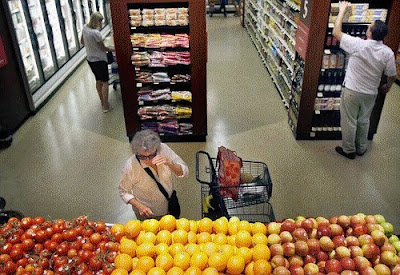 Above is a photograph of the inside of the Long Beach the Market by Vons. Notice a couple things: The fresh produce in the store is bulk and displayed farmers' market style--as is the norm in California food retailing--rather than packaged like it is at Tesco's small-format Fresh & Easy grocery stores. Second: notice the store shelving/gondolas. The shelving is more high-profile, modern-supermarket-style rather than the warehouse store-type shelving Fresh & Easy stores use. The end-caps in Safeway's "The Market" format stores, like this one, also are made of wood, which is stained a deep, rich color. (Photo: Rick Loomis. Courtesy: Los Angeles Times.)

On Thursday, May 15 Fresh & Easy Buzz reported on the opening of Safeway Stores, Inc's first small-format grocery store, it's 15,000 square foot the Market By Vons, in Long Beach, California.

Today's (Saturday, May 17) edition of the Los Angeles Times has a story in the business section by business staff writer Jerry Hirsch about the store, which as we wrote in our piece is located in an older Vons supermarket which Safeway decided was too small and out of date to turn into one of its Lifestyle format supermarkets.

The Market by Vons is located on Ocean Blvd. in the Belmont Shore neighborhood in Long Beach.

Rather than attempt to convert the older Vons supermarket into a Lifestyle format Vons, Safeway decided to remodel it and convert it into its first "The Market" small-format, basic grocery, specialty and fresh, prepared foods grocery store.

Safeway will be converting other such stores in its market regions to the small-footprint, somewhat upscale "The Market" format. For example, in Northern California, the Pacific Northwest, Arizona and Colorado, the stores will be called the "Market by Safeway." In other regions like Chicago, the "Market by Dominick's," and the like, depending on the particular retail banner the grocery chain operates in a given market region.

The stores are sort of a hybrid basic grocery store, fresh, prepared foods and specialty foods' market, similar to Tesco's Fresh & Easy, but also different in look and kind.

In terms of the upscale and specialty products category perspective, Safeway has lots of experience in the categories from operating its Vons' Pavillions format supermarkets in Southern California for many years.

The Pavillions' banner stores, which Safeway obtained when it acquired the Vons chain and has continued to open additional supermarkets under the banner since then, also was in-part one of the inspirations for the food and grocery retailer's Lifestyle format, which it's in the processing of converting--except those stores it turns into "The Market" or decides to close--all 1,740-plus of its supermarkets in the U.S and Canada into. The retailer has converted about 70% of its total supermarkets into Lifestyle format stores to date.

There are numerous synergies between the Lifestyle format--which is a mix of basic food and grocery products value-priced, along with fresh, prepared foods and specialty, natural and organic offerings, with a big emphasis on "fresh," including produce and meats.