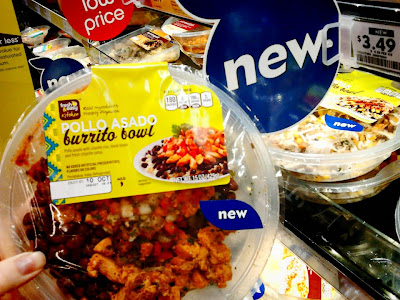 In addition to the meat main course, the burrito bowls also contain ingredients eaters would expect to see inside a traditional tortilla-wrapped burrito, including rice and beans. We spotted corn in one of the bowls as well.

The everyday retail price for all three varieties of the fresh&easy kitchens' burrito bowls is currently $4.49 each.

Burrito bowls,which are essentially open-face traditional burritos in a bowl, have been a big hit for Chipotle Mexican Grill, the natural foods and ingredients-focused fast-casual food chain that's been growing rapidly since the first restaurants were opened in 1993.

There are currently about 1,200 Chipotle restaurants, with many more on the way. Most of the units are in the U.S. Chipotle also has restaurants in Canada and the United Kingdom.

The chain, which has as its motto "Food With Integrity," takes great care in sourcing the ingredients it uses in it ready-to-eat food items. It also puts a major effort on ethical and local food sourcing, along with environmental sustainability.

Unlike most U.S. fast food chains, Chipotle doesn't attempt to offer every sort of food combination possible on its menu, instead offering a limited assortment of items, using a mass customization approach that offers the basics, such as beef, chicken and pork as the base, and then lets customers customize the offering and build their own meals. For example, see the burrito bowl menu item here.

A number of U.S. natural foods companies have had frozen burrito bowls on the market for some time. Among the most popular brands are Evol Foods, Amy's Kitchen and Helen's Kitchen. The food-makers offer all-vegetarian varieties of burrito bowls as well as the meat versions. The frozen bowls take just a few minutes to heat in a microwave oven.

All three of the above noted brands are carried by numerous grocery chains, independents and natural foods retailers.

For example, Whole Foods Market carries the Evol and Amy's Kitchen burrito bowls in most of its 300-plus stores in the United States. The Amy's Kitchen brand is popular with big supermarket chains as well as in natural foods stores.

We've also spotted ready-to-heat and ready-to-eat burrito bowls in the deli/prepared-foods departments (refrigerated and heated cases) in a number of Whole Foods stores, including in California.

California, Nevada and Arizona, the three western states where Tesco has its 183 Fresh & Easy stores, are, along with New Mexico, Texas and Colorado, the most Mexican food-focused states in America. The traditional burrito, for example, has become the first cousin to the hamburger among eaters in the three states, regardless of nationality.

The burrito bowl, in our culinary analysis, is sort of the California-Mex version of the traditional burrito - a blend of Mexican food tradition meets California cuisine.

From a culinary perspective the burrito bowl can also be conceptualized perhaps as the spicy Latin relative of the open-face sandwich, which is served on a plate rather than in a bowl though, and hasn't been a very popular restaurant item in America since the 1970's.

The burrito-minus-the-tortilla is becoming increasing popular, particularly in the west. Therefore, if Fresh & Easy displays its new private brand line of burrito bowls properly in-store, which it's currently doing in our observation, and promotes the new line, we think the grocer just might have a winner on its hands.

We also think a couple all-vegetarian burrito bowl varieties, and maybe a couple breakfast burrito bowls, are the  logical SKUs for a line extension when the time comes.

[Readers: Click on this link - private brand showcase - to read a selection of related stories.]