In addition to taking home first place honors, the Las Vegas resident will also have all or most of her food and grocery purchases at Fresh & Easy for the rest of the year paid for because she received $5,000 worth of store gift cards from the grocer for her winning bag design.

Jacobsen's fresh fruit-themed design was chosen as first place in Fresh & Easy's recently-ended Design-a-Bag contest by members of the grocery chain's "friends of fresh & easy" e-mail-based marketing and quasi-loyalty program, who voted on ten finalist designs out of 800 submissions, from June 27-to-July 10. The contest was launched on April 5 of this year.

Fresh & Easy Neighborhood Market says 30,000 members of "friends of fresh & easy" voted in the contest. The e-mail-based program has about 350,000 members, according to the grocer.

Jacobsen, who says she's originally from Idaho and moved to Vegas three years ago, and who paints as an avocation - which is evident in the vibrant use of colors featured in her painted design - said about hearing she won first place in the contest, "I wanted my design to be bright and fun so it could capture the feeling I get when I visit my local store. It’s been a really great experience, and I thank everyone who supported my design."

She also expressed surprise in winning first place, saying about the win, "I was so surprised. I didn’t even tell anybody that I initially submitted it. I was stunned when I got the call that I was a finalist. Then to find out that I won was a huge shock. My boyfriend's family was going nuts. All of my family in Idaho was really excited for me too." 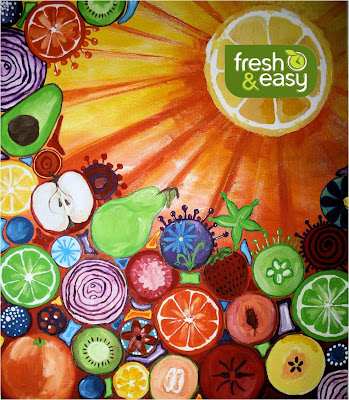 Bag designed in Vegas won't stay only in Vegas

Along with the personal pride of winning first place and the $5,000 prize, Jacobsen's design will be turned into a reusable shopping bag and sold in Fresh & Easy Neighborhood Market's stores in California (127 units), metropolitan Las Vegas, Nevada (21 units) and metro Phoenix, Arizona (28 units) beginning later this year.

Tesco's Fresh & Easy has been selling a reusable bag featuring last year's winning design by Josephine Close in its stores all year. The bag sells for 99-cents.

We like the Vegas resident's design, particularly because of its use of fresh fruits and vibrant colors. In fact, it was one of our three favorites in the contest.

Artwork in the stores

We think Tesco's Fresh & Easy Neighborhood Market, which has borrowed numerous operations and merchandising concepts from competitiors Trader Joe's and Whole Foods Market, should borrow another one from the two grocers and offer Tonya Jacobsen a full or part time job creating artwork for the Fresh & Easy stores, starting with the produce departments, which could use some brightening up, say starting with a few fresh fruit and vegetable-themed murals, which the fresh food and grocery chain can hang on the walls or display on easels - or both. Notice, for example, how her artwork brightens up the store in the photo at top.

Whole Foods Market, for example, employs full time artists in all its stores in New York City, while Trader Joe's has full time chalkboard artists in all its grocery markets in the U.S, who create the colorful chalkboard art and signage that's become an iconic part of the TJ's shopping experience. [See - June 21, 2011: The 'Art' in Food Retailing On the First Day of Summer at Whole Foods Market in New York City's Chelsea District.]

Having in-store artwork painted by a customer and the winner of the Design-A-Bag contest would also be a great story for the grocer to be able to tell: "Customer/painter/bag design contest winner creates fresh produce-inspired paintings for Fresh & Easy stores."

And Jacobsen doesn't have to be limited to the fresh produce theme either. Creativity and inspiration are two key elements of art. And there's more to the stores than produce.

For example, there could be prepared foods'-themed art, along with numerous other in-store and neighborhood-oriented themes, all based on what inspires the artist and store employees, all of which Fresh & Easy could use in the stores and rotate in-and-out periodically.

The artwork could be localized as well - Vegas themes in Las Vegas; urban themes in Los Angeles and San Francisco; agricultural themes in Fresno and Bakersfield in California's Central Valley; and so on.

As an example, we would turn the already completed design pictured at the top here, which is from one of the ten contest finalists, Janeil Lim of Los Angeles, into a mural and use it in Fresh & Easy stores in neighborhoods which have a high degree of ethnic diversity, such as south Los Angeles and others.

We would start by putting a mural on the wall in the produce section, or on an easel there, in each of the 21 Las Vegas metropolitan area Fresh & Easy grocery markets, say about a week before her bag debut for sale in all 176 stores. In-store artwork by a Las Vegas resident, a nice local angle.

Food and grocery retailing-merchandising is an art.

And a great way to enhance that art is with some real artwork in-store. Therefore since, as we were the first publication to report, Tesco is in the process of making numerous changes inside its Fresh & Easy stores, the timing is perfect for some in-store art, the cost of which would be significanty less than most of the major changes we've reported the grocer is making to the stores. (See the linked stories at the bottom of this piece.)

After all, sometimes it's much smarter for a grocer to pick the low hanging fruit first. And often it's starring you right in the eyes.