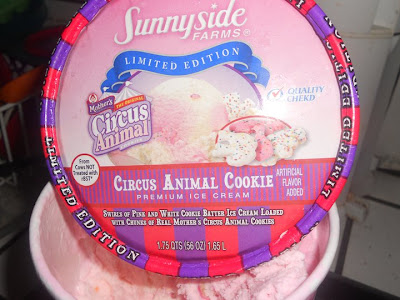 But the relationship goes far beyond merely sharing the private brand: The two competing chains are also the primary owners of the company that produces the dairy products via a joint-venture called Super Store Industries, based in Lathrop, which is located between Modesto and Stockton in the Northern Central Valley.

Save Mart operates supermarkets under the Save Mart, Lucky, S Mart and Max Value banners, along with a chain of discount warehouse format stores called Food Maxx. The stores are located throughout Northern California and south to Bakersfield in the Central Valley.

Raley's operates three supermarket banners - Raley's (combo superstores as well as supermarkets), Bel Air and Nob Hill Foods, along with a discount warehouse banner of its own, Food Source. It's stores are primarily in the Sacramento region, San Francisco Bay Area, south coast and Northern Central Valley areas. Both chains also have stores in Northern Nevada.

As a part of Super Store Industries, the main feature of which is a buying-merchandising office and massive distribution center for Save Mart and Raley's in Lathrop, the joint-venture also owns two dairy processing plants, Mid Valley Dairy/Sunnyside Farms in Fairfield and Sunnyside Farms in Turlock.

The Fairfield plant produces Sunnyside Farms' and Bayview Farms' fresh fluid milk, while the Turlock plant produces cultured dairy products - cottage cheese, yogurt and the like - and ice cream and frozen novelties under the Sunnyside Farms private brand, which is offered in the various banner stores operated by the two competitors.

And it's Sunnyside Farms brand ice cream which is the topic of this Private Brand Showcase piece today.

Earler this year the Sunnyside Farms' ice cream brand product development team at Super Store Industries' came up with a plan to create a series of limited edition ice cream flavors as a way to celebrate the key summer ice cream selling season and to create some excitement and added sales for the Sunnyside Farms brand in Save Mart and Raley's-owned stores.

The Central Valley area near Turlock where the Sunnyside Farms ice cream plant is located is a key watermelon growing area, so the limited edition flavor ties-in to one of the many locally-grown crops from the area, as well as fitting the war summer season well.

The ice cream flavor development team followed up on the seasonal Watermelon Sherbet ice cream item in late June when it launched its second limited edition ice cream flavor into the Raley's and Save Mart stores. That flavor, Sunnyside Farms Cinnamon Churro Premium Ice Cream, celebrates the popular hand-held Mexican desert item the Churro, which is a cinnamon favored bread or cake-like treat that's popular with Latinos but in recent years has also become a cross-cultural favorite, particularly in parts of the U.S. like California and Nevada which have high Latino or Hispanic populations. 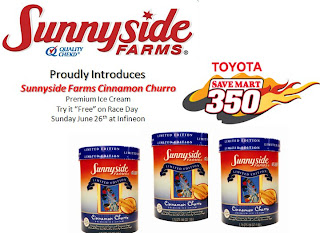 California's Central Valley and much of Northern California has a significant Latino population, so like the Watermelon Sherbet the Sunnyside Farms Limited Edition Cinnamon Churro Premium Ice Cream also has a strong local angle in terms of celebrating one of the many foods Hispanics have introduced into the region and America at large.

Sunnyside Farms introduced the limited edition ice cream flavor with a Latino twist in a big way on June 26, offering free samples from its Sunnyside Farms ice cream truck at the Toyota Save Mart 350 NASCAR race at Infineon Raceway in Sonoma County. The limited edition flavor was introduced into the Save Mart and Raley's stores just a couple days earlier. 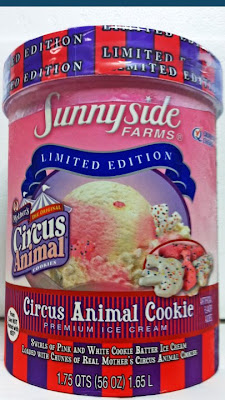 This week Sunnyside Farms is introducing its newest limited edition ice cream flavor into the stores owned by the two grocery chains. That flavor, Sunnyside Farms Circus Animal Cookie Premium Ice Cream (pictured above and at top), features swirls of pink and white cookie batter ice cream and Mother's brand Circus Animal Cookies, which have been a favorite of kids of all ages in Northern California for many decades.

Mother's is an iconic cookie brand in Northern California. And its Circus Animal Cookies have been a favorite of three generations of children - and their parents - in the region, due in large part to the fact the brand was founded in San Francisco in 1914 and baked in nearby Oakland from 1915 until 2006. [See the companion story below on the blog or read it by clicking here -

Save Mart and Raley's should have a big hit on its hands with the Limited Edition Sunnyside Farms Circus Animal Cookie Premium Ice Cream because it should evoke nostalgia in older consumers who grew up eating the Mother's Circus Animal Cookies while at the same time grabbing the attention of the latest generation of kids who will want to taste the ice cream that includes their favorite animal-shaped cookies in it. 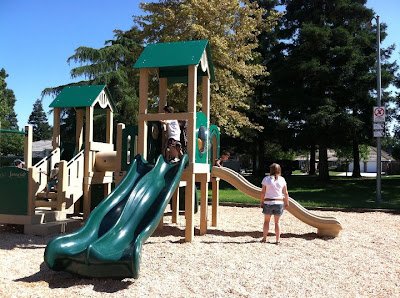 And speaking of kids, ice cream and local angles, on Saturday (July 16) Sunnyside Farms' employees who work at the Turlock, California plant, along with volunteers from the community, gave a little something back to the community's children when they spent the day constructing a "green" play structure called the "Sunnyside Farms-Got Milk Play Structure," in Bristol Park in the city of 75,000 residents.

The "environmentally friendly" play structure (pictured above and below) is made from 41,310 recycled plastic milk jugs. 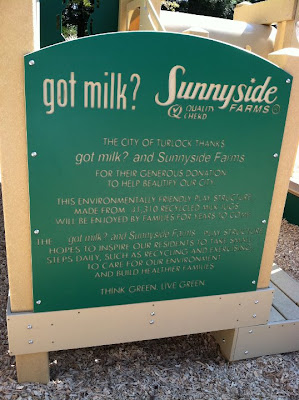 Along with wanting to provide a place for kids to have fun and get exercise, Sunnyside Farms' says it hopes the play structure will inspire Turlock residents to "take small steps daily, such as recycling and exercising, to care for our environment and build healthier families"

That play structure will come in handy after the kids (and mom and dad) enjoy the newest limited edition ice cream from Sunnyside Farms, made right in town and packed with those Mother's Circus Animal Cookies. Mom and Dad will have to find their own form of exercise though. 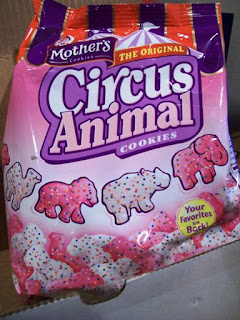 The creation of Sunnyside Farms' latest limited edition ice cream featuring Mother's Circus Animal Cookies would never have happened were it not for food giant Kellogg Company buying the Mother's brand and assets in 2008 and re-launching Mother's Cookies in mid-2009.

Read why in the sidebar below:

The Mother's brand of cookies is extremely popular in Northern California, due in large part to the fact the company and brand was founded in San Francisco in 1914 by N.M. (Noah) Wheatley, who ran a newspaper stand on the corner of Market and Kearney Streets in the city and bought the rights to a recipe for some home-baked cookies from one of his customers. The recipes he bought produced the first Mother's Cookies.

In 1915 Wheatly set up a one-man-shop in a small building across the bay on 12th Avenue in Oakland, where he baked and sold about 2,000 Mother's cookies a day, until in 1922 he moved to a larger location on 18th Street in Oakland and hired some employees.

From there, sales of the Mother's brand of cookies began to soar, and by 1942 Wheatley had moved into a larger and much more modern bakery plant at 810 81st Avenue in Oakland, where he eventually had over 750 people working for him there and in sales in several additional western states.

In 1962 the Wheatley family sold the thriving Mother's Cookie brand and company to George Markham, who was a vice president at the company.

Mother's continued to grow and Markham later sold the company to a group of employees who operated the cookie company from 1983 to 1996.

In 1996 the company was sold to to Artal NV, a Belgian company that two years later sold Mother's Cookies to Specialty Foods Corp., which was a conglomerate put together by the famous (or infamous) investor-Bass Brothers who were doing a roll up in the cookie brand category, for about $100 million.

Prior to buying Mother's Cookies, Specialty Foods Corp. purchased the Archway cookie company. After the Mother's purchase the Bass Brothers' conglomerate became the third-largest cookie-baker and marketer in the U.S., after Nabisco and Keebler.

In 2000 Specialty Foods Corp. sold the combined Archway and Mother's company (remember it was an investor roll up) to Italy's Parmalot Finanziari for about $400 million. At the time Parmalot was fast-growing and diversifying from its then primarily milk and tomato products business into cookies and other categories.

Mother's ownership merry-go-round was far from over though.

In 2005 Parmalot filed for bankruptcy amid a scandal over the illegal sale of corporate bonds that ended up taking the company down.

In 2005 Parmalot sold Archway-Mother's to the U.S. private equity firm Catterton Partners, which proceeded to close the Oakland Mother's Cookies factory in 2006, firing about 240 workers and moving the baking operations to Archway plants in Ohio and Canada.

Things got worse though.

In 2008 there was an accounting scandal at the private equity firm-owned Archway-Mother's Cookie Company, which combined with the financial crisis that hit the same year spelled the end - the company filed bankruptcy and fired all the workers, taking the Archway and Mother's brands off grocery, drug and mass merchandise store shelves.

Consumers in Northern California where Mother's Cookies got its start in 1914,took the news personally. For some it was like a loss of a family member.

Campaigns were launched asking various companies to buy the Mother's brand and assets and bring the cookies back.

Northern California grocery chains like Safeway Stores, Save Mart, Raley's and others even joined in, suggesting to companies like Nabisco, Keebler and others that if they took over the brand there was room on the shelves for it.

In 2008 Lance Inc. bought the Archway brand and assets and reopened the plant in Ashland, Ohio.

But it didn't want Mother's.

But shortly after, in December 2008, food giant Kellogg Company, which owns leading cookie brand Nabisco, got approval from the bankruptcy court to acquire the Mother's brand and assets and announced it would bring back most of the brands popular varieties, including Circus Animals, and have the cookies in the pink and white packages back on store shelves by mid-2009, which it did, re-launching Mother's Cookies in May 2009.

The first stores to get the cookies were located in Northern California.
Posted by Fresh & Easy Buzz at 9:19 PM

I have a question about Sunnyside Non-fat Frozen Yoghurt. It's great if you are watching your cholesterol, but if you are diabetic. Why not sweeten with Splenda or the like. I haven't been able to contact Sunnyside directly, I hope that they know I will not buy their product any more unless my suggestion for change is implemented.

First off, I love your ice cream. So many flavors to choose from. What puzzles me is that you have almost every fruit flavor covered except one, Banana. Dreyer's used to make Banana Nut, with Walnuts I beleive, but refuse to make it any more. How about it? Do I have to buy Ben and Jerry's Funky Monkey to get my Banana ice cream fix. People love Banana, please bring it back!

I would love to see Watermelon Sherbet make a comeback this summer. It was great and I purchased multi containers each shopping trip last year. It became difficult to find after a while so other must have liked it also. I got desperate and went to multiple stores in order to find it How about it?! Watermelons should be plentiful and cheap. It would make my summer. This should be a summer staple not limited. I would buy it year around
Watermelon Junkie