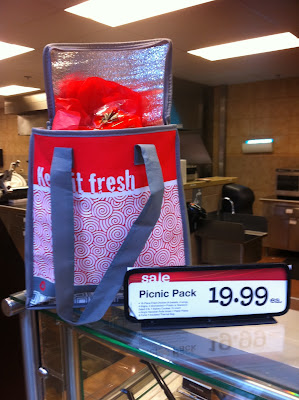 ﻿Raley's adds value with its Family Picnic Pack in two key ways: The product's the-whole-is-greater-then-the-sum-of-its-items nature offers a convenient and affordable concept for shoppers; and the reusable thermal carry bag provides a value that keeps on giving long after the picnic is over and the food is consumed. [Photo credit: Fresh  & Easy Buzz.]

We're always on the lookout for retailers that come up with creative, value-added ways to merchandise and promote their own-brand products.

One such development that recently caught our eye is the Family Picnic Pack created and now being offered for sale by West Sacramento, California-based supermarket chain Raley's, which operates 133 stores under the Raley's (superstores), Nob Hill Foods, Bel Air (supermarkets) and Food Source (discount warehouse) banners in Northern California and Northern Nevada.

Raley's Family Picnic Pack features all the fixings needed for a summer picnic (except for the drinks and napkins), and includes a reusable thermal carry-bag to tote everything in.

The centerpiece of the retailer's picnic pack is a 16-piece assortment (4 breasts, 4 wings, 4 thighs, 4 drumsticks) of Raley's in-store-made ready-to-eat fried chicken, which comes chilled so it can be kept cold in the thermal carry bag.

Along with the fried chicken, the Family Picnic Pack includes a 3lb container of potato or macaroni salad, a 15-count package of cookies from the in-store bakery, a 12-count package of paper plates and a dozen-pack of  forks, all under the Raley's store brand.

In addition to the selection of Raley's brand ready-to-eat foods, paper plates and cutlery, the grocer's Family Picnic Pack also includes a package (12-count) of King's (brand) Hawaiian Rolls, which is a popular brand and item in the market regions where it has stores.

The reusable thermal bag is designed to keep all of the refrigerated items at a proper temperature while traveling to and while at the picnic, along with serving as a carry bag to hold the Family Picnic Pack, which is retailing for $19.99 and designed to feed eight people, which works out to just $2.50 per-person.

Raley's Family Picnic Pack is a hit on three levels from a retailer product creation standpoint, in our analysis.

First, it's value-added, meaning it takes various existing single items sold in the stores and bundles them into a seasonal (summer picnic) theme, thereby creating a product (the Family Picnic Pack) which previously didn't exist.

A major benefit of this is that most customers aren't likely to purchase each of the private brand items contained in the picnic pack individually while on a shopping trip. However, by bundling the products into a thematic single product, customers are more likely to do so because of the suggestive merchandising and selling aspect of the Family Picnic Pack.

The added value comes both in creating the meal concept of the Family Picnic Pack - (almost) everything needed for a picnic - along with including the reusable thermal carry bag as part of the package. 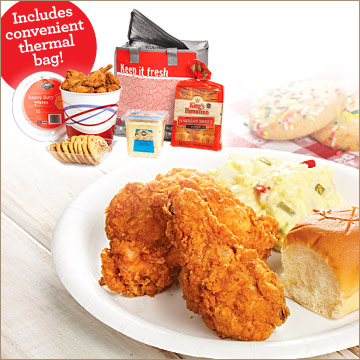 Second, by focusing the picnic pack item selection primarily on Raley's brand products, the retailer not only can achieve incremental sales on the own-brand items (see above) but also achieve secondary marketing and product promotion for the private brand ready-to-eat and non foods items.

For example, buying the Family Picnic Pack might be the first time many customers will have tried some or all of the Raley's brand products that comprise it. So in that instance it has the ability to generate brand and item trial, which is a key brand marketing objective.

Further, since all but one of the items in the picnic pack are private brand, it also serves as a promotional vehicle for the Raley's brand products.

Lastly, at $19.99 the Family Picnic Pack is affordable - the total cost is less than buying the fried chicken, potato or macaroni salad and rolls at KFC, and the plates and forks separately, for example, plus you get the thermal carry bag (added value) - while still providing a high single-SKU-ring for Raley's.

For example, for each shopper who adds a Family Picnic Pack to his or her grocery purchases at a Raley's-owned store, that total order jumps by $20, which is music to a grocer's ears because the more a customer spends during a single shopping trip (market basket size) the better it usually is for a food retailer's profit margin on the order.

Additionally, affordability combined with a high ring is a great combination for a retailer, assuming the product sells, because it offers a greater opportunity for higher volume sales. When the $19.99 Family Picnic Pack is broken down to its per-serving price of $2.50 person (for eight), which Raley's isn't doing in its promoting and advertising of the seasonal item but should, the value becomes much more apparent. A compare the price-per-serving to KFC sign in the stores would likely sell additional picnic packs for example.

The family-owned grocer, which has about $3.1 billion in annual sales, is currently offering its Family Picnic Pack in selected Raley's, Bel Air and Nob Hill Foods banner stores. According to a Raley's spokesperson, plans call for the retailer to offer the picnic pack through most of August. Customers can also pre-order it on the grocer's website for later pick-up in-store.

In addition to its flagship "Raley's" store brand, the West Sacramento-headquartered chain also offers products under its Sunnyside Farms and Bayview Farms (dairy products) private brands, both of which it shares with Modesto, California-based competitor Save Mart Supermarkets, and Nob Hill Trading Company, which is an upscale-oriented specialty foods' brand.

Raley's is also an owner-member of the Topco private brand development and marketing cooperative. The grocer features a number of the cooperative's brands in its stores, including Full Circle, which it uses as its natural and organic products' store brand.

Adding value like Raley's has done with its Family Picnic Pack not only is a good way for food and grocery retailers to increase sale but it's also an excellent way to draw attention to their private or store brands. And using seasonal themes, such as summer and picnics, affords grocers an ongoing way to create value added items like Raley's has done with its summer season picnic pack.