The Sunday Supplement: Grocers Need to Go Big or Go Home When in the River City of Stillwater, Minnesota

Giant grocery shopping carts as promotional "vehicles" for grocery chains might just be the new black.

The 12-foot-high Save Mart shopping cart (pictured here), which is nicknamed "Big Red" and called "Piccinini's Pride" by some Save Mart insiders (Bob Piccinini is the majority-owner, chairman and CEO of the 240-store supermarket chain) is powered by a 454 cubic inch Chevy racing engine. It can hold three grown men inside the basket, with enough room leftover for a few kids and  numerous bags of groceries.

Save Mart's "Hot Rod" cart has been making the rounds to various events in Northern California this summer (see the stories linked above), a well as stopping off at a few of the grocer's Save Mart and Lucky banner stores in the region.

The giant shopping cart's next major appearance is in August, when it will take center stage at the popular Hot August Nights celebration in Reno, Nevada, where Save Mart operates stores in addition to Northern California and California's Central Valley.

Today in Stillwater, Minnesota, thousands of miles from Modesto, California were Save Mart Supermarkets' is headquartered, Cub Foods, a local chain owned and operated by Eden Prairie, Minnesota-based Supervalu, Inc. unveiled its own giant grocery shopping cart - racing motor not included - at the annual Lumberjack Days Grand Parade in Stillwater, which is located on the St. Croix River.

Supervalu, Inc.-owned Cub Foods operates 69 supermarkets in Minnesota, Wisconsin and Illinois. Of those units 58 stores are in Minnesota's Minneapolis-St. Paul metropolitan area. The small River City of Stillwater, which has 18,000 residents, is located 20 miles east of downtown St. Paul.

The Cub Foods' giant shopping cart is actually a parade float, as you can see in the photograph at the top of this piece.

The cart is motorized. But unlike the 454 Chevy engine on Save Mart's "Hot Rod" cart, which CEO Bob Piccinini told us in June allows it to hit upwards of 100 miles-an-hour (if anyone is crazy enough to attempt it), the Supervalu-owned chain's version instead has a tiny motor that moves the float/cart along at a standard parade speed or pace.

We do know the fun part was experienced because according to a group of parade spectators we talked to today, the giant shopping cart appeared to receive a good deal of attention and created lots of smiles among parade-goers, the viewers told us. 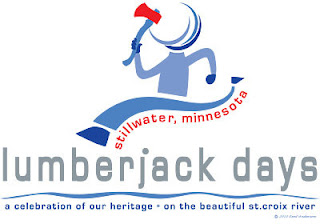 The annual Lumberjack Days Grand Parade is part of an event-packed five day festival in Stillwater, Minnesota called Lumberjack Days. You can see just how event and activity-packed the annual celebration of the city's heritage is by taking a look at its website here.

A number of residents of Stillwater and the surrounding area were concerned that the fast-rising St. Croix River might interfere with this year's Lumberjack Days celebration and parade, particularly after the city had five inches of rain on Friday, July 19.

But event organizer Dave Eckberg says there was no way he and his team were going to allow heavy rains and a rising river to stop the popular annual celebration of the city's heritage, which has as its title sponsor this year Supervalu, Inc. competitor Walmart Stores, Inc.

A little irony: Supervalu, Inc. is headquartered in nearby Eden Prairie, Minnesota. It's not only the dominant grocer in the state but also one of the top employers in Minnesota. It's the home state grocery chain.

It's CEO, Craig Herkert, was a senior executive at Bentonville, Arkansas-based Walmart Stores, Inc. before taking the top spot at Supervalu, which owns Cub Foods and other chains like Albertsons, Save-A-Lot, Shaw's and numerous others.

One of the key states Walmart's U.S. division is putting a major focus on in terms of growing its food and grocery retailing presence nationally is Minnesota, which is the major reason it's the top-sponsor of Lumerjack Days this year. Walmart is the market share leading seller of groceries in the U.S. Supervalue, Inc. is neck-to-neck with Safeway for the number four slot. Kroger is number two. Costco is number three.

On Friday July 19th Lumberjack Days' organizer Eckberg said, "We're not compromising the event in any way. We're actually really excited about the possibilities [presented by the rising river]. The concert venue is moving west, away from the the river about 200 feet. We're clearing three parking lots and closing off most of Water Street. We'll still be right downtown, East of main Street and all events remain on schedule."

That's a spirit the town's original Lumberjacks would be proud to know still exists in Stillwater.

And we bet Supervalu's Cub Foods' chain would like to see some of that "can do" spirit in its stores, with locals filling regular-sized shopping carts to the brim, having been inspired by viewing the Supervalu-owned chain's Giant shopping cart float in today's Lumberjack Days parade.
Posted by Fresh & Easy Buzz at 6:10 PM