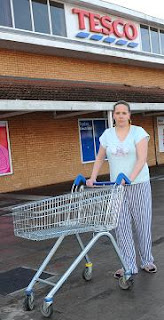 United Kingdom-based Tesco, the parent company of Fresh & Easy Neighborhood Market USA, is making waves at home in Britain over a ban on wearing pajamas that one of its stores, a Tesco Superstore in St. Mellons, Cardiff, enacted last week.

At the Cardiff Tesco store, Elaine Carmody (pictured at left), was escorted out of the store and off the premises by store workers for breaking the new dress code prohibiting the wearing of pajamas (pyjamas in Britain) and other nightwear.

Here's a selection of press clippings about the Tesco store ban on wearing pajamas while shopping.

What quickly became a favorite topic in the British press last week, the Tesco store's pajama ban, is becoming an even more written and talked about topic in Britain this week after the Daily Mail and The Sun newspapers published stories pointing out that one of Tesco's TV commercials in 2007 featured its pitchman, British actor Martin Clunes, dashing into a Tesco store to pick up some milk while wearing a pair of pajamas.

Another irony of the Tesco pajama ban is that many of Tesco's food and grocery stores in the United Kingdom sell clothing, including pajamas and other nightwear. And Tesco sells some very attractive pajamas in its United Kingdom stores - including some you might not be ashamed to wear out in public.

We're all familiar with the age-old "No Shirt. No Shoes. No Service" policy at American fast food restaurants; a policy that seems to have worked well for both the stores and customers. However, we aren't aware of any fast food shops that will refuse to serve a customer wearing pajamas, either in the U.S. or across the pond in Britain.

Those who have or currently work in supermarkets and other retail stores know all to well the variety of dress, and lack of dress, some customers show up in to shop.

Grocery stores particularly are a human laboratory for the sartorial choices and behaviors of consumers. After all, food stores are a crossroads of humanity. Everyone has to eat - and therefore nearly everyone has to shop.

Pajamas and the evolution of cultural dressing norms

In the case of pajamas though, the attire has undergone a bit of a revolution over the last decade or so. In fact, today one can find designer pajamas that look every bit as nice, or even nicer, than some forms of regular day wear.

Pajamas have also undergone a cultural shift as a form of dress, from being strictly bedtime clothing to today being much more general purpose wear. This change goes hand-in-hand with the higher quality and better looking pajamas we mentioned earlier.

For example, many time-pressed mothers might leave their pajamas on while dropping off the kids at school in the early morning, and then perhaps drop into the grocery store after before returning home.

Additionally, ask any college professor, and he or she will tell you that it's not unusual for a number of students to show up in early morning classes wearing pajamas. Some college professors dislike this trend. Others seem to care less about it.

We've even heard of party's and gatherings in which those invited are encouraged to wear pajamas to the event. This signals a cultural shift away from the view that pajamas are attire designed to wear just for bedtime.

So we ask: With all the cultural changes pajamas have undergone, and are undergoing, as a form of dress, does it really make sense for a retailer like Tesco to ban shoppers from wearing them like its store in Britain has done?

Or do any of those changes matter? Is the Tesco store right to have banned customers from shopping-while-wearing-pajamas?

And even further, we ask: Should all supermarkets ban shoppers from wearing pajamas and other nightwear in their stores?

Tell us what you think on the topic using the comments box below. Opine away.

I go to the F&E by my house in pyjamas occasionally. Look, as long as the body is covered and there's nothing inappropriate going on, why rock the boat by making rules which are designed at best to simply lord over those who feel they are already dressed? I mean they should check out People of Wal Mart and see what kind of abominations can occur involving fully-dressed people. The girl in your image up there looks decent, which should be the only requirement. Like you said, everyone's got to eat/shop, and honestly if Tesco wants their customers' money the most they should do is restrict clothing that might harm someone or is clearly inappropriate (see link above).

I once saw Hugh Hefner wearing his signature pajamas while shopping with his TV girlfriends in a Gelson's in Southern California. Hugh and the girls looked to be buying at least a grand worth of groceries too. Wearing pj's or not that's good business.

Agreed with SilentPyjamas on "People of Walmart". This is America. We invented the casual wear. Not to mention free speech.

If they try that no jammies in F&E here, they'll be knee deep in lawsuits. Heh.

It's a slippery slope.

I can't wear my clean and attractive pajamas at Tesco but I can wear my torn and dirty jeans?

I guess I can wear my daisy duke short, short cut offs but not my designer pajamas?

That's the slippery slope. Once you start down this ban road where do you end it?

The customer they tossed from the store is dressed far better than many who come into the supermarket where I work, pajamas or no pajamas. Seems silly they would ban her from shopping at the store. Guess Tesco has plenty of business.

LOL - if only she was wearing the Pajama Jeans!

Those pajama jeans demonstrate how pajamas are much more than a type of apparel to where to bed. Would Tescos kick me out if I wear those shopping?

I'm going to order a pair. Thanks for the link.

Knew it would be just a matter of time before somebody tested Tesco on this: http://tinyurl.com/yzc49qj