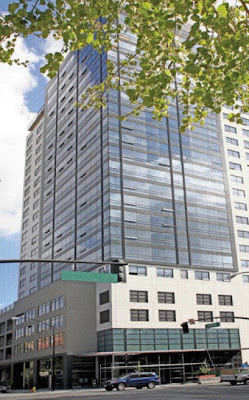 Pleasanton, California-based Safeway Stores, Inc., which operates about 1,715 supermarkets in the U.S. and Canada, with about 1,000 of those stores located in the Western U.S., today publicly confirmed to Fresh & Easy Buzz a couple news reports published on January 27-28 in two San Francisco Bay Area , California newspapers (and way back in June, 2008 in Fresh & Easy Buzz) that it plans to open its second "The Market" small-format food and grocery store this summer. Those reports are here: Safeway to move into San Jose's 88 tower (Biz Journal); and here: Safeway coming to downtown San Jose, officials say (San Jose Mercury News).

The about 24,000 square foot store, to be called "the market by Safeway," will be located in downtown San Jose, California. It will be the ground-floor retail anchor of the "88," a new condominium tower (pictured at the top) located on San Fernando and Second Streets in the city's downtown, as we reported in our June, 2008 story. Safeway plans to open the store in the building in the mid-to-late summer of this year, it confirmed today.

But this development shouldn't be a surprise to Fresh & Easy Buzz readers. We reported the news that Safeway was planning to open its second "The Market" small-format food and grocery market in the downtown San Jose condominium tower in this story [Breaking News: Safeway Stores, Inc. Nearing Negotiation End-Game For its Second Small-Format 'The Market' Store Site; This One in San Jose, California] on June 5, 2008. We even included a picture of the condo tower -- the one at the top of this story -- in the piece.

Additionally, It was over a year ago in January, 2008 when we first reported Safeway Stores, Inc. had hired the San Jose-based Cornish & Cary commercial real estate firm to locate about five sites in the Bay Area for the supermarket chain's initial "The Market" format stores in the region. We identified downtown San Jose as one of five potential sites then, naming the specific site later and then reporting and writing about it more fully in June, 2008.

The downtown San Jose condominium tower site will be the first Northern California or Bay Area site where Safeway will open one if its "The Market" small-format stores. As we've reported on and written about, the grocery chain's first "The Market" format store, "the market by Vons," opened in the fall of 2008 in Long Beach, in Southern California. Safeway is headquartered in the San Francisco Bay Area city of Pleasanton, which is about a 45 minute drive from San Jose.

As we reported in our June, 2008 story about the downtown San Jose "the market by Safeway," it will be bigger than the "market by Vons" in Long Beach. That's because the Long Beach store went into an existing, older and smaller Vons banner supermarket. The San Jose space is being designed from the ground-up in existing retail space on at the bottom of the condominium tower. The Long Beach small-format store is about 15,000 square feet. Plans call for the San Jose "The Market" format store to be about 24,000 square feet, which is still much smaller than the average new Safeway supermarket, which ranges from 45,000 -to- 60,000 square feet.

The San Jose "the market by Safeway" also will feature some expanded sections, particularly basic grocery, produce, meat and non-foods, as compared to the Long Beach "The Market" format store. The reason for this is because although there is a supermarket just a half-block away from where "the market by Safeway" will be located in downtown San Jose, that supermarket, a Zanotto's store, has an upscale and specialty focus, although it also stocks a selection of basic food and grocery products. Zanotto's is a well-established, longtime multi-store independent grocery chain based not far from San Jose in the coastal city of Scott's Valley, California.

In this early December, 2008 story we wrote about how Safeway CEO Steve Burd said the supermarket chain was learning much about small-format food retailing from the Long Beach store. We can tell readers that Safeway plans to put much of what it's learned thus far from that store into changes in the San Jose "the market by Safeway" when it opens this summer. One hint from some recent reporting: Look for a greater selection of basic food and grocery items at value-oriented prices in the downtown San Jose "The market" store, as compared to the Long Beach, California "the market by Vons."

Having "the market by Safeway" so close to its downtown San Jose store could be a problem for Zanottos. The store has struggles in the location and even received a subsidy from the city's redevelopment agency in order to open in 1997.

Safeway continues to plan to open additional small-format "The Market" stores in the San Francisco Bay Area, as well as in Southern California. The retailer is taking a slow and cautious approach its "The Market", using it as fill-in type format while remaining focused on its Lifestyle format supermarkets in terms of its primary retailing focus. [Read the December 12, 2008 story linked below for further details.]

We will have additional reporting, writing and analysis on Safeway's "The Market" and the upcoming new downtown San Jose, California store in a soon to come story.

Linkage - Below are some past, related posts from Fresh & Easy Buzz on Safeway's "The Market."