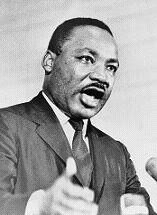 A young African American man, not yet old enough to vote in the 2008 Presidential election last November, was asked during yesterday's pre-inauguration celebration and concert at Washington D.C.'s Lincoln Memorial what he thought about President-Elect Barack Obama becoming the first black President of the United States when he takes the oath of office tomorrow, Tuesday, January 20.

Without skipping a beat that young man -- born long after the institution of black slavery was abolished by Abraham Lincoln; long after the segregationist Jim Crow laws, which among other forms of racial discrimination allowed "White's Only" and "Colored Only" bathrooms and drinking fountains to exist in America, were abolished; long after the U.S. Supreme Court passed the landmark anti-segregationist Brown v. Board of Education ruling; and long after President Lyndon B. Johnson signed the civil rights bill and voting rights act into law in the 1960's -- replied to the reporter: "Dr. King walked so that Barack Obama could run."
That simple, one sentence answer spoken by a young African American man, who despite being born into a far more racially different America than his parents and grandparents were has learned his and America's history, perhaps says as much or more than the reams of words and paragraphs being written today, and that will be written tomorrow and over the next few days about tomorrow's historic inauguration of Barack Obama as the 44th President of the United States of America, can and will say.

Today we celebrate the birthday of Dr. Martin Luther King, Jr. Had he not been shot down by a gunman in the prime of his life Dr. King would be 80-years old today. With longevity being what it is today, had he not been assassinated about four decades ago, Dr. King could very well have attended tomorrow's swearing-in of America's first black President, Barack Obama, the son of an African man from Kenya who left his son shortly after birth and a white mother from Kansas in America's heartland.
Dr. King certainly did much walking in his lifetime, most of it in the form of his tireless leading of peaceful marches and demonstrations for a better America. Dr. King's advocacy and leadership was certainly designed primarily to win equal rights for African Americans and other people of color. But it was far more than that. Dr. King's mission was to create a more perfect union -- a more just and therefore better America. That is important to remember today as we celebrate the birthday of this great American, who in addition to doing much walking and marching also ran hard himself -- until the very end. 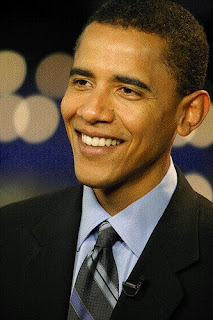 Tomorrow Barack Obama, who's campaign for the Presidency was consistently built around the premise of creating a more perfect union for all regardless of skin color, ethnic background, economic status, gender or sexual persuasion, takes the oath of office in what is going to be a frigid Washington, D.C. morning and early afternoon.

Today the nation's capital is packed with millions of Americans from throughout the land -- from California, Nevada and Montana in the west, Kansas, Iowa and Illinois in the heartland, and New York and numerous other states in the east. Others have traveled from throughout the world -- Europe, Latin America, Africa and Asia -- to witness the swearing-in of America's 44th President tomorrow. Only 43 other men before him have served in the country's highest office.
Sometimes the calendar works in interesting ways. Just one day before the United States welcomes its new President, Barack Obama, the first man of black skin pigmentation to assume the Presidency, we celebrate the birthday of Dr. Martin Luther King. As the young man said at the Lincoln Memorial yesterday: "Dr. King walked so Barack Obama could run."
The young man's simple, one sentence answer to the reporter's question couldn't be more true. And the fact we celebrate Dr. King's birthday the day before Barack Obama becomes the 44th President of the United States is a perhaps once in a lifetime calendar constellation we shouldn't let pass us by without reflection.
In his famous "I have a dream" speech given during the "March on Washington" at the Lincoln Memorial in Washington, D.C. on August 28, 1963 -- that very same Lincoln Memorial where the young man answered the reporter so simply yet so eloquently yesterday -- Dr. King said:
"And as we walk, we must make the pledge that we shall march ahead. We cannot turn back. There are those who are asking the devotees of civil rights, "When will you be satisfied?" We can never be satisfied as long as our bodies, heavy with the fatigue of travel, cannot gain lodging in the motels of the highways and the hotels of the cities. We cannot be satisfied as long as the Negro's basic mobility is from a smaller ghetto to a larger one. We can never be satisfied as long as a Negro in Mississippi cannot vote and a Negro in New York believes he has nothing for which to vote. No, no, we are not satisfied, and we will not be satisfied until justice rolls down like waters and righteousness like a mighty stream."
America still has some miles to travel, more "walk-to-walk," before we can say we truly judge all people not by the color of their skin but by the content of their character, as Martin Luther King, Jr. dreamed.
But today, as we celebrate the birthday of an American King, and tomorrow, when we celebrate the inauguration of Barack Obama as the 44th President of the United States of America we can say we've taken steps to become a more perfect union.
Yesterday at that pre-inaugural celebration and concert at the Lincoln Memorial, President-Elect Obama who has molded himself in many ways after the President who saved the union and abolished the stain of slavery following the bloody civil war, said in a brief speech: Regardless if we are Democrat or Republican, black, white, Hispanic or Asian, rich or poor, gay or straight, disabled or not, we need to come together as Americans, as the United States of America, in order that we can work together and form a more perfect union."
And tomorrow, when he gives his inaugural speech as President of the United States of America, after having taken the oath of office having placed his hand on the very same bible used by Abraham Lincoln when he was sworn-in as President, the then 44th U.S. President, Barack Obama, will call for a new era of American responsibility. It's up to us, as it really always has been.
We all must work towards the goal of making a more perfect union -- disagreeing with each other but not being disagreeable -- as America begins a new era with so much to do, yet filled with so much promise. The times today call for it more than ever.
As Dr. King said 45-years ago on that August day at the Lincoln Memorial in Washington, D.C.:
"When we let freedom ring, when we let it ring from every village and every hamlet, from every state and every city, we will be able to speed up that day when all of God's children, black men and white men, Jews and Gentiles, Protestants and Catholics, will be able to join hands and sing in the words of the old Negro spiritual, "Free at last! free at last! thank God Almighty, we are free at last!"
We're getting there Dr. King. Happy Birthday.
Posted by Fresh & Easy Buzz at 4:09 PM