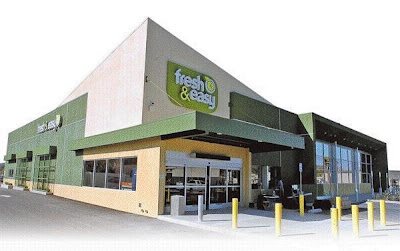 Blogger Rick, who describes himself in his Blog, "The Redeemer Project: My (mis) adventures and (in) coherent ramblings about the Kingdom," as a "Husband, Father, Son, Brother and the Holy Ghost, Amen," offers a post this week in his Blog about Tesco's small-format Fresh & Easy Neighborhood Market combination fresh food and grocery stores and Wal-Mart's Neighborhood Market (standalone) supermarkets.

In an ironic twist to this name game, Tesco originally planned on calling its Fresh & Easy stores -- it currently has 107 of the stores in Southern California, Metro Las Vegas, Nevada and in the Phoenix Metropolitan region in Arizona -- "Fresh & Easy Community Market." However, after conducting some focus group research Tesco decided to use "Neighborhood Market" rather than "Fresh & Easy Community Market" as the name because it has said the word "Neighborhood" was overwhelming preferred by the focus group participants.

A little more name game irony: Last year Wal-Mart opened a test food store format in Texas designed to cater to Hispanic or Latino consumers. That store, located in a converted Wal-Mart Supercenter, is named Wal-Mart "Hispanic Community" Grocery Store. [We posted about the store's opening in this piece in May, 2008.]

Wal-Mart currently has 145 of its Wal-Mart Neighborhood Market supermarkets open in the U.S. The majority of the stores are located in the southern U.S., but the retailer has them located in many other U.S. regions as well, including operating a number of the supermarkets in the Phoenix, Arizona Metropolitan region and a couple in the Las Vegas, Nevada region, which are two of Tesco Fresh & Easy's three market regions. For Wal-Mart, the "Neighborhood Market" format supermarkets are a small but important part of its overall food and grocery retailing strategy. Fresh & Easy Neighborhood Market is currently the only format Tesco operates in the U.S. 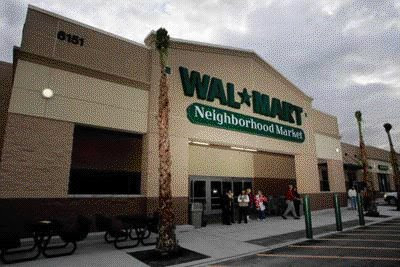 That multi-format strategy is led by Wal-Mart's thousands of mega-Supercenters located throughout the U.S., and with its Sam's Club big box club stores. Wal-Mart also sells a limited assortment of food and grocery items at its discount format stores. And of course it has now created Marketside. As we've previously reported in this September, 2008 piece [Special Report: Wal-Mart, Inc. Studying Second Small-Format Food and Grocery Store Concept; the 'Bodega' or Modern Version of the Corner Grocery Store], Wal-Mart is currently working on the development of two new formats. One is an about 30,000 -to- 35,000 discount food and grocery market geared to Hispanic consumers. The other, in its very early stages, is a smaller version of a Supercenter, sort of a discount store focused mostly on food and groceries.

The Wal-Mart "Hispanic Community" Store in Texas is a large format store at about 160,000 square feet though, and addition to its focus on Hispanic food and grocery items the store also offers a strong selection of non-foods geared towards Latino shoppers, along with lots of "non-Hispanic" basic food, grocery and general merchandise items. Picture it as a Wal-Mart Supercenter with a major emphasis on Latino food, grocery and non-food items but also a strong selection of mainstream products as well.

But back to Blogger Rick. Rick, who not too long ago moved from East Texas to the west coast, says one of his goals in starting his The Redeemer Project Blog was is to give friends and family back home "a peek into the really normal parts of my new 'West-Coastish' lifestyle that are sort of cool."

In his post this week he talks about one of those aspects of his new "West Coastish" lifestyle -- grocery shopping.

Rick says in his post he has shopped at both Tesco's Fresh & Easy Neighborhood market and at Wal-Mart's Neighborhood Market.

Click here to read Rick's post in his "Redeemer Project" Blog in order to find out the answers to those questions -- and more.

[Fresh & Easy Buzz Editor's Note: Fresh & Easy Buzz occasionally runs posts from other Bloggers as part of our "Bloggers-At-Large" feature, which is designed to publish other voices on the Blog. If you have written a relevant story, or read one you think would fit into our format, feel free to e-mail it to us at freshneasybuzz@yahoo.com. We reserve the right to select the Blog posts we publish, of course, based on our editorial standards and judgement. Additionally, we publish the posts only sporadically, since the majority of our editorial content is original.]

But I did go to FNE tonight to buy organic honey! Thanks for the link!

Where is the F&E store in the pic? It's one of the better looking ones on the outside. I work at a Vegas F&E that was converted from an old supermarket.

The store is in San Diego County. It's a ground up store, not a conversion. It's a beautiful store, lots of skylights and huge windows. I haven't been to another one I like as much, except maybe Laguna Hills.

I worked at the newest store in Indio, also is a ground up built store. Looks similar to that one in SD County. Same skylights, big windows. Now work in one of the stores that's a conversion. It's so not as nice as the Indio F&E.