Merchandising Report: Touch Me and I'm Yours 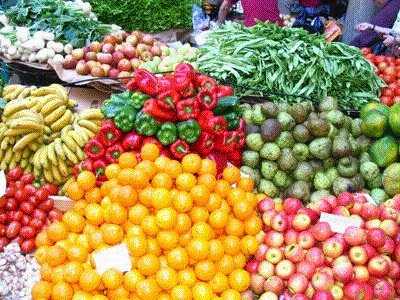 This fresh produce says: Touch me, fondle me, caress me. I'm farm fresh, ripe, succulent and delicious. Go ahead, feel me and see for yourself. Touch me and make me yours.

Two Ohio State University researchers conducted an experiment recently in which they set out to test the proposition that consumers are more likely to buy an item in a store if they first touch and fondle it. All good food and grocery merchandisers know this, which is why good produce department managers and others build massive displays of product, creating not only a visually appealing, but also a tactile opportunity for shoppers to interact with the product. It's all about appealing to shoppers' senses - visual, touch, taste, smell.

The two Ohio State researchers also say they found an even more interesting result from their study: That shoppers are willing to pay more for an item if they touch it first. They suggest handling an item in a store creates an attachment between the shopper and the item touched, which leads that shopper to be more likely to buy the item, and to even pay a higher price for it, than if he or she hasn't touched or handled the item first.

Fresh & Easy Buzz isn't sure we completely buy that finding based on the study. We think there might be some third variables involved. For example, we suspect the retail price of the item, touched or not, plays a major part in the consumer purchasing decision. We also suspect a key variable is whether or not the shopper planned to purchase such an item prior to entering the store. In other words, how much of the purchase decision is pre-planned vs. impulse.

We do believe, based on extensive experience though, that shoppers will purchase higher priced food and grocery products such as fresh produce, specialty foods and related items, if they are displayed in a visually appealing way that encourages shoppers to pick-up and touch the items. And we all know food tastings, which appeal to another human sense, taste, work to sell product, not to mention the power of smell, say fresh bread baking in the in-store bakery.

For example, we've done experiments at retail in which we've placed identical quality items next to each other, in which one display is "plain Jane" and the other visually attractive and designed so that shoppers are tempted to touch the items in that display. (We've also used simple, cute signs on the displays that say "touch me." They work.) We then observed the shoppers. Overwhelmingly they pick up, touch and buy the items in the more appealing display, which also are priced higher than the identical items in the less than appealing display next to it, and in most instances shoppers purchase the more expensive item they've touched rather than the identical item next to it which is priced for less. Again, it's all about appealing to the human senses, in this case visual and tactile.

In these retail experiments we've noticed that a key variable is the difference in price between the two items in the displays. Shoppers tend to go for the higher priced (more visually appealing and tactile-encouraging display) if its no more than about 30% higher than the other display (the "Plain Jane"). But when we doubled the price on items the shopper purchasing behavior dropped significantly, even though a number of shoppers still picked up the items in the more appealing displays.

Despite our cautions as to the Ohio State researchers' results, what the researchers found in their controlled study is similar to what we've observed in the retail experiments we've done and described above. That in part is why Fresh & Easy Buzz was interested in the researchers' work; and why we are publishing it in this piece.

Andrea Thompson, a staff writer for the Web site LiveScience.com has an overview piece on the Ohio State Researchers' study. You can read that piece here. There also are links to the actual study there.

The Ohio State researchers used non-consumable products in their study, such as a coffee mug. However, when it comes to tactile sensations, as every good food and grocery merchandiser knows intuitively, fresh foods and packaged goods are the perfect vehicle for merchandising in ways that encourage shoppers to interact with the items.

But good food and grocery merchandisers also know that in tough economic times like today economics plays a major role in shopper purchasing decisions regardless if they touch an item or not. But we do believe touch is such a key aspect to shopping (just watch women shop in a clothing boutique, or men in a sporting goods store, for example) that we suspect when it comes to higher prices goods many shoppers are avoiding touching items they want but know they can't afford in this current down economy. Why create an attachment to those $250 designer stiletto high heels, or that $200 golf putter -- or even those $6.99 per pound organic purple heirloom tomatoes we avoided touching (and buying) at Whole Foods Market the other day -- when you know you can't (or shouldn't) afford to purchase them, after all.

The Ohio State research, along with our explanations of the experiments we conducted at retail, are important pieces of information for retailers and merchandisers of all sorts though in bad economic times like the current recession. That's because when sales are down across the board like they are currently, and in particular in the case of higher margin food and grocery items, it's even more important to get creative in terms of merchandising and display building.

Retailers and other merchandisers need to wake shoppers up in-store right now like never before with visually appealing and tactile-encouraging displays and other forms of merchandising. That's where the added and incremental sales will come from.

For those retailers and outside merchandisers reading this, we suggest you try some of the experiments we've described. Use cute and humorous signs on a display that ask shoppers to "touch me." Take an item you sell on the shelf everyday say for $1.59. Build an attractive and tactile-encouraging display using it, then mark the item up to $1.99 and see what happens. Even try this: Put a sign on that display that says: "I might not be cheap...but I'm worth it... Touch me and find out for yourself." Tough times require innovation and creativity.

And for shoppers, beware of displays like the one we just suggested above. Don't let such "merchandising" force you to spend more money than you need to at the grocery store. Compare product quality, container size and price. And remember, when you see displays in a store like we've described, know they are there to encourage impulse buys. But don't avoid such displays completely, as grocery retailers often use displays to offer some of their best deals in-store.

One thing is for sure: touching, including touching products, is something that's innate to us as humans. That much every schoolboy knows.
Posted by Fresh & Easy Buzz at 3:25 PM