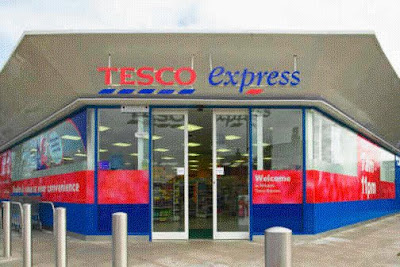 Tesco, parent company of Fresh & Easy Neighborhood Markets, modeled its Fresh & Easy store format in the USA to a certain extent on its existing Tesco Express convenience-oriented grocery store concept in the UK. Tesco Express stores are essentially a hybrid traditional convenience store/small-format neighborhood grocery store. Sound familiar?
There are differences however between Tesco Express and Fresh & Easy. The main two differences are in the areas of basic grocery selection and pricing, and prepared foods offerings. Fresh & Easy sells a slightly more extensive line of everyday grocery products than Tesco Express stores do, and puts more of a focus on lower pricing of those basic grocery items than does Tesco Express.
Second, Fresh & Easy offers a more extensive line of prepared foods than Tesco Express stores do. However, the similarities between the two Tesco, small-format, convenience-oriented stores far exceed their differences.
The Tesco Express format has been extremely successful in the UK; so much so that the company has extended the format throughout parts of Eastern and Western Europe.
Now, according to today's Financial Times, Tesco is taking its Tesco Express format to China, the world's most populated country. The British retailer already has 50 of its hypermarkets--huge stores that carry everything from groceries to electronics, clothing and much more--located throughout China. The British retailer plans on building more hypermarkets in the country, but also wants to tap into the growing desire for more convenience-oriented shopping among China's growing middle class.
Tesco, the third largest retailer in the world, number one global retailer Wal-Mart, and French retailer Carrefour, number two in the world, are locked in a major competitive battle in China. Wal-Mart currently has 100 hypermarkets which it owns completely in China, and owns 35% of 102 Trust-Mart stores, a local Chinese chain. Carrefour has 100 hypermarkets in the fast-growing country, along with owning 300 "hard discount" stores under the Dia name.
The move into the smaller Tesco Express stores in China will allow Tesco to better compete with Wal-Mart and Carrefour overall, as the smaller stores take less time to build than hypermarkets and can be located in much smaller locations, such as in urban areas.
Further, by adding the Tesco Express stores to the mix in China, it will give the retailer a multi-format strategy rather than a single format one, which currently exists with just having hypermarkets in the country.
Read the Financial Times piece here.
Posted by Fresh & Easy Buzz at 4:00 PM