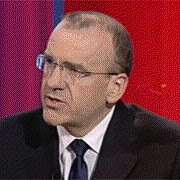 Tesco chief executive officer Sir Terry Leahy (pictured left) on Monday told Britain's Jeff Randall, host of the popular Jeff Randall Show on Sky TV, that 2008 is going to be a tough year all around for retailers, including grocers.

Sir Terry told Randall that shoppers are spending less because fears over the economy are convincing them to tighten their purse strings and belts. "Consumer confidence is way down," the Tesco boss added.
Sir Terry said value is key at present. "People are looking for value, and are probably changing the things they're spending on," he said.
Read Tesco chief Sir Terry Leahy's full interview on Britain's Sky TV's Jeff Randall Show here.
Posted by Fresh & Easy Buzz at 7:49 PM