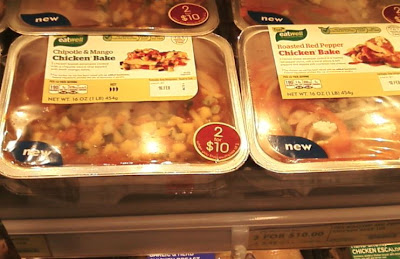 Tesco's Fresh & Easy Neighborhood Market has extended its eatwell healthy foods' private brand into the fresh meat category, with the launch of a new line of Chicken Sausages and two value-added meat lines - eatwell Chicken Bake and eatwell Chicken Stir Fry (pictured above and below) - into its 182  fresh food and grocery stores in California, Nevada and Arizona. 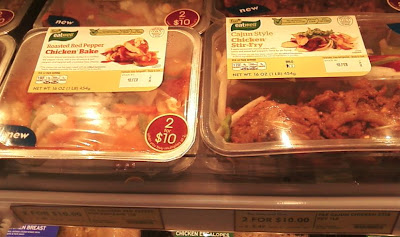 The eatwell Chicken Sausages line, which hit some Fresh & Easy stores last week and others this week, based on our regular store visits and conversations with store workers, includes varieties like the Mild Italian and Apple Cinnamon varieties pictured below. 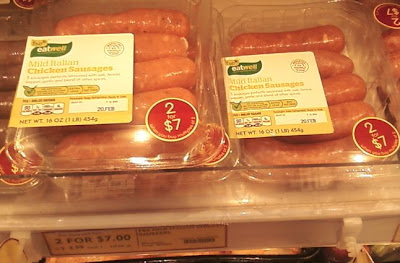 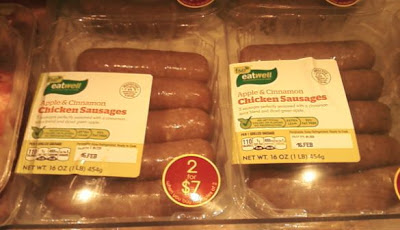 The Chicken Bake items, which include a tray for cooking in the oven, and the eatwell Stir-Fry SKUs come in varieties like the Roasted Red Pepper, Chipotle and Mango and Cajun-Style, pictured at top.
Fresh & Easy Neighborhood Market is currently featuring the eatwell sausages at a 2-for-$7 (16oz pkg.) introductory price. The Chicken Bake and Stir-Fry items, both of which as also 16oz, are being offered at a 2-for-$10 introductory price in the stores.

The extension of the eatwell private brand - Fresh & Easy uses F&E as a co-brand on the items - into the meat and value-added meat categories is part of a major expansion of the brand, which the El Segundo, California based grocery chain began in December 2011.

Up until late last year the grocery chain offered just a few eatwell items in the dry grocery category, such as canned chili and snack crackers.

The grocery chain also promoted its eatwell healthy foods' brand in January (see the instant oatmeal and cereal endcap display below, for example), offering numerous items at sale prices in its weekly advertising circulars and via its "Friends of Fresh & Easy" e-mail flyer, which it now combines with its "Friends" loyalty/rewards card. 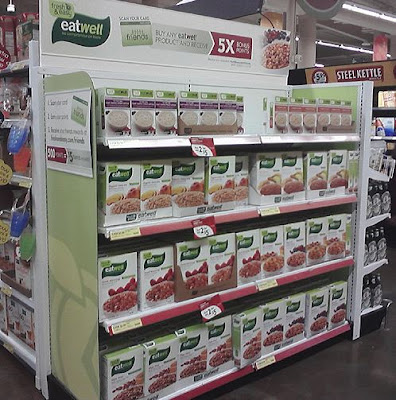 For example, for about three weeks last month Fresh & Easy promoted its eatwell frozen meals, which as we reported here the grocer introduced in September 2010, a month after it extended the healthy foods' private brand into the dry grocery category in August 2010, in its stores, as well as featuring them in the two promotional media vehicles noted above.

As you can see in the photos below, which were taken at a store in Northern California on January 7, 2012 by Fresh & Easy Buzz's senior correspondent, Tesco's Fresh & Easy gave its eatwell brand frozen meals multiple facings and plenty of freezer case space during the January 2012 promotion. 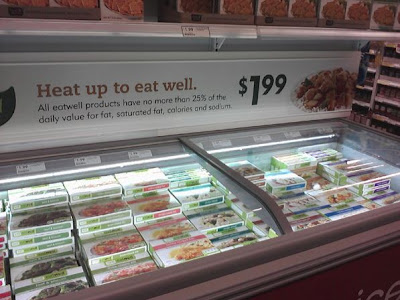 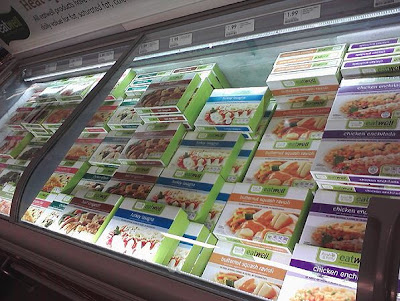 Tesco's Fresh & Easy announced the launch of the eatwell brand not long after the publication of our April 1, 2010 story.

By extending its eatwell brand into the meat and value-added meat, the healthy foods private brand is now represented across all consumable food categories at Tesco's Fresh & Easy - dry grocery, frozen foods, perishables- refrigerated, produce, fresh-prepared foods and meat, which is something we reported over a year ago that Fresh & Easy Neighborhood Market would do.

Take a look at this piece we published in February 2011: Getting There First...Plus, Are Tesco's Fresh & Easy and Safeway Traveling Down A Similar Private Brand Aisle?

May 18, 2009: Strategy Session: Tesco's Fresh & Easy Needs to Move From its One Store Brand Fits All Strategy to A 'Three Brand' Store Brand Strategy

I ike the idea of the ready and I suppose easy to use cooking tray (I haven't tried this yet) for the new Chicken Bake items.

On the other hand, Sprouts (and the two remaining Henry's in Temecula) offer a wide variety of chicken suasages from their full service meat case, priced at $2.99 per pound everyday. At Sprouts/Henry's, you can purchase as many (or as few) as you like.

If the $3.50 per pound (or if you have to purchase two packages in order to receive the $3.50 per pound price) price at F&E, and keeping in mind this is the introductory price, then Sprouts and it's remaining two Henry's locations have Tesco's Fresh & Easy beat on price, and in my opinion, service becuase of their full service meat counter.

The buyers and merchants at Tesco's El Segundo, CA United States headquarters need to sharpen their pencil on this one.

The eatwell sausage basically looks to me like a clone of Safeway's Open Nature sausage, which you wrote about and published a pic of here http://freshneasybuzz.blogspot.com/2011/06/safeway-stores-has-picnic-featuring.html