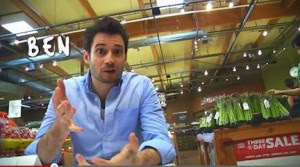 - "Lookin' For Love (in All the Wrong Places)," from the movie "Urban Cowboy." View and listen to the soundtrack here.

Whole Foods Market goes to great lengths throughout the year to get shoppers to love its stores.

But from February 8 until Valentine's Day (February 14) the grocery chain's Southern Pacific Region, which includes its stores in Southern California, Southern Nevada and Hawaii, is giving a little of that love back by launching a video mini-series called, "In the Market - An Organic Love Story," which tracks one man's search for romance in the aisles of a Whole Foods' store.

The video mini-series, which is designed to give food and grocery shoppers "that loving feeling" in the week leading up to Valentine's Day, features the romantic adventures of Whole Foods' shopper Ben (pictured at top) who, aided by his pals Alex and Ted, sets out to find his Valentine before he turns 30 on Valentine's Day.

The first episode in the seven-part video mini-series aired February 8 at http://www.wholefoodslovelocal.com/. A new video is being released on the dedicated website everyday, with the final episode airing February 14, Valentine's Day.

In the mini-series Ben pays far more attention to the women walking the aisles of the Whole Foods' store than he does to the grocer's gleaming displays of fresh fruits and vegetables, the tempting displays of fresh baked goods, and even the huge end-cap displays of snacks and craft beers, although all these features serve as important backdrops in his love search.

Ben particularly seems to have his eye on every girl he sees wearing yoga pants, many of whom he attempts to seduce grocery store-style, offering everything from free wine to gourmet meals at his place.

"For many of our shoppers Whole Foods Market isn’t just where they go to grab all the fixings for dinner - it’s where they go to find the ingredients for love," said Andi Dowda, regional marketing coordinator for Whole Foods Market's Southern Pacific Region, in explaining the logic and strategy behind the creation of the video mini-series for Valentine's Day. "And with romance on the mind this time of year, these films are a fun, light-hearted approach to spreading that love for our shoppers to enjoy."

Marketer Dowda also suggests looking  for love, and meeting a potential mate, at a Whole Foods' store has a compatibility angle to it, saying: "Anyone can find love in the most unlikely places. As our character Ben put it, 'if you meet someone in Whole Foods, at least you know you have one thing in common - you both shop at the same store.'"

The character played by John Travolta in the movie "Urban Cowboy" - the song 'Lookin' for Love (in All the Wrong Places)" at the top of this piece - would likely agree with Whole Foods' Dowda.

"In the Market  - An Organic Love Story" is part of a newly-launched series of mini-documentaries called "Love Local," which celebrates the relationships Whole Foods Market’s Southern Pacific region stores have forged with their local partners, team members and customers, Dowda says. (You can view other videos in the series, along with Ben's search for the love of his life before he turns 30, at the website here.)

Whole Foods' operates on a very decentralized structure. It's regional divisions localize product selection (beyond a required core merchandise mix), merchandising and marketing in a way similar to what an independent grocer based in a given community might do. The system works extremely well for natural grocery chain and is a major key to the grocer's success.

The "In the Market - An Organic Love Story" series was produced for Whole Foods' Southern Pacific region division by Omelet, a Los Angeles, California-based branding, advertising and entertainment company.

We've viewed the first four episodes of the series. The videos are well done, and the writing is of a high-quality.

The marketing message is clear: Whole Foods Market is much more that simply a store to buy food and groceries at - it's a shopping experience. In other words, it ties in with Whole Foods' existing image and the extensive marketing effort the grocer puts forth to reinforce and grow that message and the Whole Foods' brand.

Love, romance, Valentines Day and Whole Foods, all tied together as a video mini-series, is also symbolic of the approach Whole Foods Market takes to food retailing, which is best demonstrated from a merchandising perspective by Co-CEO Walter Robb, who has approached natural and organic food retailing in a passionate and one might even suggest somewhat romantic, yet realistic, way for the three-plus decades he's been in the grocery business.

Food retailing as a passion is also an attribute Whole Foods' co-founder and CO-CEO John Mackey, who held the CEO position for nearly 30-years until asking Robb to share it with him in 2010, has built into the Whole Foods Market culture.

In fact, that shared view of food retailing as a passion, with a little romance thrown in, played a big part in Mackey offering to share the CEO position with Robb, who he personally hired in the early 1990's to supervise the construction of, open and manage the Miller Avenue store in Mill Valley, California.

Food retailing as a passion is real at Whole Foods,' rather than being a marketing or public relations slogan. It's a part of the culture, just like the yoga pants are.

Meanwhile, on Tuesday (Valentine's Day), we'll learn if Whole Foods' shopper Ben finds his "Valentine" on his 30th birthday, or if he will remain single, continuing his aisle-by-aisle, produce department and in-store bakery-to-whole body department search for the yoga pants-wearing girl of his dreams. Stay tuned.

June 21, 2011: The 'Art' in Food Retailing On the First Day of Summer at Whole Foods Market in New York City's Chelsea District

How could you fail to mention THE video about Whole Foods:

We actually posted a link to that video, along with a tweet about it, on our twitter feed shortly after it came out.

We can't write about everything in the blog. But if you follow our twitter, you'll get even more. You don't have to be on Twitter to use it either.