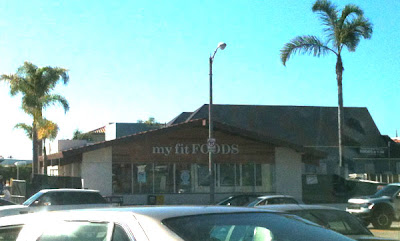 My Fit Foods' first store in California is set to go into the building above in Hermosa Beach, which is in the process of being renovated. [Photo credit: Fresh & Easy Buzz. Photo taken February 12, 2012.]

The Hermosa Beach store (pictured at top), which is currently being renovated, is about a quarter-mile away from the Fresh & Easy Express market on the Pacific Coast Highway, which was opened by Tesco's Fresh & Easy Neighborhood Market on January 11, 2012.

Tesco's Fresh & Easy Neighborhood Market puts a major merchandising emphasis on ready-to-eat and ready-to-heat fresh-prepared foods in both its standard format (10,000 square-foot) grocery markets and in its smaller (3,000 square-foot) Fresh & Easy Express stores, five of which have been opened to date, all in Southern California.
The soon-to-open My Fit Foods store at 1005 Pacific Coast Highway in Hermosa Beach is going into what was until August 2011 a restaurant called Rocky Cola Cafe, which closed then. Prior to that the building housed a Denny's restaurant. The building is about 2,000 square-feet in size, based on our observation.

A Fresh & Easy Buzz correspondent has been monitoring the progress of the planned My Fit Foods store at 1025 Pacific Coast Highway since early January 2012. Three weeks ago the sign depicted in the photograph at top wasn't on the building's facade, for example.

No date has yet been set for the store's opening, according to our sources. But a sign on the building says it's "opening soon." The building's renovation has been steadily progressing over the last few weeks and looks to be nearly completed.

My Fit Foods, which describes itself as a healthy, fresh, pre-packaged takeout meal company and retailer, is currently hiring "front of the house" employees (store clerks) for both its first store in Hermosa Beach and the second unit in Torrance. Starting pay is $10 hour. The retailer also hires what it calls nutritional consultants for each store.

Texas-based My Fit Foods offers a variety of healthy fresh-prepared meals, side dishes, breakfast foods and snacks for takeout.

The foods are prepared in the company's corporate kitchens - and in some cases in-store - then packaged for sale in the stores.

The fresh-made foods, 95% of which the company says are gluten-free, are prepared using lean protein, are low in carbohydrates, and contain heart healthy fats. There are currently about 60 items on the menu, with more being added regularly.

In addition to the fresh-prepared foods, The retailer offers a line of vitamins and nutritional supplements under the My Fit Foods' brand, which is sells in the stores. The vitamins and supplements are part of the overall healthy foods/healthy eating/healthy lifestyle niche the company is focused on.

Besides the standard storefront retailing of the fresh-prepared foods, My Fit Foods also offers shoppers various customized healthy meal plans which they can sign up for, letting the company do the meal planning and food preparation for them. Among those plans is what My Fit Foods' calls its "21-Day Challenge," a three-week, five-meal-a-day program it says will start consumers on the road to healthier eating and better nutrition.

Shoppers can also order the fresh-prepared meals and other foods online, for pickup at the stores.

My Fit Foods recently launched what it calls a corporate wellness division, through which it's offering to provide healthy eating and nutritional benefits to companies, using its fresh-prepared food products as the centerpiece of the program.

The fresh-prepared foods retailer - it currently has about 34-stores in four cities in Texas and recently opened its first store in Arizona (in Scottsdale) and has plans to launch into Nevada, Utah, Idaho and Oklahoma in addition to California - operates on a mixed corporate-owned/franchise model. The majority of the stores are owned by independent operators. The company provides the culinary/product development and the prepared foods, along with merchandising, marketing and other services under the joint-venture arrangement.

In addition to the franchised standalone stores, My Fit Foods is also pursuing the supermarket channel as a source of distribution for its fresh-prepared foods - but not in the traditional on-the-shelf manner.

Instead, the fresh-prepared foods' retailer has a deal with Texas-based supermarket chain H-E-B to put "My Fit Foods" healthy meal kiosks in selected stores. At present H-E-B is testing the kiosks in about eight supermarkets in Texas.

The supermarket kiosk concept is something My Fit Foods is interested in expanding into California, Nevada, Arizona and elsewhere where it plans to launch, signing up a chain in each region to test with like it's doing with H-E-B in Texas.

In Nevada the initial market region focus is metro Las Vegas. In Arizona it's the Phoenix metropolitan region.

Houston-based My Fit Foods was founded in 2006 by certified nutritionist-entrepreneur Mario Mendias, who also spent 19-years' working as a personal trainer before starting the company.

In 2007 Mendias partnered with restaurant industry veteran Anthony Milton, and the two partners and majority-owners launched My Fit Foods as a fresh-prepared foods' retail chain, focused on healthy eating and nutrition.

In describing the start of My Fit Foods Mendias says: "No matter how much I preached to the clients I trained every week that 80% of your results, in regards to your health and fitness goals, are derived from what you are eating, what I found wasn't that they were not listening to me. It was simply that most people just didn’t have the time, knowledge or support to stay consistent with a clean and healthy diet. So, it was simple to me, I decided to do all the healthy cooking for them, and My Fit Foods was born out of my tiny apartment kitchen on Memorial drive in Houston, Texas."

Founder Mendias says his plans are to grow the fresh-prepared foods chain throughout the western U.S., after having what he says is a good reception in Texas.

Additionally, My Fit Foods, which has as its motto, "Eat Fit. Live Fit,  just went live today with a redesigned website.

The franchise model My Fit Foods works on though could help it in competing in the food mecca that is Southern California because under such a system the independent owner-operators share in the financial investment, bearing most of the upfront costs, while the company earns an income stream from providing the concept, culinary development, food, merchandising and marketing to the franchise owners.

My Fit Foods' ready-to-eat and ready-to-heat takeout foods appear to be popular in the four cities in Texas where it has its stores - Houston, Dallas, Austin and San Antonio - based on conversations we've had with customers of some of those stores.

Much of the success of the stores also depends on how strong of a relationship the owner-operators build with customers and potential customers, something independents can be good at when they have their own money on the line. Key to that is also the quality of support they get from the corporate folks.

My Fit Foods wants to open numerous stores throughout Southern California, as well as move into Northern California, using the model it's been following in Texas since 2007, which is to focus on cities and neighborhoods that best fit the healthy, upscale takeout foods' customer demographic and lifestyle.

The company is also in a major growth phase, which is why its expanding into California, Nevada, Arizona, Utah and Oklahoma, according to founder Mendias.

I see that the My Fit Foods California "flagship" location in Hermosa Beach did not open on Friday, February 24, 2012, but it appears that the location is open as of today, Tuesday, February 28, 2012.

This dovetails with the opening of the Torrance location today.

Ironically, the Torrance location could not open unless Hermosa Beach was operating, as the Hermosa Beach location is the central kitchen (for now) used for product preparation/meal assembly for both locations.

As the concept expands, how many locations/stores will the Hermosa Beach location support with product preparation/meal assembly?

As of this posting, the My Fit Foods website does not have any information for the Hermosa Beach and Torrance California locations.

I recently moved to California from Dallas, Tx and LOVE My Fit Foods. I lost 20lbs eating their food. It is delicious, healthy, and I was never starving like on other "diet". It truly is a lifestyle and I've used it to maintain my weight once I reached my goal. I can't say enough good things about it. P.S. The Good Morning Sunshine breakfast is a must try!!

It's hard to say how many My Fit Foods' locations will support the kitchen in the Hermosa Beach store. My take is MFF probably doesn't even know that. Too new to have any sort of estimate/baseline.

I also think it depends on the locations.

For example, the Hermosa Beach store used to be a restaurant, so had a kitchen in it. In contrast, as you can see in the pics in the other stories in the blog on MFF, the Torrance unit is without a kitchen.

They have been having problems with that new website, so that's why nothing about the California stores in detail on it, we are told. Type in California though in the search box and see what comes up.