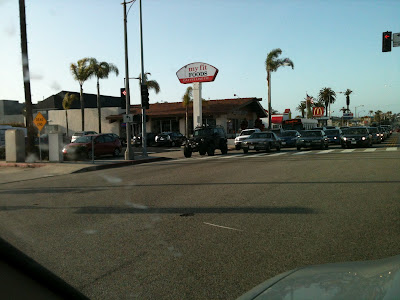 Grand opening events for both stores were held today. 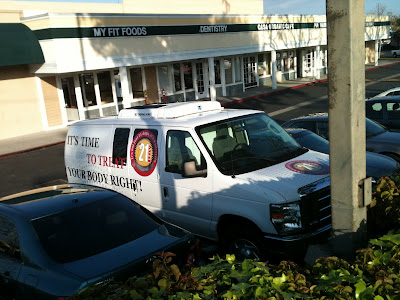 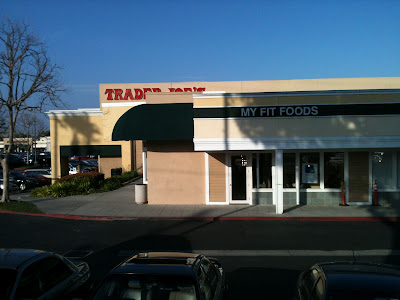 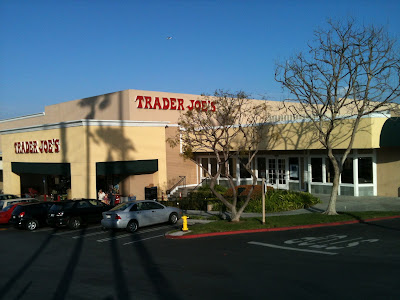 My Fit Foods originally planned to open both Southern California stores Friday, February 24 but delayed the openings until this week. 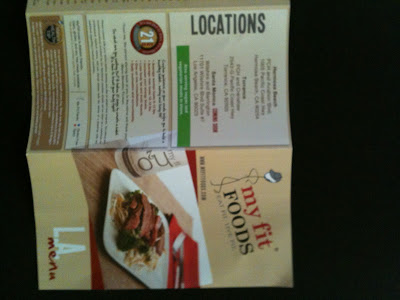 As we've previously reported, My Fit Foods plans to open additional stores in California this year and beyond.

The next store set to open is at Wilshire and Barrington (11701 Wilshire Boulevard #7) in Santa Monica, as noted in the brochure pictured above, which was available today at the Hermosa Beach store. That store is slated to open in a couple months. 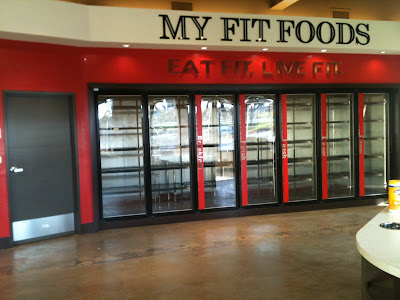 Above: Inside the My Fit Foods store in Torrance, before it opened today. The fresh-prepared foods are stocked in the refrigerated display cases above by day-part - breakfast, lunch, dinner. See the vertical listenings on the case doors. Below: The focus is on takeout, but the Torrance My Fit Foods store also includes eating in at tables and the counter pictured. [Photo credit: Fresh & Easy Buzz, February 19, 2012.] 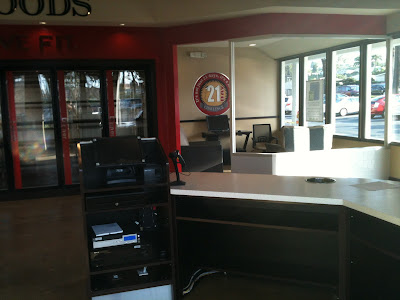 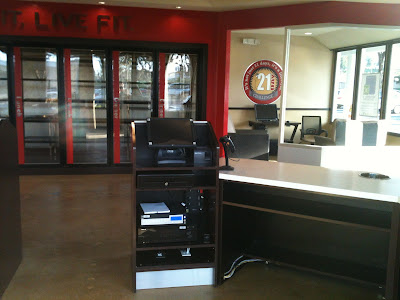 The stores offer fresh, pre-packaged refrigerated meals, side-dishes, snacks and deserts in buildings ranging from about 1,100-to-1,800 square-feet.

In Southern California, the fresh-prepared food iterms, like the pre-packaged Tenderloin Roasted Vegetable Dinner below, are made in a kitchen inside the My Fit Foods store in Hermosa Beach, which is larger than the unit in Torrance. 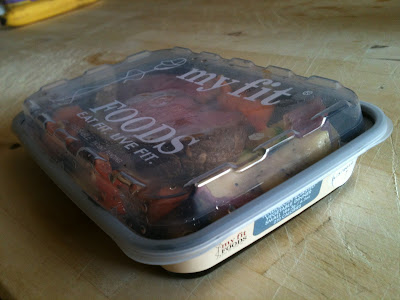 The stick figure graphic on the package is an icon of  founder Mario Mendias. It indicates a meal is a customer favorite. [Photo credit: Fresh & Easy Buzz, February 28, 2012.] 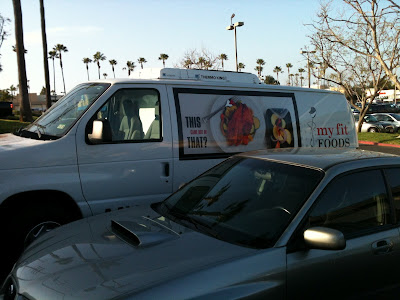 I haven't been by the blog in a while (sorry!), but wanted to comment on the MFF in Hermosa Beach as I just went there for the first time this morning. It is within walking distance of my house (as is the Hermosa F&E Express).

I stopped in for an emergency breakfast on the way to work at around 8:45am. I was the only customer in the store, and the clerk gave me a nice (if nervous) walk-through of the meals, the store's philosophy, etc.

Overall, though, I found the vibe a little strange. Felt like what I imagine old-school "automats" were like. Just banks of refrigerators full of plastic containers.

One thing that I find lacking is there are no glamor photos of how the meals are supposed to look once cooked. The food containers also lack appetizing descriptions of what's inside. (They only contain the name of the meal, and you have to refer to a separate menu for descriptions of each.) All in all, the concept feels like it's almost there, but not quite. Everything about the store -- the logo, the packaging, the menu -- feels a half-step below where it should be. We shall see what happens I suppose.

Regarding the F&E Express in Hermosa, overall I have been quite satisfied with the convenience and the edited product selection is not as lacking as I imagined. One thing I don't like -- certain items are priced higher at the Express store, which I am very disappointed by.

If you don't stop by the blog near-daily like you have in the past, we may be forced to charge you an infrequent users fee.

Basically have to agree with you overall on the My Fit Foods.

For example, they should use the extra space they have to merchandise more packaged food items - healthy snacks, for example - that fit their profile rather than allow it to be so sparse.

There's an old saying in the grocery business, which is -- you can't sell empty space. Another version of that is that it's impossible to increase a customer's average market basket size (amount of stuff she purchases per trip) when you have far from enough to offer.

I don't think the packaged fresh foods look as bad as you do but there's plenty of room for improvement for sure.

What do you think about that?

Yes, definitely agree that more supplemental products -- of any "healthy" sort -- would make MFF feel more like a fully developed food store rather than an automat. Though I wasn't blown away by the experience, I should add the that food I purchased was tasty and satisfying. I definitely won't be in daily, but I can see myself stopping in once a week or so for a meal when I don't feel like cooking and I want something guilt-free. I do wish them the best in their efforts; I'm sure we'll see tweaks over the coming months.

Regarding the F&E Express, yes I have noticed that the circular doesn't match up with prices in the store in some cases, and I find this unacceptable. Sometimes the price differences are significant. For example, one week I believe F&E salsas were on sale 2/$5 at normal stores, but the express store was selling the salsas for $3.49 each. I've noticed price differences on some other items as well, including pasta sauce.

Frankly I don't understand the need for two pricing structures and consider doing such gouging F&E Express patrons. Also, though I am well-versed in F&E's operations since I've developed a strange interest in the chain and read your blog, the average person most certainly isn't, and is likely to be surprised/angry when they receive a circular, visit the store for a specific deal, and find that it's not valid at the Express locations. I'd also think that the varied prices complicate things on F&E's back end operationally, but obviously not sure about that.

All that said, the Express store has been more popular than I thought it would be. For some reason I expected it to be a ghost town but it seems to have a healthy number of shoppers inside whenever I wander by.