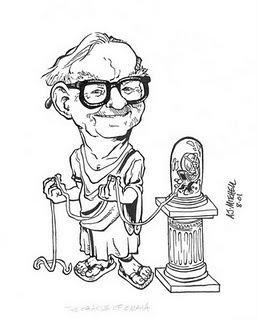 During an interview on the CNBC business network in November of last year famed investor Warren Buffett was asked if he saw any good long-term opportunities in European equities. His response: "If the price came down on some Tesco, I'd buy some more of that."

Buffett has done just that, following last Thursday's 16% drop in the United Kingdom-based global retailer's stock share price, which was the result of Tesco's issuing of a profit warning due to it poor Christmas season financial results at home in the UK, which accounts for nearly 70% of its annual revenue. [See this story for details - January 11, 2012: Tesco Reports 19.3% Comparable Sales Growth at Fresh & Easy Neighborhood Market For 6 Week Holiday Period.]

On Friday, the following day, Buffett increased his stake in Tesco from 3.21% to 5.08%, at a cost of about £500 million ($774 million), according to a required regulatory filing submitted to government authorities by his Berkshire Hathaway holding company, dated January 13, 2012.

Tesco owns and operates Fresh & Easy Neighborhood Market, which is based in El Segundo, California and has 189 stores stores in California (140 units), Nevada (21 units) and Arizona (28 units).

Current plans call for Fresh & Easy Neighborhood Market to close the 12 stores by the end of this month to early February 2012.

Buffett's big buy is an important vote of confidence for Tesco following last week's big decline in its value. After all, when it comes to investing, he is regularly referred to as "The Oracle of Omaha."

Buffett, who also owns around $2.5 billion of Walmart Stores, Inc. stock, particularly likes Tesco's growth prospects in Asia, and most particularly the future growth opportunities afforded the global retailer in China, where CEO Philip Clarke is putting a major focus.

Prior to taking over as CEO from Terry Leahy in March 2011, Clarke was in charge of Tesco's Asian and European operations, along with heading up the retailer's corporate information technology efforts.

It is a stretch though to suggest Buffett's increased stake in Tesco is a specific vote of confidence for its money-losing Fresh & Easy chain in the U.S., however, because the legendary investor has as recently as late last year voiced serious concern over the enterprise.

It is fair to say though that Buffett is bullish enough on Tesco as a whole that he would increase his stake in the company by such a significant amount even though he harbors such concerns over the U.S. chain.

The "Sage of the Plains," another nickname for the man from Omaha, is a long-term value investor. So buying when he did, when Tesco was down by such a significant percentage last week, is classic Buffett. In other words, based on his proven research methods and track record, he knows a deal when he sees one. Buffett's seldom wrong.

But Tesco does face some big challenges, both at home an abroad.

It's competitors in the UK are getting much better and bigger, for example. And Tesco's focus on price-focused promotions, such as its recent 'Big Price Drop" promo, which is being called the "Big Price Flop" in the UK, aren't working so far.

Globally Tesco is focused on breaking even with Fresh & Easy by the end of its 2012/13 fiscal year, which ends in February 2013. It's not going to literally break even by then, in our analysis. And even if it does somehow achieve that objective by closing stores and cutting costs it must figure out a strategy to make its Fresh & Easy chain not only less of a financial drain but also a real contributor and asset to group Tesco.

But for now, in terms of Buffett's vote of confidence in Tesco, "Every Little Helps."

March 3, 2010: Mr. [Tesco] Three Percent Warren Buffett Still Has That 'Oracle' About Him

March 1, 2010: Warren Buffett, 'The Oracle of Omaha,' Wants you to shop at Tesco...But He Doesn't Mind if You Shop at Walmart

February 28, 2009: Warren Buffett: 'Our Country Has Faced Far Worse Travails': A Paralyzing Fear Has Engulfed the Country. But America's Best Days Lie Ahead.'

[Illustration credit: The ink-on-paper illustration of Warren Buffett at the top, titled 'The Oracle of Omaha," is coutesy of artist Andrew Mitchell. You can learn more about his work at his site here.]
Posted by Fresh & Easy Buzz at 5:53 PM