Tesco to Close Up to 12 Fresh & Easy Stores 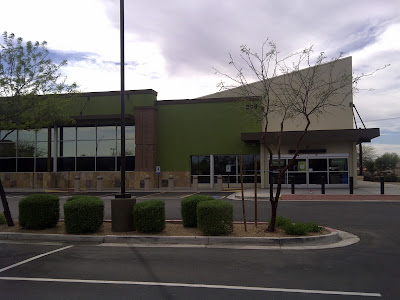 Breaking Buzz
﻿﻿﻿
﻿﻿Tesco plans to close up to 12 underperforming Fresh & Easy stores as part of its strategy to break even financially with its fledgling Southern California-based fresh food and grocery chain by the end of its 2012/13 fiscal year, which begins in late February and runs through February 2013, Fresh & Easy Buzz has learned.

El Segundo, California-based Fresh & Easy Neighborhood Market could announce the latest round of store closures as early as Wednesday, January 11, according to our sources.

From a public relations perspective such spin could go something like this: 'Yes we are closing some stores but we also opened numerous new stores today,' followed by a comment or two on the continuing poor economy in the places where the stores are being closed, or something similar.

Fresh & Easy Buzz is the first publication to report this development. Neither Tesco or its Fresh & Easy chain have announced any plans to close any stores. 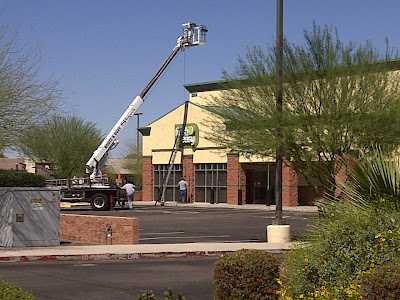 ﻿Tesco closed 13 Fresh & Easy stores in November 2010 but didn't get around to "mothballing" some of the units until much later. Pictured above is the closed grocery market at 3232 East Guadalupe Road in Gilbert, Arizona. A Fresh & Easy Buzz correspondent took the photograph above on March 23, 2011, which is when the crew took down the signs and "mothballed" the store, which was closed five months earlier.﻿﻿ [Photo credit: Fresh & Easy Buzz.]

Tesco closed 13 underperforming Fresh & Easy grocery markets in November 2010 - six units each in Nevada and Arizona and one store in Southern California. Fresh & Easy's CEO, Tim Mason, said at the time the stores would be "mothballed," and possibly re-opened in the future. The grocer still holds the leases on the 13 closed stores. See here and here for details.﻿
﻿ 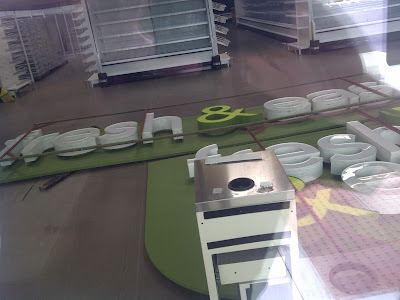 Inside a "mothballed Fresh & Easy store: The unit at 858 South Greenfield Road in Gilbert, Arizona, which was closed along with 12 other stores in November 2010. [Photo credit: Fresh & Easy Buzz.]

If Tesco closes all 12 underperforming Fresh & Easy units currently under consideration, which our sources tell us is probable, that will make for 23 Fresh & Easy stores it's closed since launching the Southern California-based chain in November 2007.

Additionally, Tesco has held back from opening numerous Fresh & Easy locations, some of which has been sitting in various states of completion since 2008-2009. These includes store sites in Arizona, Nevada and California.

That Tesco will close more Fresh & Easy stores comes as no surprise to Fresh & Easy Buzz, since we said in the blog in 2011 that it is one of the things the United Kingdom-based retailer will have to do if it hopes to come close to breaking even with Fresh & Easy over the next 14 months.

This year is a crucial one for Tesco with Fresh & Easy because for all practical purposes it has until the end of December to get to break-even with Fresh & Easy Neighborhood Market because the month of January and partial month of February 2013, when the 2012/13 fiscal year ends, is insignificant. If it doesn't happen by Christmas 2012, it isn't going to happen at all because the month of January 2013 and a few weeks in February aren't enough to make a difference, in our analysis.

Because 2012 is a "make or break" year for Tesco with Fresh & Easy, expect to see other significant changes being made, in addition to the latest round of store closures.

The half-year loss amount is 23% less than Tesco lost on Fresh & Easy in the same period the year before. However, there's no guarantee this trend will continue into the second half of the fiscal year.

All while repeating elsewhere.

In my opinion, it also hurts the brand to have such visible stores (unique architecture) sit vacant.

Who was responsible for their market research that led them to open at these locations? Whoever that was didnt do a very good job if the locations couldnt sustain a market.

I also don't buy the "poor economy" excuse. Valid in the past, absolutely, but all signs show that this isnt the case for 2012.

If you look back over the blog James you'll see we first started suggesting F&E's locations, particularly those chosen in 2008-early 2010, were in most cases at best mediocre and in numerous cases poor, in early 2008.

A number of those locations chosen in 2008 have still not been opened.

But I'm not sure the problem is merely poor locations, as has also been discussed in the blog.

In terms of the market research, Fresh & Easy's real estate folks did that, along with other members of its senior management team. And the buck stops with the CEO, as it should.

In terms of all the vacant locations, yes, very expensive and potentially brand damaging. They removed the signs, ect. from the 13 stores they closed in 2012 and will do the same with these stores. (See the pics in the story, for example.) That helps. But, of course, locals still know what was there.

From an economic standpoint, closing the stores makes better sense - even with the expenses of them being white elephants - than keeping them open, which is why they are closing them.

Will this, the store closings, influence whether or not you shop at Fresh & Easy?